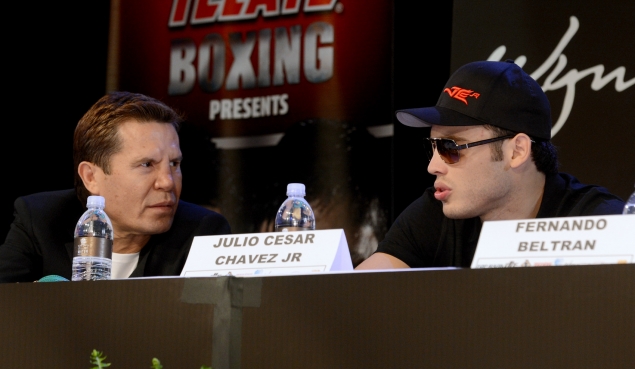 LAS VEGAS — There was a time around two years ago that Julio Cesar Chavez Jr. thought that he would lose his Hall of Fame father to drugs and alcohol.

“I kept thinking this guy is going to die,” Chavez Jr. told sportswriter Norm Frauenheim. “He’s going to die. I got used to thinking about it.”

This, talking about a man whose legendary status in the sport includes being a three-division champion who went 89-0-1 before losing his first bout, and compiled an overall career mark of 107-6-2, with 86 knockouts.

But it was the son who rescued the father, seeking help to have Chavez Sr. sedated and then rushed to a rehabilitation center.

“Right now, our relationship is good,” said Chavez Jr. “It can withstand the disagreements we have.”

A clean and sober Julio Cesar Chavez Sr. will be there on Saturday night, when the 26-year-old southpaw Chavez Jr. (46-0-1, 32 knockouts) defends his WBC belt against RING champion Sergio Martinez (49-2-2, 28 KOs) in an HBO Pay Per View clash at the Thomas & Mack Center in Las Vegas.

Martinez’s trainer, Pablo Sarmiento, has called Chavez Jr. “a chicken,” and Martinez has said that he has “seen fear” in Chavez Jr.’s eyes.

“He talks a lot to the television cameras,” said Sarmiento. “But he doesn’t say these things to Sergio’s face when he’s looking him in the eyes.”

And now the father has come to the defense of his son.

“Martinez has been talking a lot about Julio and how he’s going to beat him. But he has invoked the devil,” said Chavez Sr. “When you see the devil coming, you are not going to know what to do. This Saturday, he’s going to eat all of the s–t that he’s been talking.” 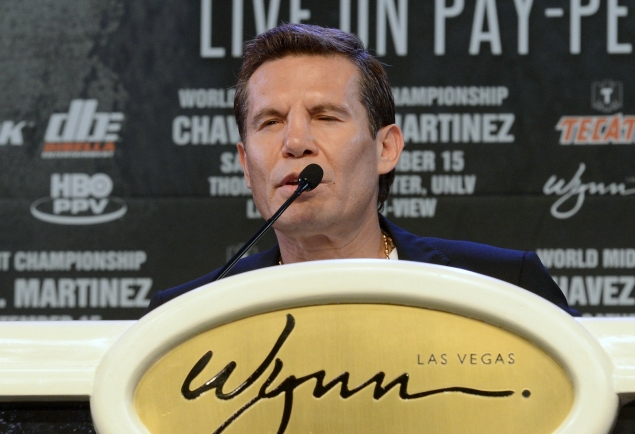 “Talk is talk. I did it in the beginning to make this fight happen because I wanted this fight. But as soon as the fight was signed I didn’t talk bad about Martinez because I didn’t dislike Martinez. Martinez is not a bad guy. He’s a nice guy and I wish him the best. But there has been a lot of trash talking,” said Roach.

MARTINEZ ON CHAVEZ: ‘HE HAS A GOOD BODY SHOT’

Of all of Chavez Jr.’s abilities, what Martinez respects most is the younger man’s work downstairs.

Martinez ranks Chavez Jr. far below fellow left-hander Paul Williams, to whom he lost a disputed majority decision before knocking him out in the second round, and former undisputed middleweight champion Kelly Pavlik, whom he beat by unanimous decision.

Martinez said Chavez Jr. rates “around the area” of top contender Matthew Macklin and previously unbeaten fighters Darren Barker and Sergei Dzinziruk, all of whom Martinez knocked out.

Pavlik and Williams were hospitalized with cuts after their bouts. Macklin wasl left bleeding profusely around his eyes and had a large welt on his forehead after being knocked out in the 11th-round.

Barker suffered a perforated eardrum during an 11th-round stoppage loss to Martinez, and Dzinziruk was floored five times during an eighth-round knockout loss. 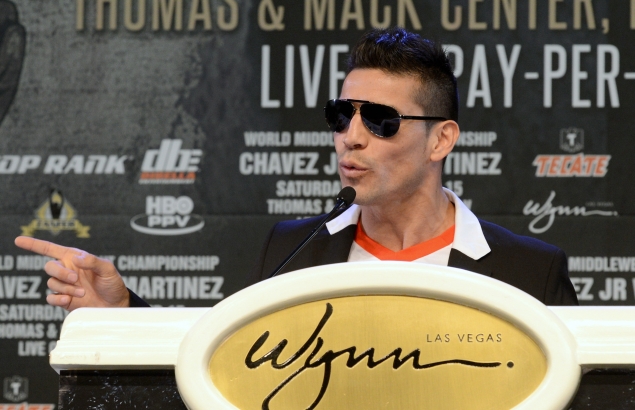 “Chavez is young. He’s strong. He has a good chin. But I am very patient. Very slowly, I will cut him up,” said Martinez. “I hope that somebody will feel sorry for him and stop the fight. Maybe Roach, the doctor, the referee or his own father. Because I will not stop punishing him until they do.”

“Sergio Martinez is an unusual guy, and he’s an unusual fighter. He has a story that is typical of a lot of fighters. But that story is not typical of Chavez Jr. Chavez Jr.’s father is one of the greatest fighters who ever lived. Junior’s father is a multi-millionaire. Junior was lifted in tuxedos over the heads of guys who carried him into the ring with a Chavez head band around his head. Cute kid too, at the time,” said DiBella.

“But he had the best. He had the best his whole life. Sergio Martinez was shoeless in the slums of Argentina, having to fight his way out of the ghetto. Having to fight his way out of abject poverty. As hard as his family worked to make a life, and to make it through, and to make a living to feed their children. That’s a different way of being brought up that results in a different mentality.”

Chavez Sr. is back in Las Vegas, where, on Sept. 12 of 1992 — 20 years ago this week — he vanquished Hector Camacho Sr. in defense of his WBC junior welterweight belt at the Thomas and Mack Center. 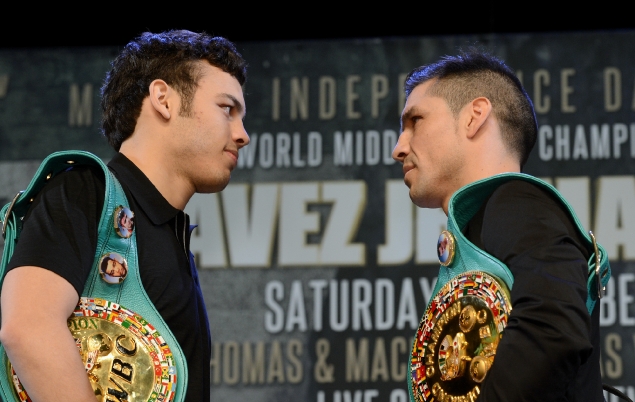 “You have a young man here in Junior who is hungry for recognition, and who is hungry to step out of his father’s shadow. He’s hungry to be the champion who deserves to have the belt in front of him. I know that he’s in shape. I saw him arrive in town. I don’t want to hear this bulls–t about him being hurt, fat and not in shape,” said DiBella.