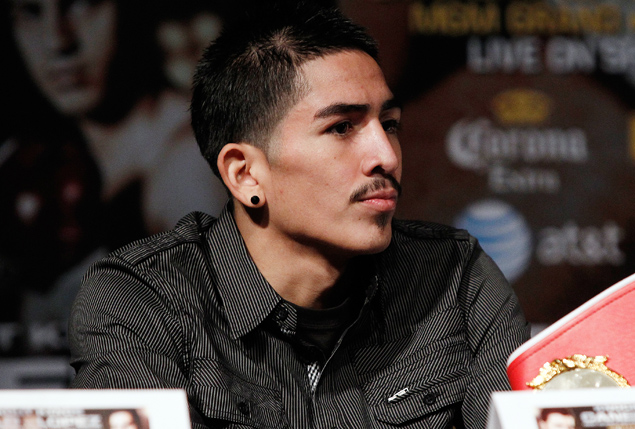 If the 24-year-old Southern Californian defends his belt against Eric Morel in the opening bout to Showtime’s quadrupleheader topped by the Saul Alvarez-Josesito Lopez fight on Saturday at MGM Grand, he’ll earn more fans and set up a move to the deep 122-pound division where he can be part of major headline fights.

Such a position was unimaginable three years ago when Santa Cruz (20-0-1, 11 knockouts) was barely a blip on the boxing radar. Despite an accomplished amateur career that included victories over the likes of Adrien Broner, Rico Ramos, Roberto Marroquin and Chris Avalos, Santa Cruz had a very quiet start to his pro career.

In fact, the young pressure fighter, nicknamed “Teremoto” (Spanish for earthquake), barely made any noise while rolling to a 10-0-1 record that included only two knockouts during the first three years in the pro game. 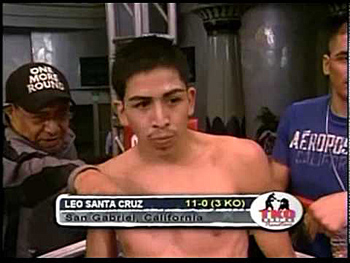 He was signed and let go by Top Rank shortly after turning pro in October of 2006. And though he was picked up by TKO Boxing in 2009, the upstart promotional company was out of business by the end of 2010, leaving Santa Cruz inactive and in career limbo.

“It was a frustrating time in my life,” said Santa Cruz, who only fought twice in 2010. “I wasn’t making any money and I was watching fighters I beat in the amateurs fight on TV.”

Santa Cruz accompanied his father and older brother to talk to Eric Gomez, chief matchmaker for Golden Boy Promotions, which was making fights for Vargas at the time.

“Leo literally fell into my lap,” recalled Gomez. “He was a blessing in disguise because I didn’t know much about him at the time.

“Leo came into my office with Armando and his dad, Jose, who I knew from the old Resurrection Gym, where he used to train. After Armando signed the contract, the father said ‘I want to talk to you about my son Leo. We can’t get a fight. Can you help us?’

“It just so happened I did have something for him, provided he was willing to take a step up in competition. We were doing a show in Mexico with Canelo Promotions (Alvarez’s company) where we were matching one of our guys with their fighters. They had a good bantamweight who needed an opponent for a Televisa show.”

The “good bantamweight” was Stephane Jamoye, of Belgium, a former European champ who had battled undefeated prospect Tomoki Kameda to a scintillating split-decision loss on the Mexican network the previous year.

Santa Cruz jumped at the opportunity and wound up stopping Jamoye, who had a 20-2 record at the time, with a brutal body attack in the sixth round of a fight that turned heads south of the border last March.

“He was a hit in Mexico,” Gomez said. “The Televisa commentators compared him to a young Carlos Zarate. They loved the way he went to the body.”

Santa Cruz was signed to Golden Boy Promotions, which matched him even tougher in his very next bout – a Telefutura-televised crossroads bout against former 115-pound beltholder Jose “Clarita” Lopez.

Lopez, a heavy handed, tough-as-nails Puerto Rican veteran, had lost his last two bouts going into the fight, which took place last June. However, he had been unbeaten in 16 bouts prior to those back-to-back losses and he had never been stopped.

“Everyone was against the fight,” Gomez said. “Boxing writers told me that Lopez was too tough and too strong for Leo. They kept seeing this young, fragile kid they’d seen fight in previous years. But he had grown and he was definitely stronger than he looked.”

“Clarita said he’d never been hit like that before, especially to the body,” Gomez said. “That’s saying something. Lopez fought (Fernando) Montiel when Montiel was in his prime.”

Santa Cruz, who had been trained by Rudy Hernandez and Abel Sanchez early in his career, believes taking on his father as head coach helped him develop his power. He also agrees with Gomez that he was a late bloomer in terms of “man strength.”

The Lopez victory let Santa Cruz and the boxing world know that he had “bloomed” and could one day win a world title.

“Nobody thought I could knock him out,” he said. “That was an important fight for me because Lopez could punch. I felt one right hand that he landed in the early rounds, but as soon as I hit to the body I knew the fight was over.”

Santa Cruz said he wanted to make a statement with his back-to-back knockouts.

“I wanted (Golden Boy Promotions) to see that they were going to get a real fighter,” he said. “I wanted them to know that if they signed me they wouldn’t want to let me go.”

Not a chance of that. The Jamoye and Lopez knockouts were part of a nine-bout string of stoppages that led to Santa Cruz’s title bout with Malinga, who he didn’t stop but dominated with his pressure and amazing volume punching.

Santa Cruz and his conditioning coach, Daniel Garcia, believe he could have done better if they had a longer camp.

“We only had six weeks of work before the Malinga fight so we only worked on his stamina,” said Garcia. “The goal was for him to the same intensity and activity in the 12th round that he had in the first round. And he did. He threw 108 punches in the first round and 121 in the 12th.”

Garcia says they had the time to add a strength program to Santa Cruz’s camp for Morel, a skilled 36-year-old veteran who represented the U.S. in the 1996 Olympics and has only lost (via decision) to excellent titleholders Abner Mares, Martin Castillo and Lorenzo Parra.

“Morel has speed, moves, experience, everything you would expect from an Olympian and a former champ,” he said. “But I’m younger and hungrier.

“I know it’s going to be a hard fight but I’m going to give it my all.”

And this time, fans will take notice.