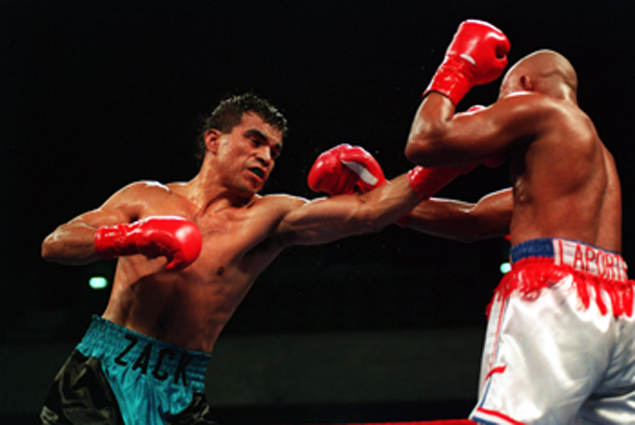 Only five-and-a-half days after his trip to Verona, N.Y. – and the International Boxing Hall of Fame – the Travelin’ Man returned to the road and, for the third time this year, Las Vegas was the final destination. Given his history of misadventures, one has to wonder if Groves was blessed with good luck or if the Travel Fates caused him to crap out. To find out, read on:

Friday, Sept. 7: Entering 2012 I had visited Las Vegas only once – in May 2008 to witness Chris Byrd’s ill-fated experiment at light heavyweight. Back then this West Virginian from a town of 130 was struck by the glitz, glamour and grandiosity of my surroundings. I suppose it was a mild case of culture shock but within 12 hours or so I began to grow accustomed to the weirdness of it all. By the time I departed a couple of days later it actually seemed somewhat normal.

With each succeeding trek westward those feelings diminished, a hypothesis that was confirmed during my journeys to “Sin City” in February and July of this year. Of course, I didn’t sample the nearly endless entertainment options – after all, I was there on business – and I don’t have any plans to do so this time. For me, the prospect of working big-time boxing matches is enough excitement for me.

From a personal standpoint, one of the best things about Vegas is that it’s the only city I visit regularly that offers direct flights to and from Pittsburgh. Therefore, I don’t have to deal with the vagaries of multi-stop itineraries such as hustling to catch connecting flights, sitting through lengthy layovers, being surprised by gate changes after settling into my mini-workspace, and so on. Mind you, these are minor inconveniences that I turn into positive results but it’s nice not to encounter them anyway.

Better yet is the late-afternoon departure time offered by Southwest, which allows me a few hours at home to tackle final details before pulling out of the driveway a little after high noon. There’s no bleary-eyed scrambling or any need for caffeine-fueled alertness. I can ease into my day at my own pace, a luxury I’ve learned to savor since I began flying regularly seven years ago.

My boarding pass read “B 46,” which under Southwest’s “open boarding” policy meant I would be the 106th person to enter the aircraft. I braced myself for the possibility of occupying a middle seat but I spotted one by the window in the 21st of 23 rows. I don’t mind sitting near the back; it’s not as if row one passengers were going to arrive in Vegas any sooner.

What I did mind was the wicked turbulence that struck as we flew over the Midwest, something I suspected would happen when I noticed storms over Illinois on one of the weather radar monitors in Pittsburgh. This was grip-the-handrails, beverage-shaking bobbing and weaving that forced us to pay total attention – and say a prayer or two. The five minutes of rockin’ and rollin’ seemed more like 20 because I had visions of tailspins dancing in my head.

I turned to my seatmate and remarked “if I didn’t know any better, one would think Joe Frazier was flying this plane.” Being old enough to get the bob-and-weave reference, he chuckled.

The pilot, who immediately told the flight attendants to stop the ongoing beverage service, subsequently apologized for the uncomfortable ride but also noted the situation was unavoidable.

The worst turbulence I ever experienced took place in July 2007 during the first of my two trips to Germany where, in the middle of the night somewhere over Ireland, the plane suddenly plunged downward and to the left, momentarily lifting me from my seat. The instantaneous nature of the moment combined with the darkness of night only heightened the terror but because it was mercifully brief it enabled us to return to normal within a relatively short time.

Once the turbulence on this flight settled I resumed reading my latest library acquisition, “The Perfect Mile” by Neal Bascomb. The book vividly chronicles the pursuit of the first sub-four minute mile by three driven but diametrically opposed personalities – the dynamic and high-spirited Kansan Wes Santee, the tireless Australian John Landy and the studious Briton Roger Bannister, who ended up being the first to smash through the barrier when he ran a 3:59.4 on May 6, 1954. Once Bannister obliterated the psychological roadblock associated with the chase, the floodgates opened. Just 46 days after Bannister shook the world Landy ran a 3:57.9, a record that stood for three years. The current world record of 3:43.13 by Morocco’s Hicham El Guerrouj was set in July 1999 and even high school runners have surpassed the heretofore unbreakable standard. Marty Liquori was the first to do so in 1967 (3:59.8) and Alan Webb’s 3:53.43 in 2001 broke Jim Ryun’s 36-year-old schoolboy record of 3:55.3.

Reading Bascomb’s excellent book prompted me to ask this question – is there a standard in boxing that would require similarly superhuman effort, a physiological and psychological barrier that, if broken, would cause others to leap over the hurdle with ho-hum regularity as with the four-minute mile today?

The short answer is no, at least when it comes to an event that would inspire worldwide attention and celebration upon its conquering. But one measure of a fighter’s extreme exertion is his punch output over the course of a round and an entire fight.

The current CompuBox record-holder for punches thrown in a 12-round fight is Antonio Margarito, who threw 1,675 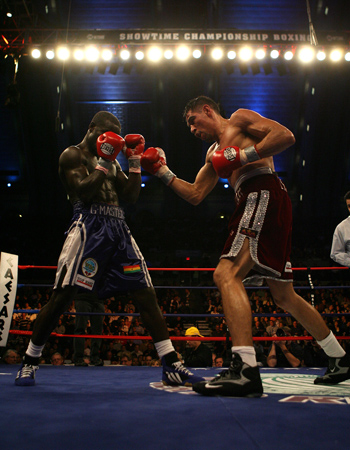 One seldom achieved benchmark is the 200-punch round. In CompuBox’s 27-year history, only four fighters have achieved it – Vince Phillips, Ray Oliveira, Zack Padilla and Hanzel Martinez. Amazingly, Phillips and Oliveira produced the top two single-round efforts in the very same round – Phillips threw 237 and Oliveira 226 in the final round of their classic that Phillips won by majority decision. Here are a few more interesting facts regarding 200-punch rounds:

The scope and rarity of the 200-punch round is astonishing when one compares it to other notable fights in boxing history. One of the most action-packed final rounds of this generation was the one Emanuel Augustus and Micky Ward produced in their July 2001 war, but as violent as that three-minute span was, only Ward’s 175 total punches (14th) and 169 power punches (7th) managed to break into the all-time single-round top 20.

During the first round of Hagler-Hearns – called by many the single greatest round this sport has ever known – neither man reached triple digits or, for that matter, even threw a combined 200 punches (82 for Hagler, 80 for Hearns). The ninth round of the first Ward-Gatti fight, one of history’s most viscerally violent rounds, saw them combine for 163 power attempts and 102 power connects. In fact, to break into the all-time top 20, a fighter must throw more than 166 in a round (Carlos Vinan vs. John Molina in round one and Margarito vs. Clottey in round nine are currently tied for 19th).

In this age when volume-punching is being emphasized more, it’s possible that more fighters will shoot for, if not achieve, the 200-punch-per-round plateau. But there are reasons why this feat is so rare and will remain so. First, very few fighters have the conditioning to pull it off. Second, the opponent must remain within punching range even as he’s being hammered. Third, that opponent must be tough enough to absorb that severe level of punishment yet remain resilient enough to fire back so the referee won’t stop the fight. Finally, the man doing the volume punching can’t be a one-punch KO artist because if he were his power would likely short-circuit his effort.

As far as breaking Margarito’s all-time CompuBox-era record, similar dynamics must be in play but they must remain so for the fight’s duration. The stars have to line up just right, much like they did the night Kobe Bryant scored 81 points against the Toronto Raptors on January 22, 2006 or when Minnesota Vikings running back Adrian Peterson ran for 296 yards in his eighth NFL game to become the single-game record holder. A delicate balance of variables must fall into place and in the unpredictable world of world-class sports the odds are inconceivably long. That’s why there’s so much wonder attached to it when single-game – or single-round – greatness happens.

My fellow passengers and I experienced one more jolt of turbulence over the Rocky Mountains – an expected event – and a harder than usual touchdown in Vegas, an unexpected event. Mercifully, the notoriously long line at the airport’s cab station was much shorter this time; instead of snaking through six 300-foot-long partitioned lanes before reaching the head of the queue, I only had to trek through two of them. The cab ride to the Hard Rock Hotel and Casino lasted about five minutes and the checking-in process was also briefer than usual.

Last week in Verona I received a fresh injection of boxing history by touring the International Boxing Hall of Fame’s archives that are currently housed in the museum’s basement. This week my surroundings were immersed in rock-and-roll history in the form of exhibits featuring one-of-a-kind artifacts, including smashed guitars and a portion of the airplane that crashed and killed Otis Redding. Hundreds of portraits depicting the industry’s icons were on display and every room had at least one picture of a music notable. For example, my 10th floor room boasted a 1980 black-and-white photo by Allan Tannenbaum of The Cure on a New York City street. The caption accompanying the picture noted “the passing NYPD officers offered a provocative comparison of the suspicion of authority and the rebellion of youth.”

On another wall near the bed hung a large limited edition photo of a very young Mick Jagger, who wore a pouty smoldering look as he glanced to his right while an old-school silver microphone hung at forehead level. The decades of greatness were yet to come and he certainly didn’t conceive of a day where he’d still be singing “Satisfaction” in his 60s, a prospect he derided at a much younger age.

Because my stay in Vegas would be less than 48 hours I decided to stay on East Coast time, so I turned out the lights shortly before midnight.

Lee Groves is a boxing writer and historian based in Friendly, W.Va. He is a full member of the BWAA, from which he has won seven writing awards, including four in the last two years. He has been an elector for the International Boxing Hall of Fame since 2001 and is also a writer, researcher and punch-counter for CompuBox, Inc. He is the author of “Tales From the Vault: A Celebration of 100 Boxing Closet Classics. To order, please visit Amazon.com or e-mail the author at [email protected] to arrange for autographed copies.