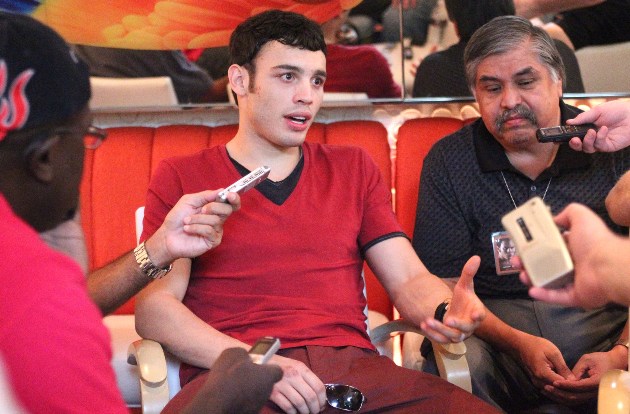 “You know, Freddie is the main trainer. He teaches me the strategy and that’s what I work on. My dad is just there for support,” said Chavez Jr. of his father, who went 89-0-1 before losing his first bout, and compiled an overall career mark of 107-6-2, with 86 knockouts.

“I listen to both of them, because they’re so great. How can I not listen to them with the experience that they both have. But Freddie is the one who trains me.”

The 26-year-old son of the Mexican legend takes a mark of 46-0-1, with 32 knockouts into Saturday night’s HBO Pay Per View-televised clash with southpaw RING champion Sergio Martinez (49-2-2, 28 KOs) at the Thomas & Mack Center in Las Vegas.

“Julio Sr. sometimes gets a little frustrated with the kid because his training programs are little erratic of course. So he yelled at him one day, but then he backed off and said, ‘Freddie, you have to yell at him, because it was like, ‘he’s my son, and I don’t want him stay mad at me for a couple of months.’ But that’s how a father and son are. He likes having his dad around. It’s a good rapport.”

A Mexican Independence Day weekend event, Chavez Jr.-Martinez sold its last remaining tickets on Tuesday at 1:58 p.m. PT, becoming the highest-attended boxing event in the history of the Thomas & Mack Center with 19,186 seats.

CHAVEZ JR. ‘DANCES TO THE BEAT OF A DIFFERENT DRUMMER’

Although Roach said Chavez has missed as many as six scheduled training sessions, often adjusting them to other locations, the fighter, himself, admits to bucking the usual in-the-gym methods in favor of early morning workouts in a rented home in Las Vegas.

“You guys are just finding out about this because it’s a big fight and because of the big lights and the cameras and all of the people coming over,” said Chavez.

“But for the last four or five years, this is what I’ve done. This is how I train, and it’s normal. I don’t expect you to understand it. It’s not the best way to do it, but you know what? It’s better to train than not to train.”

Chavez is, nevertheless, committed once the workouts begin, according to Roach.

“One thing about Julio is that once we start working out, the workouts go very good. So he does work his a– off. The times are awkward, and the locations are awkard sometimes. But he wakes up at 3 in the morning and wants to work out, so we go,” said Roach, who also trains eight-division titlewinner Manny Pacquiao.

“It does get irritating a little bit, but I do wait for world champions, and I do wait for Manny Pacquiao sometimes also. So it’s just sometimes that happens. I’ve been here four weeks, and he’s [not shown up] about six times. So we’ve done it at his house, moving the couches and doing it in the living room.”

Asked how that works when shadow boxing, Roach said, “we visualize the ropes and have an imaginary ring.”

Top Rank CEO Bob Arum simply accepts the fact that Chavez “dances to the beat of a different drummer.”

“It’s not as if he doesn’t put the work in. It’s a different kind of work. Who is to say that it’s wrong?” said Arum. “I’ve seen so many fighters get into the ring and their peak was a week before in the gym in sparring, but this kid peaks when he gets into the ring.”

Arum said Chavez also has begun to work with a sports psychologist.

“There is a guy that we brought in who is a sports psychologist, and I think that he worked with the [Pittsburgh] Steelers. I asked him today how is [Chavez?]” said Arum.

“He said, ‘he’s strong and he’s confident.’ So it works. Whatever the frick works for these guys…This kid has never felt any pressure that I can see. He was always one of these super-confident sort of kids who was happy in his own skin.” 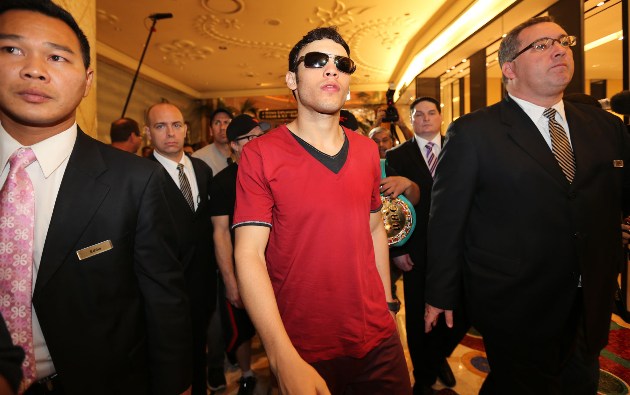 Although he captured the WBC belt by dethroning Sebastian Zbik by majority decision in June of last year, Chavez addressed the fact that he’s had to overcome discipline problems.

Chavez successfully defended his belt against Marco Antonio Rubio in February in San Antonio on HBO despite being in relatively bad shape and having to lose an astronomical amount of weight the day before the fight.

But during an episode of “2 Day Julio Cesar Chavez Jr.,” Chavez credited the addition of conditioning trainers Luis Cornejo and Vladimir Baldenebro, who, together with strength coach, Alex Ariza, have made the difference for the clash with Martinez (49-2-2, 28 KOs).

“The truth is that I had lost a lot of weight and I was dead in the ring. I couldn’t chase Rubio around. So that night, against Rubio, I was not able to do anything,” said Chavez, who was without Ariza for the first time in six fights during his preparation for his seventh-round knockout of Andy Lee in June, according to Roach.

Since Ariza began working with him, Chavez had solidified himself as a top-tier fighter with five straight victories, including decisions over New York’s tough John Duddy and previously Zbik for his first-ever crown.

“Last time, we didn’t have Alex. We just had the other two guys, and we’ve brought them all together this time. They overlap a little bit. They all will do the stretching at the beginning, and the other guys will do it in the end of the workout. But everyone is doing their jobs, and there is no fighting and no tension,” said Roach.

“They don’t speak to each other too much. We feel that Alex is good with the legs, and that’s why we brought Alex back, for the legs only. He feels that the other guys are better for him making the weight and conditioning because he used to be a body builder and he knows how to cut fat.”

Although Roach estimated that Chavez was about 170 pounds on Tuesday, Chavez claimed that he is lighter than that.

“I feel great at 160, now that I know how to take the weight off. Now that I have Luis in my corner, I know how to eat the right things,” said Chavez.

“Luis had me at 158 for the last fight a few days before the fight, so I know that I can stay at 160 as long as I do what I need to do. I worked out this morning and I was only six pounds over.”

Of Chavez, Roach said, “I’m very comfortable with where he’s at right now.”

“His confidence is great and his work ethic is down. He broke his sparring partner down the last time in four rounds and worked the body well,” said Roach.

“He knows the strategy and he knows what he needs to do to break this guy [Martinez] down. The guy is very fast and mobile, and if we take his legs away from him, that will make it that much easier. It’s not an easy task, but it’s possible.”

MARTINEZ SAYS FIGHT IS ‘PERSONAL,’ CHAVEZ JR. ‘DOES NOT RESPECT THE SPORT’ 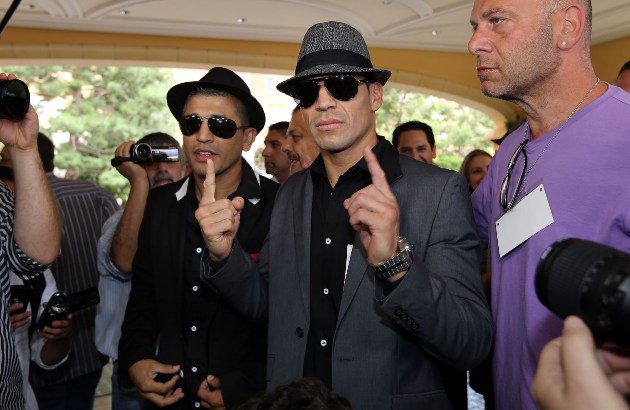 Martinez, 37, took a shot at Chavez in regard to the young titleholder’s drunk driving incident in January and what he considers to be general discipline problems.

Arrested for allegedly driving drunk, Chavez struck a plea deal in mid-June, which granted him three years of probation and ordered him to to attend 30 Alcoholics Anonymous meetings, the latter of which he already had completed.

“Always, he has a problem with his weight,” said Martinez. “Two weeks before the fight with Antonio Rubio, he commits an an infraction by driving under the influence [of alcohol.]”

Martinez will fight in Las Vegas for the first time since February of 2000, when, as a 148-pounder, he was stopped in the seventh round by Mexican Antonio Margarito at the Mandalay Bay Hotel for his first loss in 18 fights.

Martinez went 28-0-1, with 18 knockouts before losing a disputed majority decision to fellow left-hander Paul Williams in December of 2009, during which each fighter was floored in the first round.

Since falling to Williams, Martinez has won five straight bouts and four of them by stoppage, having beaten his rivals blood during each bout.

Former undisputed middleweight champion Kelly Pavlik, former two-time welterweight titleholder Williams and top contender Matthew Macklin were all left bleeding profusely around their eyes ears after having faced Martinez, with Williams being knocked out in the second round and Macklin, in the 11th.

On Saturday night, Martinez says that the youthful Chavez’s straight-ahead style will be his undoing.

“Being that he is so young and so strong, it’s going to be like a razor, and a double-edged sword,” said Martinez, who anticipates a pro-Chavez crowd for their bout. “It will be a motivation for myself.”

MARTINEZ: CHAVEZ DOES NOT DESERVE TO BE THE CHAMPION 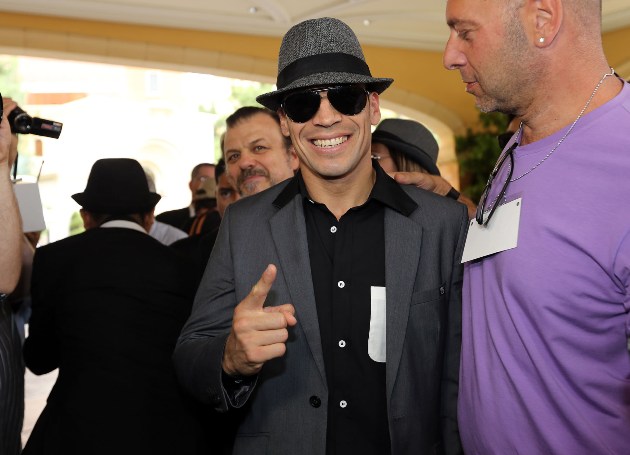 After having defeated Williams, Martinez was forced by the WBC to give up his belt for fighting Dzinziruk, and was declared “Emeritus Champion.” Zbik was elevated to the status of WBC beltholder, after which he lost to Chavez.

“I do not understand. Why do people believe that he deserves to be the champion? He does not deserve to wear the belt. That belt belongs to me, and I am going to get it back.”

Chavez, meanwhile, simply believes that he is getting under Martinez’s skin, having reminded the elder fighter of his last appearance in Las Vegas during HBO’s Face Off.

“I think that he’s talking because he’s scared. He has something inside of him that makes him think that he has to justify why he’s fighting me. He hadn’t been giving me any respect before,” said Chavez.

“But if I don’t deserve to be here, then why is he fighting me? I think that he started all of this talking because he’s very jealous of my stature in boxing and because I’m Julio Cesar Chavez’s son, but I was born that way. There was nothing that I can do about that.”

Martinez’s promoter, Lou DiBella, declared that Chavez “looks in the best shape that I’ve ever seen him.”

“All that they’re trying to do is to lull my guy into thinking that it’s going to be an easy fight. But it’s not an easy fight. He’s in the ring with a hungry young guy who has got every advantage. The crowd’s going to be 80 percent on his side on the Mexican holiday. Chavez is going to walk into that ring looking the best that you’ve ever seen. The kid is big, strong and he has a great chin, and that makes him very dangerous.”

“We’re never going to make 160 easily. Two fights ago it was bad. I always say that Chavez should go to 168, but he always disagrees with me. He says he’s okay, but I know that I’ve seen him suffer to make that weight,” said Roach.

“I believe that he would be a stronger fighter at 168. He puts the weight back on, and he goes into the ring at 180 or 185, and he beats up on the smaller guys and it has worked out well for him.”

Should he move up to super middleweight in victory over Martinez?

“I would hope so, because I believe that he will be stronger, healthier and happier at 168 and that it’s a better weight for him. We have some good opponents there.”

Among those could eventually be RING, WBA and WBC super middleweight champion Andre Ward, who is coming off this past Saturday’s HBO-televised 10th-round knockout of RING and WBC light heavyweight champ Chad Dawson.

“Andre Ward looked great the other night,” said Roach. “I don’t think that we would fight him right away, but there are guys out there, and Ward would come somewhere along the way.” 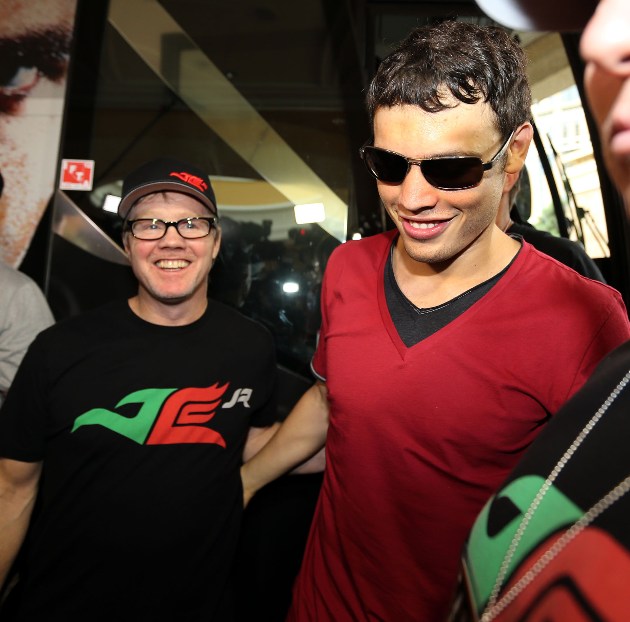