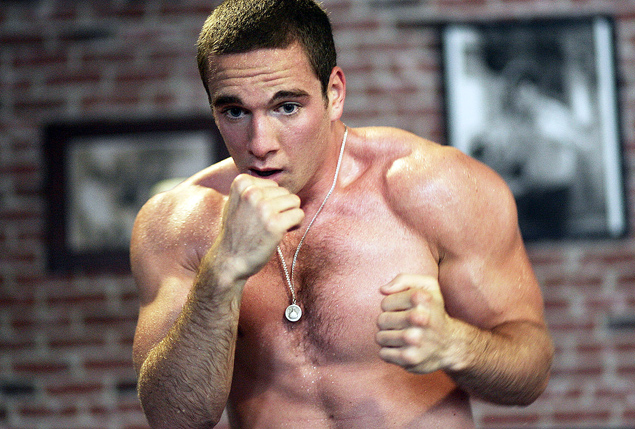 Notre Dame graduate and unbeaten Chicago-based light heavyweight prospect Mike Lee was once a wheel chair-bound freshman after having suffered a football injury during pickup game at the University of Missouri, his father, John Lee, said.

“When the accident happened with the left knee, he was playing quarterback, a position he had played all through high school along with linebacker. He got tackled, and the front of his knee was turned all the way around to the back, and he had to have surgery immediately,” said John Lee, whose son turned 25 in June.

Not only did the development relegate Mike Lee to a wheel chair for two months, but it also nearly derailed his dreams of enrolling at Notre Dame.

“Wanting to go to Notre Dame, the only way that he could have gotten in there was to transfer. So, to do that, he took a Notre Dame curriculum knowing that if he didn’t get into Notre Dame as a sophomore, that he would
have had to really start all over in a lot of classes to get a business degree,” said John Lee.

“Mike had contacted Notre Dame, and they told him the classes that they would want, but they weren’t consistent with the classes that were offered at Missouri. So he had to take a load and a half, which was much more difficult. So Mike spent those two months in a wheelchair, running around and taking classes knowing that he had to get straight A’s.”

Mike Lee came through with the grades, and spent the last three years at Notre Dame.

“Once at Notre Dame, at the age of 19, Mike saw the Notre Dame boxing team,” said John Lee. “He said, ‘my goal is to be a champion here, and my goal is to earn a degree in finance here,’ and he did both, graduating in the top of his class.”

On Saturday night, at the Thomas and Mack Center in Las Vegas, Lee will pursue his 11th victory without a loss and his sixth knockout against Paul Harness (4-3-1, 3 KOs), of Saint Joseph, Mo., who will be after his second straight knockout in as many consecutive wins.

Coming off last month’s second-round knockout of Tyler Seever, Lee will face Harness, 29, on the undercard of an HBO Pay Per View-televised main between Julio Cesar Chavez Jr. and Sergio Martinez.

The win over Seever ended a five-bout winning streak that had included four consecutive stoppage wins.

In preparation for Harness, Lee has sparred with fighters such as unbeaten super middleweight Edwin Rodriguez and middleweight Bryan Vera, among others, under the guidance of trainer Ronnie Shields.

Having become known for appearing in Subway commercials, Mike Lee also donates money to the Ara Parseghian Fund in support of children with cancer, and, also, the Robinson Center in support of underprivileged children, according to his father.

“Mike is fighting for something bigger than himself,” said John Lee.