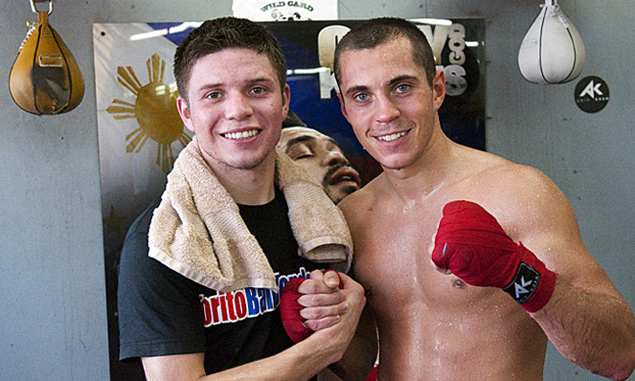 When watching Julian Ramirez spar with a more advanced boxer, one witnesses the contradiction of being raw and poised at the same time.

It doesn’t seem like a fighter can be both, but that’s how the aggressive prospect from East L.A. looked while sparring with undefeated British junior featherweight standout Scott Quigg at the Wild Card Boxing Club during the past few weeks.

Ramirez, who fights Noel Mendoza in the opening bout to Telefutura’s Solo Boxeo broadcast from Temecula, Calif., on Saturday, was not intimidated by Quigg, who is rated No. 2 in the WBA’s 122-pound rankings. 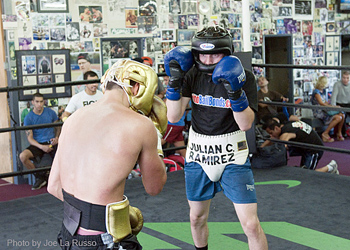 He attacked the more seasoned pro with gusto, sometimes connecting with heavy body shots but often missing with wild head shots. However, Ramirez never panicked; never lost his cool, even when Quigg outboxed him or refused to be pulled into a slugfest.

The hard-punching southpaw was relaxed (which is why he never punched himself out) but impetuous; relaxed and eager at the same time. It makes sense given Ramirez’s background.

The featherweight is only 19 with three pro bouts to his name and limited amateur experience, hence his unpolished technique. However, as the nephew of late former 130-pound champ Genaro “Chicanito” Hernandez, his adolescence was spent in Southern California’s most competitive gyms, which explains his precociousness in the ring.

“My great grandpa (Hernandez’s father) gave me my style and my fundamentals when I was a just a kid,” said Ramirez (3-0, 2 knockouts), who recently signed with Golden Boy Promotions and is managed by Joel De La Hoya. “But my uncle Victor (Hernandez’s younger brother) started training me when I was 12.

“I trained with him at the L.A. Boxing Club for three or four years before I had any amateur fights. He trains a boxing style, but mentally, he’s a mean dude. He taught me a lot of sneaky stuff.”

Ramirez has a sound foundation – good footwork and balance, a hard jab and a strong body attack. He could develop into a crafty boxer if he wanted to, but he has power and he likes to fight.

His two-fisted mentality was honed in the Maywood Boxing Club in Maywood, Calif., where he routinely sparred with aggressive pros such as Francisco “Panchito” Arce (Jorge Arce’s younger brother), former lightweight contender Jose Armando Santa Cruz and former flyweight titleholder Isidro “Chino” Garcia, when he was only 15 years old.

Although Ramirez has the utmost respect for his uncle, a borderline hall of famer who only lost to Oscar De La Hoya and Floyd Mayweather during an excellent pro career, he lists famous punchers as his ring heroes.

“I always watched tapes of Mike Tyson, Julio Cesar Chavez and Alexis Arguello growing up,” he said. “I like knockouts.”

The way Ramirez took it to Quigg, who was visiting the famous gym in Hollywood, Calif., for five weeks before returning to the UK, one would think the kid was gunning for a KO in sparring – which is exactly what the 23-year-old contender wanted.

Quigg (24-0-1, 17 KOs) worked on the finer points of the game while the confident teenager tried to press him to 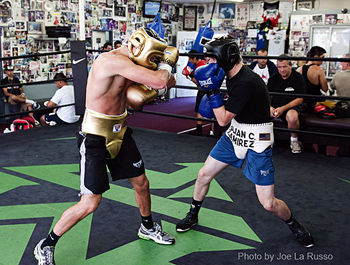 the ropes and pound hooks to his body. Quigg utilized deft upper-body movement to avoid Ramirez’s head shots and fired a sharp jab from his hip while he backed up.

Quigg wasn’t trying to get into a firefight. When he occasionally spun out of a corner and pinned Ramirez to the ropes, he tapped the younger man in return, clearly focusing more on technique than power.

However, the final 20-30 seconds of each round (they usually went five to six) were highlighted by hard exchanges in the center of the ring. Ramirez persistently stalked Quigg and threw hard in every round. Quigg blocked and pivoted well in close.

“It’s good work,” the English fighter said after one such session. “My goal is to control my shots and to be more fluid and relaxed. I’ve giving him things to think about while he’s in there.

“I can be an aggressive fighter, but I’ve come out here so I can learn not move like a stiff English fighter. I want to learn that American pro style where I’m moving my head and placing my shots with some footwork. I want to put the two styles together.”

Quigg, who is coming off a disappointing three-round technical draw with Rendall Munroe (due an accidental clash of heads) in June, says he’s targeting a November rematch with the respected former title challenger, who happens to a be a southpaw.

Quigg was so impressed with the work Ramirez gave him at Wild Card that he wants the young man to join his training camp in Britain.

“The guy Julian is fighting has been inactive, but he’s got a good record and he was considered a prospect a few years ago,” De La Hoya told RingTV.com. “He’s never been stopped, either, so I think he’s a good choice for Julian’s first six rounder.

“Even in the amateurs, Julian was a puncher. I think he stopped like 60 opponents out of 75 wins, so even though he’s always got good work in the gyms he’s not used to going rounds in real fights. I love to see my young fighters go the distance, especially early in their careers, because that’s where they learn.”

And as Quigg can tell Ramirez, a fighter is never too advanced to learn new things.