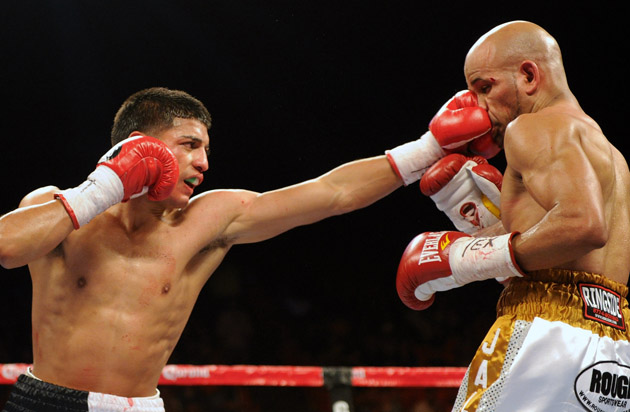 WBC junior featherweight beltholder Abner Mares will defend his title against rising WBA bantamweight titleholder Anselmo Moreno on Nov. 10 at Staples Center in Los Angeles rather than Oct. 27 at the Honda Center in Anaheim, Calif., according to Golden Boy CEO Richard Schaefer.

Schaefer said the move was made in response to an adjustment by Manny Pacquiao, whose promoter, Top Rank CEO Bob Arum, had originally reserved the MGM for a Nov. 10 event to be headlined by Pacquiao but recently switched that to Dec. 8 at the MGM Grand on HBO Pay Per View, according to Nevada State Athletic Commission executive director Keith Kizer.

“It has become apparent now that Pacquiao is going to go on Dec. 8, and that opened up Nov. 10. So I am moving the card from Oct. 27 with Abner Mares and Anselmo Moreno from Oct. 27 to Nov. 10 from the Staples Center in Los Angeles,” said Schaefer. “I think that that’s a fitting place for this showdown, and I’m really excited about it.”

A 26-year-old Mexican-born fighter from Montebello, Calif., Mares will be trying to end a 27-bout winning streak that includes 10 knockouts for Moreno, who turned 27 in June.

Mares ran his record to 24-0-1, with 13 knockouts with a unanimous decision over Eric Morel for the vacant title in April in Mares’ 122-pound debut. On the Mares-Morel undercard, Moreno (33-1, 12 KOs) scored a ninth-round knockout of David De La Mora.

The Mexican-born Angulo was released last month after an eight-month stay at the El Centro Detention Center in El Centro, Calif., following the winning of his court case on July 30 and the resolution of immigration matters.

Angulo’s boxing manager and counsel, Michael Miller, informed RingTV.com that Angulo “overstayed his U.S. visa” and was being held at the El Centro Service Processing Center, an immigration detention facility located just under 14 miles from the U.S.-Mexico border.

Angulo was last in the ring in November, when he lost by an exciting, sixth-round knockout to southpaw James Kirkland. Angulo was stopped for the first time in his career, ending his streak of five straight knockout victories since losing by unanimous decision to Kermit Cintron in May of 2009.

“To have the availability in Los Angeles is in itself great, because whenever you have a fight at Staples Center, it elevates the fight and it elevates the event. So I’m very pleased.”

Kizer said that Top Rank still has Nov. 10 reserved at the MGM Grand.

Lem Satterfield can be reached at lemuel.sat[email protected]