Trainer: Alexander to give Bailey ‘beating of his life’ 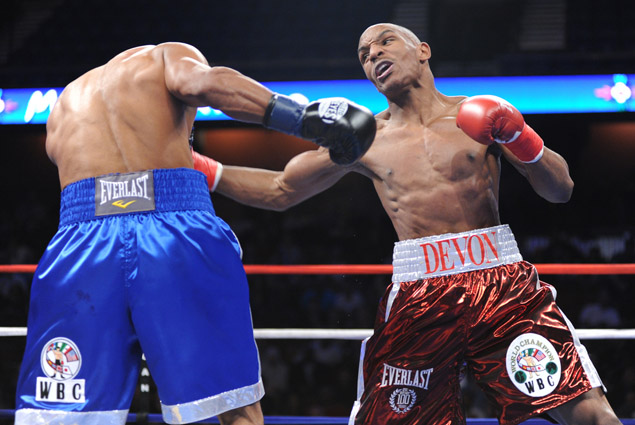 The trainer of former IBF and WBC junior welterweight titleholder Devon Alexander believes that IBF welterweight beltholder Randall Bailey is faking the injury to his back which has led to a postponement of his Sept. 8 defense against Alexander.

Plans are for Bailey to defend against Alexander on either Oct. 20 from The Barclays Center in Brooklyn, N.Y., or else on Oct. 27 from the Honda Center in Anaheim, Calif., according to Golden Boy CEO Richard Schaefer.

Bailey (43-7, 37 knockouts) is coming off a come-from-behind, 11th-round knockout of Philadelphia’s Mike Jones on the undercard of Tim Bradley vs. Manny Pacquiao in June.

In an interview with RingTV.com, Bailey claimed that the injury was the result of a collision with a larger sparring partner after he had thrown a punch on Thursday.

But Alexander’s trainer, Kevin Cunningham, is not buying it.

“In all of his interviews, he’s called Devon small, a midget, little, and yet, in your interview, he says ‘yeah, I was sparring with all of these big guys.’ So, if you think that Devon is so small, what the f–k are you sparring with big sparring partners for? That just tells me that this guy is just making excuses and that’s part of the excuse that he’s making along with this injury,” said Cunningham.

Asked if he thought Bailey was faking an injury and fabricating the story, Cunningham said, “yeah, that’s exactly what I’m saying.”

“He’s saying that it’s a back injury, but then, he tells you that they thought he broke his hip,” said Cunningham. “But the hip is a totally different area from the back. So which one is it? Is it your hip that’s f–ked up, or is it your back?”

The win over Jones was Bailey’s fourth straight victory, having last suffered defeat by 11th-round stoppage against Juan Urango in a failed bid to earn the IBF’s junior welterweight belt in August of 2009.

In his next fight, Urango was knocked out in the eighth round by fellow southpaw Alexander, who is coming off consecutive wins over hard-hitting Argentine countrymen Lucas Matthysse and Marcos Maidana by split- and unanimous decision, respectively.

In his most recent interview, Bailey, nevertheless, vowed to deliver a knockout over Alexander.

“The bottom line is that the man was not prepared. The man was on his Twitter account talking about fighting on Sept. 22, when the fight was a done deal for Sept. 8,” said Cunningham.

“We gave him everything that he wanted in this deal. He didn’t want the fight to come to St. Louis, to we took it to Las Vegas. He wanted big money, and he has the biggest pay day of his life. When he gets into the ring with Devon, Randall Bailey is going to get the worst beating of his life.”