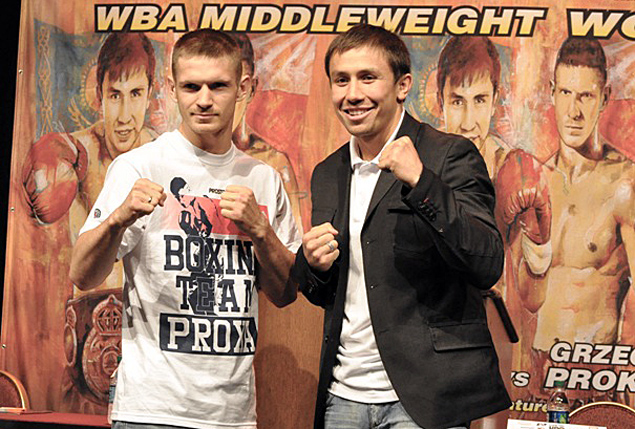 Grzegorz Proksa (right) has been overlooked by the U.S. boxing media going into his HBO-televised showdown with Gennady Golovkin. However, the Polish southpaw is very confident after recently defeating the only man to beat him.

After an upset win of Sebastian Sylvester where he pounded the world-rated German into submission, Grzegorz Proksa arrived on the middleweight scene.

But then a routine fight against lightly-regarded Kerry Hope went awry when the British journeyman pulling off the upset by majority decision. It was the first loss of Proksa’s career and the defeat took some luster off his profile. Proksa (28-1, 21 knockouts) wisely signed on for a rematch just four months later and eradicated any doubts with an eighth-round stoppage, avenging his lone professional loss. The win not only moved the 27-year-old Poland native up the rankings, but restored self-confidence. 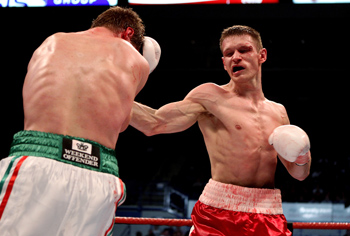 “It was most important for me to beat him because I knew I was a much better boxer,” Proksa told THE RING. “The losswas a huge upset for me. I couldn’t sleep for more than two weeks because I didn’t feel I lost the fight. I wanted a rematch right away. I was over-trained for that fight, my coach was not in the corner, but I didn’t want any excuses.”

On Saturday at the Turning Stone Resort Casino in Verona, N.Y. , Proksa steps up to the biggest fight of his life, an HBO-headline bout against undefeated Gennady Golovkin, a man known forhis devastating punching power. With both fighters making their HBO and American debuts, the fight will serve as an excellent platform for each boxer to position themselves for a shot at the winner of THE RING middleweight championship match between Sergio Martinez and Julio Cesar Chavez Jr.

Golovkin (23-0, 20 knockouts) was originally slated to face WBO beltholder Dmitry Pirog in a battle of power-punchers, but Pirog was forced to pull out with a back injury. Golovkin’s promoter K2 and HBO scrambled for a replacement and found a worthy one in Proksa, who took the fight on short notice.

“I was in the hospital when I got the call getting my hands checked out,” said Proksa, who lives in England.“I got a test to see how my body was feeling to know if my body could get through the training camp.”

Proksa’s promoter Barry Hearn of Matchroom Sport doesn’t see the fight going to the distance with both fighters possessing concussive power in both hands.

“Both have a huge knockout percentage. Both have the ability to take men out with single shots, and I think HBO is in for an exciting fight,” said Hearn. “If it goes the distance, I’ll be astonished.”

“He is strong, he beat so many good guys he must be a great boxer,” said Proksa. “That’s why no one wants to fight against him. I want to fight the big guys, but in Poland we don’t have a budget for the big fights.

“The goal is to win this fight and after this fight I will search for [the bigger fights].”

Leading up to fight week, Proksa has been little more than an afterthought. Talk has centered around Golovkin’s power and how Saturday will be his coming out party. But come fight night, Proksa believes pundits will be talking about him.

“Everyone is talking about his power, but I will surprise him with my power,” Proksa proclaimed. “A win over him would be a dream come true.”