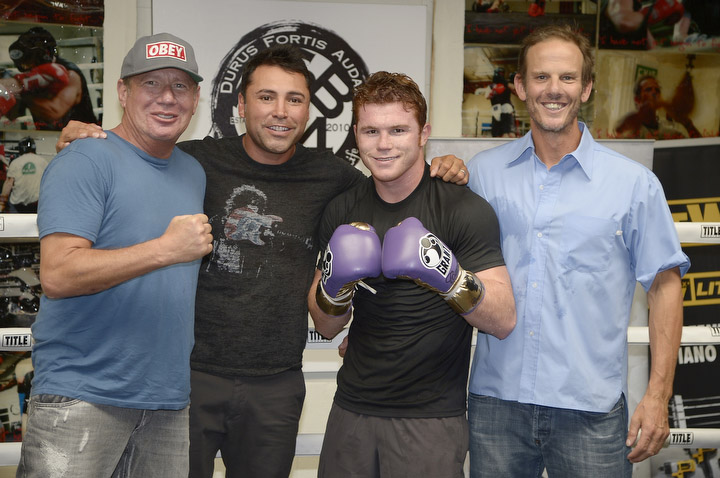 Showtime will air the first episode of All-Access: Canelo vs. Lopez on Sept. 5 at 10 p.m. ET/PT in advance of the Sept. 15 defense by unbeaten WBC junior middleweight titleholder Saul “Canelo” Alvarez against Josesito Lopez at the MGM Grand in Las Vegas.

Alvarez (40-0-1, 29 knockouts) is favored by oddsmakers at around 10-to-1 to defeat Lopez (30-4, 18 KOs), who is coming off a ninth-round upset TKO over former welterweight titleholder Victor Ortiz in June, while Alvarez was last in the ring for a unanimous decision victory over ex-titleholder Sugar Shane Mosley in May.

Lopez will be making his junior middleweight debut against Alvarez, having fought at a career-high 144 3/4 pounds against Ortiz and weighing more than 140 pounds for only the eighth time as a professional.

Lopez, nevertheless, makes his case for being the a modern day “Rocky” capable of pulling the upset against Alvarez in a Showtime-produced video that can be viewed by clicking here.

Golovkin-Proksa and Sturm-Geale are the start of an explosive month for the 160-pound division, during which WBC beltholder Julio Cesar Chavez Jr. (46-0-1, 32 KOs) defends against RING champion Sergio Martinez (49-2-2, 28 KOs) in an HBO Pay Per View-televised bout on Sept. 15 at The Thomas and Mack Center in Las Vegas.

Actor Nick Cannon, host of America’s Got Talent, will play host to the day-before weigh-in and also serve as the official ring announcer for the HBO-televised Sept. 8 clash of RING champions Chad Dawson and Andre Ward, whose WBA and WBC super middleweight crowns will be on the line at the Oracle Arena in Ward’s hometown of Oakland, Calif.

After last month’s debut show, Promoter Steve Bash and Art of Boxing Promotions are returning to the Florentine Gardens for the second installment of “Hollywood Fight Night” in Hollywood, Calif.

Among the featured fighters will be Hollywood-based welterweight Zachary “Kid Yamaka” Wohlman (4-0, 1 KO), who is trained by Freddie Roach, as well as Los Angeles welterweight Terrell “Tyger” Williams (5-0, 4 KOs).

Russian welterweight Alexander Filichkin (10-0, 3 KOs) and Armenian lightweight Vahe Sarahunyan (5-0) will also be on the card.