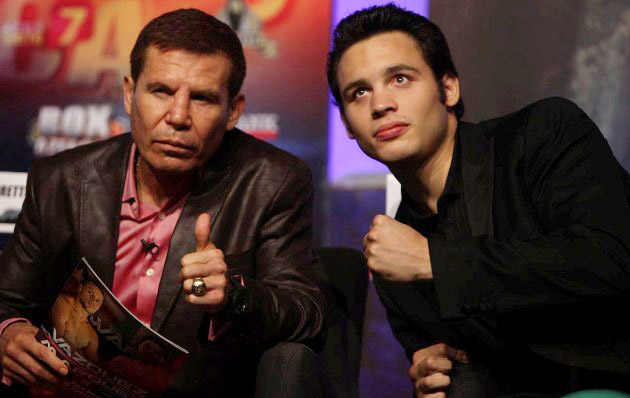 WBC middleweight beltholder Julio Cesar Chavez Jr. is preparing to defend his crown opposite RING champion Sergio Martinez in an HBO Pay Per View-televised bout that will happen on Sept. 15 at The Thomas and Mack Center in Las Vegas.

Martinez, 37, has a record of 49-2-2 that includes 28 knockouts, and is in pursuit of his sixth straight win, and his fifth consecutive knockout during that run.

The following is the second edition of Chavez’s training camp notes, taken from a press release distributed by HBO in association with fight promoters Top Rank, which handles Chavez, and Lou DiBella Entertainment, which has Martinez.

“I was not sure I wanted to be boxer at first, and started working out during late 2002 and early 2003. I lived in the United States in Riverside, Calif., and when I went back home to Culiacan, I went to my father’s gym and told my uncles I wanted to be a boxer.

“I made the same deal with my father, so when I went undefeated after those 10 fights he had no choice but to let me continue fighting, and from then on, he has supported my boxing career. Having my father with me in training is like having a master at your side. He will correct me and will give me advice, but he lets my trainers do their work.

“He just wants me to do the things right and is always talking the importance of good preparation. He is always saying that fights are won in training, and that if are your well-prepared, the fights will be easy. We have become more like friends. I know that he is my father, and I do respect him.

“But when we talk boxing now, it is as equals, and that has made our relationship much better. He has also cleaned up his act, and that makes him more enjoyable to be around and keeps me more focused on my career. He deserves a lot of credit for the victory I will claim over Mart├¡nez on September 15.”