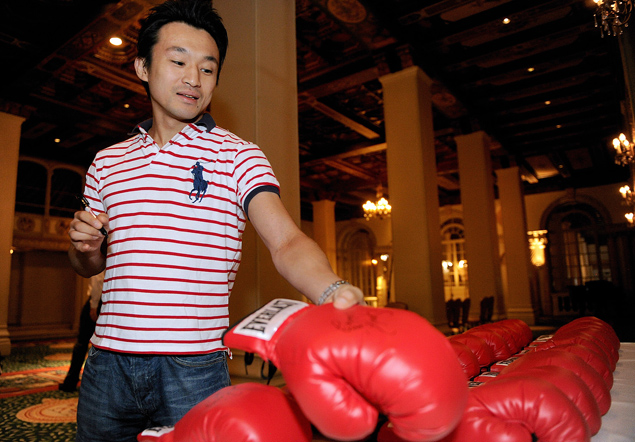 Toshiaki Nishioka is making his HBO debut against 122-pound titleholder Nonito Donaire on Oct. 13, but the American hardcore fans who tune into the Boxing After Dark broadcast from The Home Depot Center in Carson, Calif., are already familiar with the Japanese veteran.

They know that Japanese boxers are among the best on the planet in the sub-featherweight divisions and they are well aware that Nishioka is arguably the top fighter in Japan.

Nishioka (39-4-3, 24 knockouts), THE RING’s No. 1-rated junior featherweight, has earned his respected status among fans and the boxing media by winning his two most significant fights – a knockout of Jhonny Gonzalez and a unanimous decision over Rafael Marquez – outside of Japan.

It’s rare for Japanese titleholders to venture off the Pacific island to fight anyone, let alone dangerous former champs, such as Marquez and Gonzalez, who has since won the WBC featherweight title.

So the boxing world took notice when, in May of 2009, Nishioka traveled to Mexico to face Gonzalez, who dropped him in the first-round of their shootout. Nishioka got up and blasted the feared puncher in the third round, making the first defense of his WBC 122-pound title in electrifying fashion.

He defended that belt six times, including impressive points verdicts over British contender Rendall Munroe and Marquez, who he outboxed in Las Vegas last October.

RingTV.com asked the 36-year-old southpaw why he’s willing to leave Japan while other Japanese beltholders seem content to defend their titles at home at the recent kick-off press conference for the Top Rank-promoted show, which includes a can’t-miss slugfest between Brandon Rios and Mike Alvarado, at the Millennium Biltmore Hotel in Los Angeles.

“However, I’ve always kept my eye on titleholders in my weight class and their title fights that took place outside of Japan. I always wanted to fight the best fighters in my division and I was always willing to travel to their country to fight them if I had to.

“I want to be the world champion, not just a Japanese champion.”

Donaire (29-1, 18 KOs), who is No. 4 in THE RING’s pound-for-pound ratings, holds the WBO and IBF 122-pound titles. THE RING’s vacant junior featherweight championship and the WBC’s diamond belt will also be on the line.

Nishioka says he wants all of the hardware, even though historically, the IBF and WBO – the youngest of pro boxing’s four major sanctioning bodies – are not recognized in Japan .

“I want the titles Donaire holds because he has proven to be a great champion,” he said. “I want the WBC’s diamond belt because only four fighters have been given that title – Bernard Hopkins, Floyd Mayweather, Manny Pacquiao and Sergio Martinez – and they are great champions.

“And I am extremely pleased to have THE RING title on the line when I fight Donaire. I plan to take that title home.”

Nishioka can be forgiven if he seems a little world-title crazy. There was an excruciating period during his career when he appeared to be a perennial bridesmaid as far as winning a major belt.

“There were times when it seemed as though winning the title was not possible for me,” he said. “But giving up was not an option and I continued to train.

“Once I completely dedicated myself to boxing my career turned around and I finally won the belt with my fifth title shot.”

Nishioka is a skilled boxer-puncher with world-class hand speed, but his most formidable trait may be his dogged persistence.

He admits that his willingness to travel abroad makes him special among Japan’s best boxers, but he says his unwillingness to give up in the face of adversity is what will make his fight with Donaire special.

“We are both counter punchers, so the fight will probably be a chess match, but it will absolutely be an exciting chess match that fans won’t want to miss,” he said.

Nishioka, who began boxing at age 11 and turned pro in December of 1994, believes American fans who appreciate skill and technique will like the way he fights. And though he prides himself on his defense and ring savvy, Nishioka, who idolized Sugar Ray Leonard as a young boxer, says he always tries to mix an explosive offense into his game.

“When American fans watch me I want them to say to themselves, ‘This is boxing,'” he said.