Pacquiao’s advisor: No decision yet 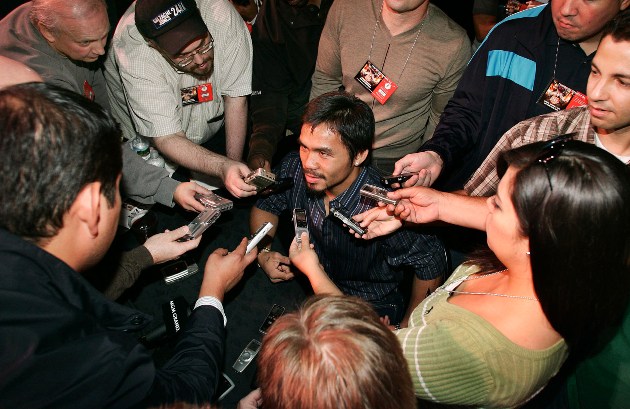 Eight-division title-winner Manny Pacquiao still has not yet chosen from among three opponents, and still is considering either Nov. 10 or Dec. 1 at the MGM Grand for a potential return date, according to his advisor, Michael Koncz.

Top Rank CEO Bob Arum had originally reserved the MGM for a Nov. 10 event to be headlined by Pacquiao (54-4-2, 38 knockouts), who has been mulling rematches with either WBO welterweight titleholder Tim Bradley, four-division title-winner Juan Manuel Marquez or three-division belt-winner Miguel Cotto.

At one point, however, Top Rank had informed Nevada State Athletic Commission executive director Keith Kizer that Pacquiao would not be a part of a Nov. 10 pay per view event at the Las Vegas-based hotel and casino, although the company still planned to hold a major fight at the venue on that date.

Koncz supported that assertion at the time, citing “conflicting schedules with boxing and Manny’s personal affairs” as reasons that Arum had “moved the date now to Dec. 1.”

But on Monday, Koncz qualified his previous statement.

“I spoke to Manny at length in regard to our upcoming fight with Manny on Sunday, and in reality, I’ve had ongoing phone conversations since Sunday with Bob,” said Koncz during an interview with RingTV.com.

Arum is expected to attend a Monday press conference at the Millennium Biltmore Hotel in Los Angeles, where he will promote an Oct. 13 show featuring IBF and WBO junior featherweight titleholder Nonito Donaire in an HBO-televised defense against Japanese veteran Toshiaki Nishioka at the Home Depot Center in Carson, Calif., with former lightweight beltholder Brandon Rios making his junior welterweight debut against Mike Alvarado on the undercard.

Cotto (37-3, 30 KOs) has been slated for a return date of Dec. 1 at Madison Square Garden, and is coming off May’s unanimous-decision loss to five-division, eight-belt winner Floyd Mayweather Jr., who added Cotto’s WBA junior middleweight belt to the WBC welterweight crown he already owned.

If Cotto does stick to his plan to return on Dec. 1, it is unlikely that Pacquiao would attempt to compete with him, being that Cotto represents the sport’s third highest pay per view draw behind Mayweather and Pacquiao.

Bradley (29-0, 12 KOs) is also in contention for another shot at Pacquiao after winning by controversial split-decision in June to end Pacquiao’s 15-bout winning streak that included eight stoppages.

There is also Marquez (54-6-1, 39 KOs), who has lost by disputed majority decision in November to Pacquiao as well as by a draw and a split-decision loss previously.

Marquez rebounded from the loss to Pacquiao with April’s unanimous decision over Sergei Fedchenko for the WBO’s interim junior welterweight belt (which has since been “upgraded” by the organization to full title status).