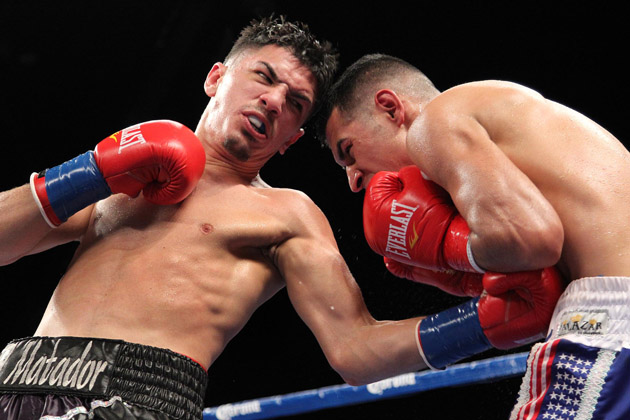 Undefeated bantamweight prospect Randy Caballero gave his hometown fans a reason to cheer by outpointing Manuel Roman in the main event of a ShoBox: The New Generation card from the Fantasy Springs Casino in Indio, Calif.

Caballero (16-0, 8 knockouts), from nearby Coachella, Calif., dropped Roman with a right-hook combination in the second round en route to controlling the 10-round bout and winning by scores of 97-92 and 96-93 (twice).

The 21-year-old boxer puncher landed sharp jabs and accurate right hands from long range throughout the bout but he was often pulled into clinches when he got close to Roman (15-2-3, 6 KOs).

Roman, a solid 24-year-old opponent from Tijuana, was game and even closed the final two rounds well but he lacked the speed, power and accuracy to turn the bout in his favor at any point.

In the co-featured bout of the Showtime broadcast, lightweight prospect Michael Perez got up from a final-round knockdown to score a split decision over Fidel Maldonado Jr., who rallied hard in the late rounds of the entertaining 10-rounder.

Perez (17-1, 10 KOs), who out-boxed and out-landed Maldonado, won by scores of 97-92 and a more realistic 95-94. Maldonado (13-2, 11 KOs), who won by a 95-94 tally on the third scorecard, was outclassed and out of gas by the end of the fourth round. However, the 21-year-old Albuquerque native surged hard in rounds seven, eight and nine and finally caught Perez in the final round.

The raw southpaw puncher landed a left to the body that put Perez on the ropes where he landed a three-punch combination to send the Newark, N.J., resident to the canvas with 14 seconds left in the round.

Maldonado wasn’t able to finish Perez but his game effort was enough to rebound from his first pro loss – a second-round TKO to Fernando Carcamo in his last bout, in April – in the eyes of most fans, and he proved his mettle by going on the attack in the final rounds of a bout he was losing, despite being clearly fatigued.

With the hard-fought victory, Perez won his second bout in a row since suffering his first loss, a six-round retirement against fellow prospect Omar Figueroa in the same venue in January.