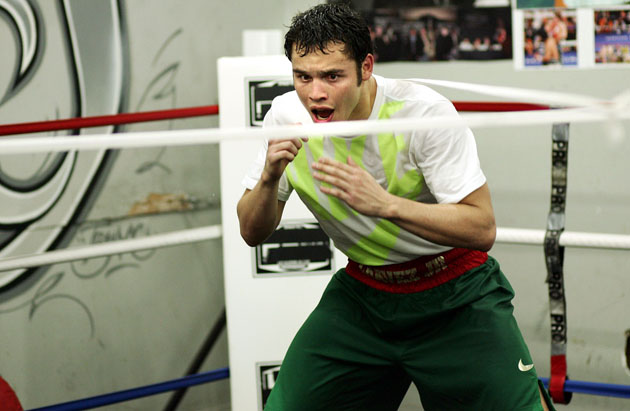 On Sept. 15, WBC middleweight titleholder Julio Cesar Chavez Jr. will put his crown on the line opposite RING champion Sergio Martinez in a bout that will take place on HBO Pay Per View from the Thomas and Mack Center in Las Vegas.

The documentary will cover a 48-hour span in the life of Chavez Jr., the 26-year-old son of the former titleholder by the same name.

Chavez Jr. is coming off a seventh-round stoppage victory over challenger Andy Lee (28-1, 20 KOs) in June, while Martinez, 37, was last in the ring for an 11th-round knockout victory over Matthew Macklin (28-4, 19 KOs) in March.

The following are Chavez’s training camp notes taken from a press release distributed by HBO in association of fight promoters Top Rank, which handles Chavez, and Lou DiBella Entertainment, which has Martinez.

In it, Chavez describes his worst moment in the ring being a split-decision victory over Matt Vanda in July of 2008, as well as his best, which was capturing his current belt by dethroning Sebastian Zbik by majority decision in June of last year.

Wednesday, August 22: Chavez Jr. – Discuss your best and worst memory as a fighter, and which wins — amateur or professional — have been the most satisfying or memorable?

“Not many people believed that I could do it, and that inspired me. The select few who did believe in me encouraged me and sacrificed for me. And to win the title only a few blocks from the old Olympic, where my father won his first world title, well, that made it even more special for me.

“My father and I will always be linked together because we won our first world championship belts in the same city. My worst memory was in July, 2008, in Hermosillo, Sonora, Mexico. I had a very difficult time in the ring. It was very hot all week, and I started getting sick the day before the weigh-in and never fully recuperated after the weigh-in.

“I had a fever the night before the fight. But I went through with the fight, and the last two rounds were the most difficult time I had in the ring. I could barely walk, and was just standing up because of my pride and my heart. I threw up in the ring after the fight and had a fever.”

“My most memorable victory was against Zbik and winning the middleweight championship of the world. It was a very difficult fight early, but I was able to come back in the second half of the fight and win it. It is a feeling that will stay with me forever. To hear the ring announcer say, ‘The winner and new…’

“That is something I will never forget. That is something I never want to forget. Of course, I now like hearing the ring announcer say, ‘The winner, and still…,’ and that’s exactly what he will say in the ring on September 15 after my fight with Sergio Martinez ends.”