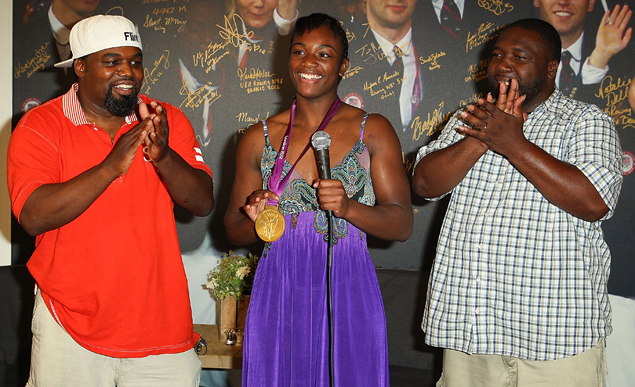 There was a time when Claressa Shields felt she had no voice and no friends; that no one listened to her or cared about her. She believed her future was nebulous at best.

The lone U.S. Olympic gold medalist in boxing can’t go anywhere in her hometown of Flint, Michigan without a group of people pulling her aside and asking for an autograph or a picture. The 17-year-old middleweight had roughly 500 Twitter followers before she left for the London Games. She returned to the U.S. with more than 10 times that amount.

Top Rank president Bob Arum has called the Northwestern High School senior. Floyd Mayweather’s people have tried to reach her. Brian Young and Prize Fight Promotions have invited her and her coach, Jason Crutchfield, to a fight in Memphis, Tennessee.

For the first time in her life, Shields is the center of attention.

It’s a welcome change from her childhood, a difficult period in which she was a constant target of derision.

Kids called her ugly. They made fun of the clothes she wore and teased her about her hair. Those experiences filled Shields with rage, and she seldom avoided a street fight – against boys or girls – because of it.

“I was always mad,” recalled Shields. “I was a troubled kid. I was bullied a lot when I was younger. I used to get called ugly because of my hair, my clothes; everything. I was lost, and I didn’t think there was anyone out there who could help me.”

Things have definitely changed. Shields is in the process of copyrighting her name. She’s already hired an agent, and she’s thinking about a bright future that a few years ago didn’t seem possible.

She is enjoying her extended victory lap, as she should. She made history in London. However, amid her newfound fame and endorsement offers the soon-to-be high school senior has some big decisions to make. 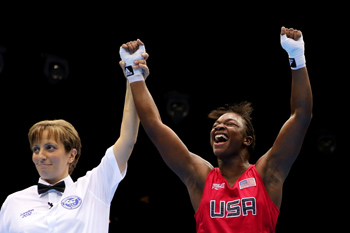 The country wants to see more of the dynamic teen who hammered her way through three opponents to become the first American to win an Olympic boxing gold medal since super middleweight champ Andre Ward won gold in the 2004 Athens Games, and they don’t want to wait four years to see her.

Boxing fans and insiders want to know if Shields will go pro.

She doesn’t mind the pressure – too much. However, just like facing an aggressive opponent in the ring, Shields won’t let it get to her. She’ll make up her mind about what to do with her career on her own time.

“This attention has been okay, but it’s kind of tiring, I don’t want to turn anyone down who asks for a picture or an autograph,” Shields said, between laughs. “There are promoters asking me if I want to turn pro; Bob Arum asked me and a few others have. Floyd Mayweather kind of did. I want to take my time and figure some things out.

“It sounds good thinking about 2016 and going for another gold medal. I’m getting endorsements and everything. We’re weighing things out. I’m being patient. The way I see it, I have a lot of time. I’m only 17. There have been a lot of different people coming at me, and we’re not just going to sign with someone anytime soon. We’ll see where it goes.”

Crutchfield admits his mind changes every day. It’s an internal battle he, too, struggles with.

“Things have taken off for her; it’s been a madhouse since we’ve got home,” said Crutchfield, who started training Shields at the Berston Fieldhouse in Flint when she was 11. “I’m leaning toward her staying amateur, because some days, I think she’s too young. But there are other days I think about going the other way. Bob Arum has reached us, Brian Young and Prize Fight, and Mayweather’s people have reached out to us.

“There are people out to get her and everyone does not have her best interest in mind. We’re trying to protect her from that. We’re going to make a couple calls and we have a lawyer looking over everything. She has an agent now and we’re chopping at it. We’ll test the market and we’ll see where things are. She’s getting local commercial offers and things, but the biggest thing is Claressa loves boxing. She’s been down at the gym almost every day since she came back home from the Olympics. None of this has gotten a hold of her. They want her to introduce Vice President Joe Biden to Michigan when he visits the state. She thought that was real funny.”

Shields is not using boxing as a vehicle to try and segue into other areas as Laila Ali did successfully in the previous decade.

There are no acting or spokesperson aspirations. Shields just wants to box.

Crutchfield said she will be in serious training again, preparing for the national PAL tournament in a few months.

If you had to pin him down right now, he says their decision would be to maintain her amateur status with the aim directed toward the 2016 Olympics in Rio de Janeiro, Brazil.

However, his biggest fear is that Shields is already beyond the amateur level and may get bored long before the next summer Olympiad.

Shields’ rise and her timing could not have been more impeccable for London. She lost in the 2011 amateur world championships to England’s Savannah Marshall, who was a quarterfinal round Olympic upset victim to Kazakhstan’s Marina Volnova, who Shields dominated in the semifinals, 29-15.

“I really love boxing, and it’s led to all of this,” Shields said. “I spoke to [2004 Olympic bronze medalist and fellow Flint native] Andre Dirrell about all of this, and he told me this may go on for another year and that I have to get used to this.

“But it’s 50-50 I’ll stay amateur or turn pro. Maybe a year from now I may make a move. But I want to go to college, and plan on playing basketball and running track for my high school this year. I want to take some time off and enjoy myself. I’m 17.”

And sitting on top of the boxing world with a radiant, beaming smile.