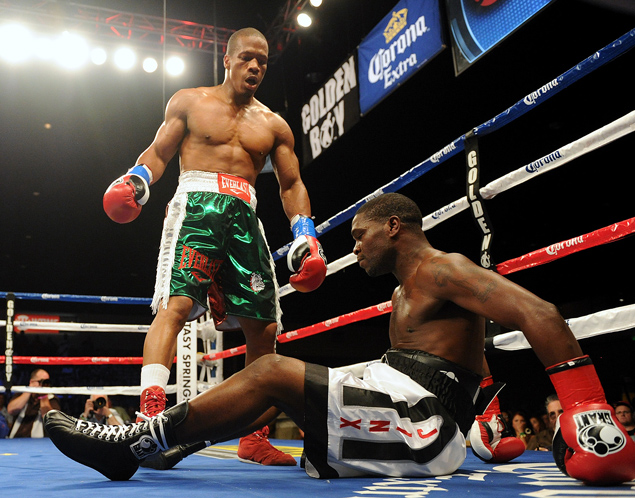 IBF junior middleweight beltholder Cornelius Bundrage and his manager, Manny Steward, mutually acknowledge a report that they are parting ways, although each gives a different reason for their separation.

Coming off June’s Showtime-televised seventh-round stoppage of Cory Spinks, whom he originally dethroned by fifth-round stoppage in August of 2010, Bundrage (32-4, 19 KOs) claims that his contracts with both Steward and former promoter, Don King, have expired.

Steward, however, says that it was he who ended the nearly three-year long relationship with Bundrage, citing the fighter’s unprofessional behavior after his effort against Spinks failed to earn him a coveted shot at WBC counterpart Saul “Canelo” Alvarez (40-0-1, 29 KOs).

In addition, Steward accused Bundrage of showing no gratitude for either him or Golden Boy Promotions, the latter of which won the purse bid to promote Bundrage-Spinks, positioning the Detroit-based 39-year-old to be considered for Alvarez.

Alvarez will instead take a Sept. 15 bout against rising former junior welterweight and welterweight fighter, Josesito Lopez (30-4, 18 KOs), who is coming off an upset, ninth-round TKO over former welterweight titleholder Victor Ortiz (29-4-2, 22 KOs) in June during which Lopez broke Ortiz’s right jaw.

“Cornelius is pi__ed at Golden Boy and with me that I didn’t get him that Alvarez fight. But I said, ‘How can I do anything with a f___ing Alvarez as bad as you looked?’ He said, ‘I deserve it. I’m the one who is a better fighter. Look at all of the people who are talking about me on the internet.’ But I said, ‘K-9, do you realize how bad your fight was?'” said Steward of Bundrage, who dropped Spinks a combined four times.

“He said, ‘What do you mean bad?’ Then he said, ‘I don’t appreciate you saying on television that I was losing.’ But I said, ‘Listen, K-9, the official judges had you losing.’ But he insisted, ‘I was winning that fight, and you and Golden Boy, you all didn’t give me that fight. They’re trying to protect that boy, Alvarez, from me.’ But you know, when you sit and you listen to this from a guy like that, you realize that you’re talking to a person who is not in contact with reality.”

Steward said that Bundrage had orally committed himself to fight for Golden Boy prior to facing Spinks, but then, backed off of that agreement after winning the bout.

“It was about him not being a man and not honoring his obligations to Golden Boy after they went out of his way to put up a bid to get his fight and to put him in the main event. We were supposed to sign a promotional contract, and then, after the fight, he said that he wasn’t going to do it,” said Steward.

“So he just used us. Because of that, I just said that I can’t be dealing with anyone who does stuff like that. I was totally disappointed and embarassed by the fact that he wasn’t being a man, and I decided not to be involved with him any longer in this boxing business or in his personal life.”

In the meantime, Main Events won last month’s IBF purse bid and the right to promote an eliminator bout between Philadelphia’s Gabriel Rosado (20-5, 12 KOs) and Miami’s Charles Whittaker (38-12-2, 23 KOs), the winner of which would be in line to challenge Bundrage.

Rosado, 26, has won six straight fights, four of them by knockout, and Whittaker, 14 consecutive bouts, eight of them by stoppage.

Although he is now a free agent who claims to have been contacted by other promoters and managers, Bundrage would neither confirm nor deny having been approached by The Money Team (TMT Promotions), the newly-formed promotional firm of recording artist 50 Cent and fighter Floyd Mayweather Jr.

“I just don’t want to make it seem like there are any hard feelings between myself and Emanuel Steward, because I really do appreciate everything that Emanuel Steward did for me. I’ve definitely got love for the Kronk Gym and the Kronk fighters,” said Bundrage, referring to Steward’s famed training facility.

“But at 39 years old, it’s time for me to make the best decision for me and my family. Emanuel, we didn’t sit down and talk about no signing bonus or nothing. It’s just time to move on. So I’m putting it out there that I need a new manager, a new promoter, and that I need to be with somebody that’s going to help me to get the big fights.”