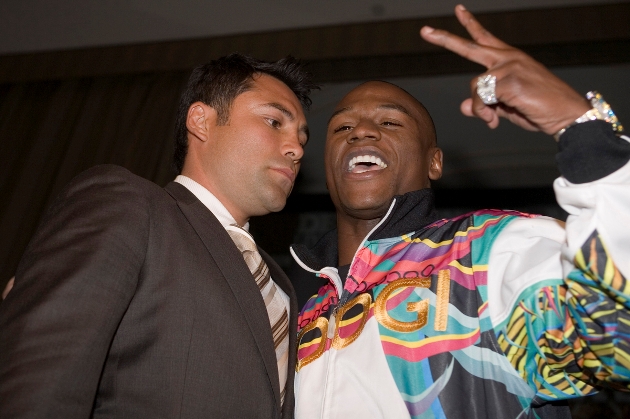 Muhammad Ali was ranked No. 1, and Evander Holyfield, No. 10.

Rated at No. 4, behind Sugar Ray Leonard, was Pernell Whitaker, whom Oscar De La Hoya defeated.

However, De La Hoya did not make the list of THE RING’s top boxers with combined Olympic and pro success despite winning an Olympic gold medal at the 1992 Games in Barcelona, Spain, garnering 10 major pro world title belts, defeating 17 champions over six weight classes, and becoming President of Golden Boy Promotions, which owns THE RING magazine and its official website RingTV.com, which posted the article penned by Lee Groves.

“Man, come on. How can you not even put me in the top five? What is that? They can’t even put the magazine owner in the top five, let alone the top 10?” said De La Hoya, 39, bursting into laughter while expressing mock disappointment.

“Who did that list? I mean, it does say Olympic and professional success combined, doesn’t it? Who has been more successful than me? Name one? And I’m not even done yet, so come on now.”

A Mexican-American from East Los Angeles, De La Hoya turned professional as “The Golden Boy” under promoter Bob Arum with a first-round knockout of Lamar Williams in November of 1992, and retired following an eighth-round stoppage loss to Manny Pacquiao in Dec. 2008 with a mark of 39-6 with 30 knockouts.

“Look, I’m not seriously upset, so don’t make it seem like I’m serious. It’s just fun and games to me. It’s fine. It’s all good,” said De La Hoya, who celebrated the 20th anniversary of his Olympic moment on Aug. 8.

“I really don’t mind, because I don’t need my head to be blown up any more than it already is,” said De La Hoya. “Besides, it just goes to show you that RING Magazine is not biased, you know what I’m saying?”