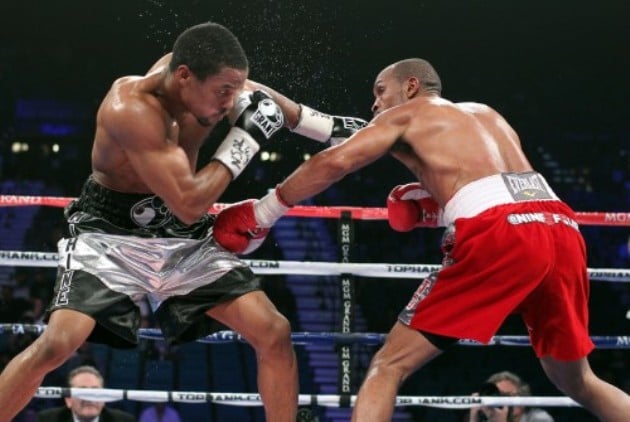 Jones has not returned phone calls from RingTV.com.

“The last I had heard, Mike was out in Las Vegas training with Floyd Mayweather Sr.,” said Peltz. “He hasn’t returned any of my texts or e-mails, so I can’t make a fight for him until I hear from him.”

Click here for videos of Jones working with Mayweather Sr.

By defeating Lujan, Jones earned the No. 1 spot in the IBF’s ratings and a berth against IBF No. 2-rated Bailey for the belt that was vacated by Andre Berto. Jones had been a potential rival for the winner of Pacquiao-Bradley, according to Top Rank CEOI Bob Arum.

“Mike was out there training with Roger for about a week or two. He’s not there as of this past week, but he was training with him,” said Peltz.

“As of last week,” said Peltz, Jackson and Jones “had not spoken since the night of the fight. I have no idea what’s going on.”

Asked if he thought Jones was considering Floyd Mayweather Sr. as a replacement for Jackson, Peltz said, “I think he was.”

During a Youtube interview with Chris Robinson, Jones said he was “down here learning from Mr. Floyd Mayweather Sr., and I’m learning a lot.”

“I’m just hungry to come back and to come back stronger. I want to learn more and to be a better fighter,” said Jones. “They say that if it ain’t broken, don’t fix it. But it got broken, so I’m trying to fix something.”

Jackson acknowledged that he has not spoken to Jones.

“I haven’t heard from Mike. I’ve been his trainer since the beginning of his career. So to tell you the truth, I’m kind of disappointed in Mike,” said Jackson.

“But it is what it is. He’s probably just going for a name in the senior Mayweather, but I’m just going to just move on. I have other people in my stable.”