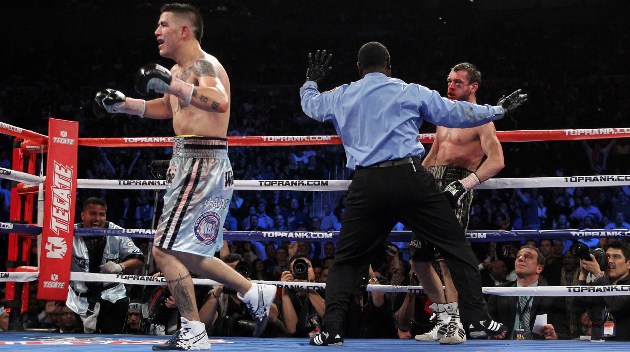 Former WBA lightweight titleholder Brandon Rios said that he believes that his junior welterweight debut against Denver-based 140-pounder “Mile High” Mike Alvarado will be “a very violent, very bloody fight,” and called the contest “a can’t-miss.”

Rios told RingTV.com that he longs to be involved in a fight that invokes memories of Arturo Gatti’s trilogy with Micky Ward and the Diego Luis Castillo-Jose Luis Castillo 2005 Fight of The Year. 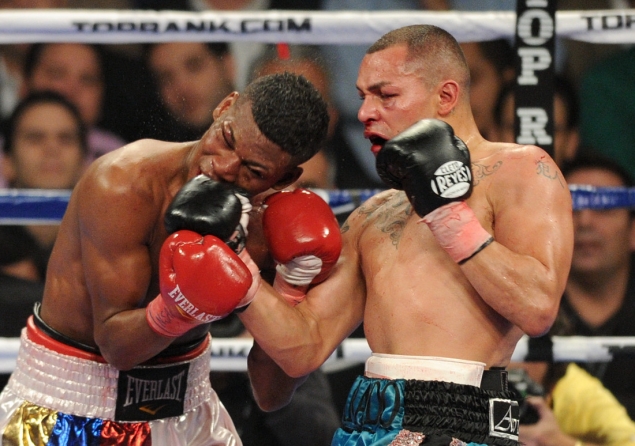 For his part, Alvarado (33-0, 23 knockouts) told RingTV.com that he believes as the bigger, stronger fighter, he will be the first man to score a knockout against Rios (30-0-1, 22 KOs), whom he has signed to face in an HBO-televised clash on the undercard of a main event matching Nonito Donaire (29-1, 18 KOs) against Japan’s Toshiaki Nishioka (39-4-3, 24 KOs), THE RING’s No. 3 and No. 1 junior featherweights, respectively, in what will be a 122-pound championship bout.

“I don’t think that Brandon will be able to counter my power and my boxing skills together. So I think that within six or seven rounds, I should have Brandon out of that ring. I think that the fight’s going to be stopped,” said Alvarado

“Brandon’s tough and he can take a shot, but we’ll see how tough he is and what sort of a shot he can take. I don’t think that he has been in there with anybody as tough as I am, so we’ll see how he can handle it.”

“That’s great that he thinks that he’s going to stop me within seven rounds. It’s great that he thinks I’m easy. I’m glad that he has that in his mind that he’s going to stop me by the seventh round. This is not something that I’ve never heard before. A lot of people have told me that. To me, that’s good. I’m glad that he feels that way,” said Rios, adding that his weight is around 152 pounds.

“We’ll see on Oct. 13. We’re going to see what’s up with that. Is he bigger and stronger? I’ve sparred bigger, stronger guys before. That’s nothing I can’t handle. I know that at 140, I’m going to be at 100 percent and feeling great and that I’ll be able to fight comfortably. Like I said, I’ll be 100 percent ready and I just hope that Alvarado is ready for a good fight.”

Alvarado and Rios are known for their fierce, blood-and-guts approach to boxing, with Rios having won his past two bouts by 11th-round knockout of British contender Johnny Murray in December and controversial split- 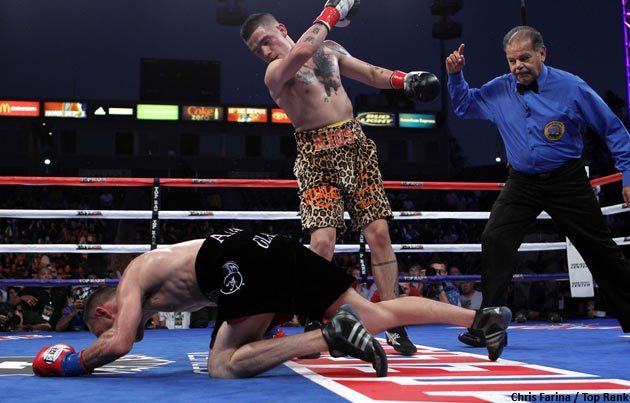 decision over Richard Abril in April.

“The Abril fight was a fluke. I didn’t feel the way that I should have coming into a fight because of the fact that I was killing myself to make 135. This is a different journey now that I’m at 140, and I can’t wait for everybody to see that.”

On the Rios-Abril undercard, Alvarado overcame rugged Mauricio Herrera (18-2, 7 KOs) for a 10-round unanimous decision after having survived for a come-from-behind, 10th-round stoppage of Breidis Prescott on the November undercard the third fight between Manny Pacquiao and Juan Manuel Marquez.

Rios had won 11 consecutive bouts, 10 of them by stoppage, heading into his fight with Murray (31-2, 18 KOs), which happened on the undercard of Miguel Cotto vs. Antonio Margarito in an HBO televised rematch at New York’s Madison Square Garden.

Murray had suffered his previous loss in July of last year, an eighth-round knockout loss to Kevin Mitchell (33-1, 24 KOs) during which he was floored in the final round. Murray had won six of his previous seven victories by knockout before falling to Mitchell. 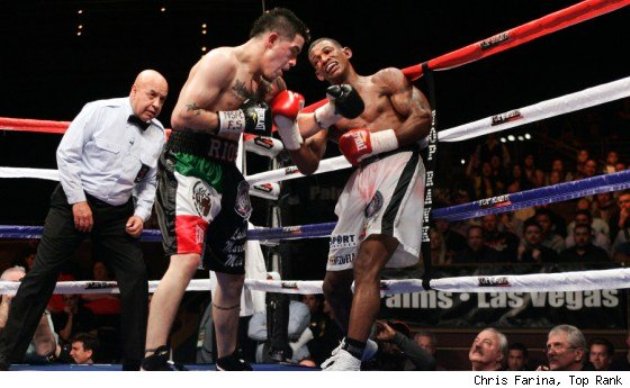 Prior to facing Murray, Rios had scored a third-round knockout of Urbano Antillon, the first defense of his belt, in July of last year. Before that, Rios came up with a 10th-round stoppage to take the be title from Miguel Acosta in February of last year.

Rios dropped Acosta during the sixth, eighth and last rounds on the way to ending a 19-fight winning streak that had included 12 stoppages.

The lone blemish on the record of Rios is a 10-round draw against Manuel Perez in October of 2008. After that, Rios reeled off six consecutive knockouts before a seventh-round disqualification victory over previously unbeaten Anthony Peterson (31-1, 20 KOs) in a WBA eliminator bout in September of 2010.