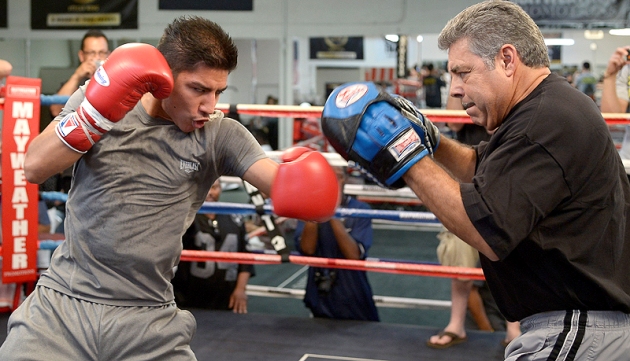 Undefeated welterweight prospect Jessie Vargas has confirmed a report that he will debut with promoter Top Rank against once-beaten, Mexican-born Aaron Martinez, of Los Angeles, on Sept. 13 from The Hard Rock Hotel and Casino in his hometown of Las Vegas on ESPN2.

“Sept. 13, that’s correct. They threw a couple of names around, and we settled on Aaron Martinez,” said Vargas. “I don’t know much about him, except that he’s 18-1.”

The matchup between Vargas (19-0, 9 knockouts) and Martinez (18-1-1, 4 KOs) will happen during the week leading up to an HBO Pay Per View-televised clash between WBC middleweight beltholder Julio Cesar Chavez Jr. and RING champion Sergio Martinez on Sept. 15 from The Thomas and Mack Center in Las Vegas.

Vargas is coming off a one-sided, unanimous decision over veteran Steven Forbes that was contested on the undercard of Floyd Mayweather Jr.’s unanimous-decision victory over Miguel Cotto on May 5 — five days prior to Vargas’ 23rd birthday.

Vargas then signed with manager Cameron Dunkin the next month in Las Vegas, where he was on hand to another of Dunkin’s fighters, Tim Bradley, dethrone Manny Pacquiao as WBO welterweight titleholder by split-decision on June 9.

On June 21, Vargas signed with Top Rank’s CEO Bob Arum, who promotes Pacquiao — this, after having been promoted by the company named for Mayweather, whose bout with Cotto and the entire event were promoted by Golden Boy Promotions.

Vargas burst onto the scene in April of 2011, when he scored a first-round stoppage over former world titleholder Vivian Harris with a debilitating body attack. No one — not hard-hitting Lucas Matthysse, former beltholder Junior Witter or even Ortiz — had stopped Harris so swiftly.

Entering a clash with Lopez in September, Vargas was coming off a second-round stoppage over Walter Estrada in July of last year that represented his second straight knockout and his sixth stoppage win over his previous eight fights.

Vargas wound up scoring a disputed split-decision over Lopez on the undercard of Mayweather’s HBO Pay Per View televised fourth-round stoppage that dethroned Ortiz as WBC welterweight titleholder.

Against Lopez, Vargas was in his first bout under Robert Alcazar, who had replaced career-long trainer Roger Mayweather, the uncle and trainer of Floyd Mayweather.

A former trainer for Oscar De La Hoya, Alcazar still is with Vargas, although other cornermen, such as ex-beltholder Cornelius Boza-Edwards and hand-wrapping, cut-man guru Rafael Garcia are not. Garcia also works Floyd Mayweather’s corner. 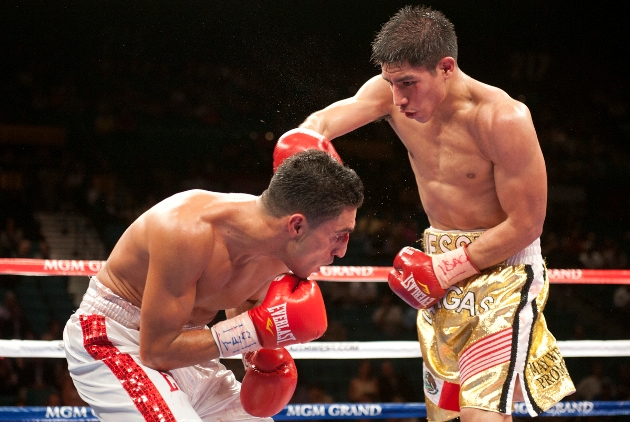 “The team that I had before, they were part of Team Mayweather, and they were great people such as Boza-Edwards and Rafael Garcia. They couldn’t work with me now that I’m with Top Rank. As I said, they’re great people, but now they won’t be in my corner come Sept. 13,” said Vargas, whose father, Jose, also works his corner.

Against Lopez, Vargas was appearing on a Mayweather undercard for the third time, having also done so when Mayweather vanquished Juan Manuel Marquez and Shane Mosley by unanimous decision in September of 2009 and May of last year respectively.

A winner of 10 straight fights, Martinez has not lost since falling by Abdon Lozano in November of 2008.

“This is just going to be another fight. I think that we, as fighters, you concentrate on the opponent that’s going to be in front of us,” said Vargas. “From what I see now, it’s going to be Aaron Martinez, and I’m looking forward to the fact that I am definitely going to be 20-0 after this one.”