No bout in the 108-year history of Olympic boxing ever had the seismic impact of Park vs. Jones, and probably no bout ever will. The 3-2 decision in Park’s favor was a verdict so scandalous and so widely seen that those in power were compelled to act or risk plunging the sport into permanent oblivion. Forget that AIBA’s solution – the current computerized scoring system – was far worse than the original problem, the stench produced by this result was so powerful that an entire sport was forced to undergo a complete overhaul. 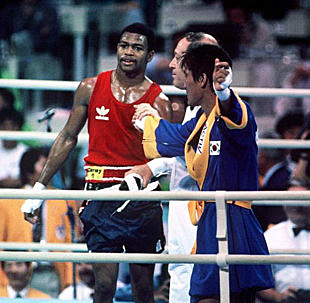 Jones’ overwhelming edges in hand and foot speed over the plodding, ponderous Park were almost comical. According to Count-a-Punch, Jones out-landed Park 20-3 in round one, 30-15 in round two (which included a standing eight) and 36-14 in round three. Soviet judge Zaut Gvadjava and Sandor Pajar of Hungary saw Jones a clear 60-56 winner under the 20-point must system – as did the rest of the world – but three judges, for whatever reason, saw fit to conduct judicial sabotage.

In round two – despite Jones having scored a standing eight and doubling Park’s connects – Uganda’s Bob D. Kasule scored the round even while Morocco’s Hiouad Larbi and Urugray’s Alberto Duran gave Park a 20-19 edge. The third round was even worse as the trio gifted Park with a 20-19 lead despite taking a thorough whipping. In the end, Gvadjava and Pajar had Jones ahead 60-56 while Larbi and Duran had it 59-58 for Park. The deciding vote was cast by Kasule, who scored the fight 59-59 but voted for Park because of “aggression.” This made no sense given that Park was battered into retreat for most of the fight. Then again, nothing about this result made sense.

The announcement of Park’s victory stunned the world, then enraged it. Larbi admitted after the fight that considerations beyond the ring influenced his scoring – but not nefarious ones.

“The American won easily, so easily, in fact, that I was positive my four fellow judges would score the fight for the American by a wide margin,” a chastened Larbi admitted. “So I voted for the Korean to make the score only 4-1 for the American and not embarrass the host country.”

Larbi’s admission did nothing to quell the fury. Nearly a decade later an International Olympic Committee probe revealed that South Korean officials bribed the three judges in question. Despite this finding the IOC stood by the original decision, which, in effect, robbed Jones a second time.

The heartbroken 19-year-old threatened never to box again during a post-fight interview at ringside. Thankfully for us – and the sport of boxing – Jones changed his mind and embarked on what will be a Hall of Fame professional career.

Lee Groves, a boxing writer and historian based in Friendly, W.Va., can be emailed at [email protected] He is a full member of the BWAA, from which he has won seven writing awards, including a first-place for News Story in 2011. He has been an elector for the International Boxing Hall of Fame since 2001 and is also a writer, researcher and punch-counter for CompuBox, Inc. He is the author of “Tales From the Vault: A Celebration of 100 Boxing Closet Classics.” To order, please visit Amazon.com or e-mail the author to arrange for autographed copies.

Named after ‘The Golden Boy,’ Oscar Collazo wants to make his own legacy