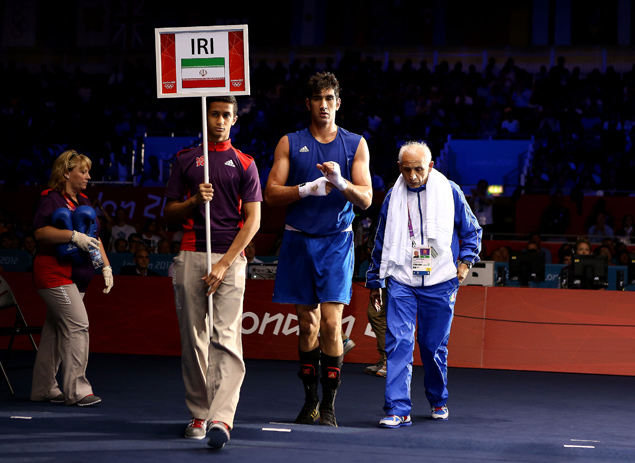 Ali Mazaheri of Iran leaves the ring after the referee’s controversial decision to disqualify him during his match against Jose Gomez Larduet of Cuba during the men’s heavyweight competition at the London 2012 Olympic Games. A disgusted Mazaheri leveled charges of corruption afterward. (Photo / Scott Heavey/Getty Images)

Between 1974 and 1976, a noted American carmaker profited mightily from a jingle that inserted the company into the nation’s culture. Those old enough to remember can probably hum the melody as he or she reads the following words: “Baseball, hot dogs, apple pie and Chevrolet.” For those too young to recall, look it up on YouTube.

Back then Olympic boxing was prominently featured in the U.S. thanks to ABC. Because of that coverage, which often took place in prime time, gold medalists Sugar Ray Leonard, Howard Davis Jr., Leon Spinks and Michael Spinks had the opportunity to become mainstream sports stars when they began their pro careers.

In subsequent years, Olympic boxing has marched to a more sour tune. While boxing has groaned under the weight of scandal since its beginnings in 1904, quantum leaps in worldwide communications over the past 30 years have amplified their size and scope. The political sewage that surrounds Olympic boxing would make any right-thinking person want to swerve his Chevy off the cliff just to get away from it. As it was, those controversies eventually drove Olympic boxing from NBC’s main network onto CNBC, the sport’s home for the past several games.

The shame of it all is that those who sacrificed the most – the boxers themselves – are the ones who are most directly victimized by the sins of its administrators. Just when a fighter believes he has done more than enough to advance to the next round – or, in some cases, have a gold medal draped around his neck – his dreams are cruelly snatched away by those who didn’t have to take a single punch. The ramifications of those decisions far exceeded that of the moment in question; not only did it affect their legacy as amateurs, it also negatively impacted their ability to draw big money and high-profile coverage from the networks, at least in the beginning.

Each injustice is yet another assault on one’s sense of right and wrong. The fury one feels for the athletes is furthered by the reality that all of these boxers had invested four years of their lives to arrive at their moment of truth – a moment of truth that outside forces transformed into a black hole of bitterness that could last a lifetime.

Come to think of it, the frequency and heart-wrenching impact of Olympic boxing controversies make those in the professional game look like…. amateurs.

It didn’t take long for the beast to reappear in London. The first huge controversy involved Japanese bantamweight Satoshi Shimizu, who fought Azerbaijan’s Magomed Abdulhamidov in the round of 16. Bolstered by a knockdown in round one and a standing eight in the second, Abdulhamidov led by seven points entering the third round. But in the bout’s final 78 seconds the Japanese conjured an incredible rally that resulted in six knockdowns, some from punches, others resulting from Abdulhamidov’s grappling and delaying tactics. 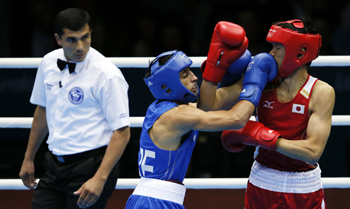 Despite all the knockdowns and a two-point warning against the Azerbaijani, he was credited with a 10-10 round and the two-point penalty only served to trim his margin of victory to 22-17. The boos resounded throughout the ExCeL arena after the announcement was read and, given the rarity of reversals, one had to think this travesty was going to remain on the books.

Thankfully, this Olympian atrocity was rectified a few days later as AIBA not only overturned the result but also expelled Turkmenistan referee Ishanguly Meretnyyazov. While that story had a happy ending – Shimizu has now advanced to the medal round – such was not the case for Iranian heavyweight Ali Mazaheri, who was disqualified for excessive holding in the second round of his match with Cuban Jose Larduet. The thoroughly dejected and disgusted Mazaheri, who walked out of the ring rather than dignify the ceremonial hand-raising of Larduet, leveled charges of corruption afterward. As it was, the German referee was suspended for five days.

“It was a fix,” Mazaheri told Reuters. “I could have got a bronze easily if it hadn’t been for that. In my previous fights I had done really well. It was a set up.”

Hundreds of boxers over the decades felt the same way as Mazaheri. It only took until the second bout in women’s boxing history for the first Olympic controversy to erupt. A questionable two-point penalty for holding was assessed against Brazilian flyweight Erica Matos – the one being held during that sequence – helped vault Venezuela’s Karlha Magliocco to a disputed 15-14 win. More incidents followed on Sunday in fights involving both genders, and one is only left to wonder where all the justice has gone.

The following is just 10 notable examples of the corporate stench that permeates a once-proud and dynamic sport. While this is not a definitive listing of the 10 worst decisions in Olympic boxing over the past 30 years – that would require exhaustive research and video review – this is a representative sample of episodes that illustrate what has gone wrong.