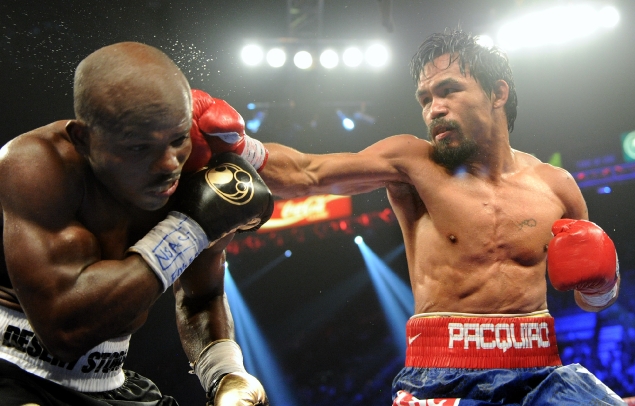 Top Rank CEO Bob Arum and advisor Michael Koncz will board the same aircraft from Los Angeles on Monday morning as they begin their trek to the Philippines, where they will discuss with Manny Pacquiao his options for a bout targeted for Nov. 10.

“We’ve been talking about things already, Manny and I, but I’m in Los Angeles right now,” said Koncz on Sunday night. “We should know by the end of next week.”

The top considerations for Pacquiao (54-4-2, 38 knockouts) appear to be return bouts with either newly-crowned WBO welterweight titleholder Tim Bradley (29-0, 12 KOs), four-division titlewinner Juan Manuel Marquez (54-6-1, 39 KOs) or three-division titlewinner Miguel Cotto (37-3, 30 KOs), although Koncz said “there are other candidates,” adding, “there are a lot of things in the works right now.”

One of those “things” could involve working to make a Pacquiao fight with Floyd Mayweather Jr. for sometime next year, a fight for which negotiations between Top Rank and Golden Boy Promotions, which has promoted Mayweather’s past six bouts, have failed several times before.

Mayweather (43-0, 26 KOs) was released from the Clark County Detention Center on Aug. 3 following more than two months in jail, and is expected to begin running TMT (“The Money Team”) Promotions alongside his friend, rapper 50 Cent (aka, Curtis Jackson).

“Floyd just got out [of prison,]” said Koncz. “Floyd’s not ready to fight Manny this year.”

Arum informed RingTV.com that he believed he could work with Mayweather and 50 Cent to make a bout against Pacquiao.

“I would think that if [50 Cent] promoted Floyd, then it would make a matchup between Pacquiao and Mayweather that much easier. You would have somebody that is a friend and a mentor that he can rely on and they would protect his interests in any kind of promotion, and I would be on the side of Pacquiao,” said Arum.

Although it is unclear what Mayweather’s relationship will be with Golden Boy Promotions in the future, Golden Boy CEO Richard Schaefer has expressed optimism about working with 50 Cent.

At any rate, Mayweather-Pacquiao wouldn’t happen until after November, when Bradley could get another shot at Pacquiao after winning by controversial split-decision in June to end Pacquiao’s 15-bout winning streak that included eight stoppages.

Arum has hinted that Pacquiao might seek to face Marquez rather than a contracted return bout against Bradley. Marquez lost by disputed majority decision in November to Pacquiao, against whom he had battled through a draw and a split-decision loss previously.

Cotto is coming off a unanimous decision loss to Mayweather, who added Cotto’s WBA junior middleweight belt to the WBC welterweight crown he already owned in May.

Cotto had scored three straight stoppage victories since being losing by 12th-round knockout to Pacquiao in November of 2010, including December’s 10th-round stoppage of Antonio Margarito to avenge the first loss of his career.

Schaefer has also indicated that he has spoken to Cotto concerning a return on Dec. 1 at Madison Square Garden.

“We are holding the December 1 at Madison Square Garden in New York for Miguel Cotto,” said Schaefer. “Miguel asked us to hold that date, and that’s what we’re doing. So we’re working on that.”