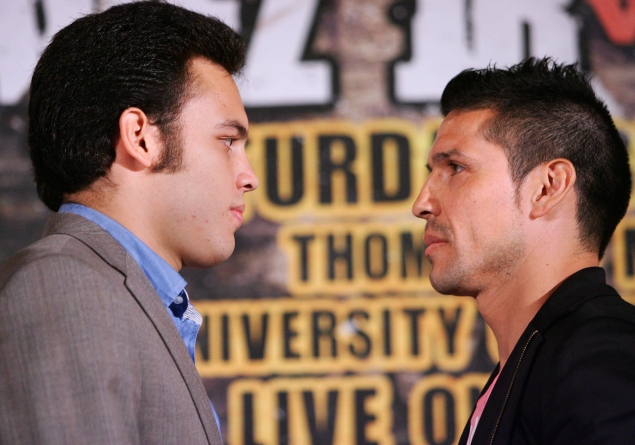 Martinez-Beltran is to be contested on the undercard of an HBO Pay Per View-televised main event featuring RING middleweight champion Sergio Martinez (49-2-2, 28 knockouts) and WBC beltholder Julio Cesar Chavez Jr., (46-0-1, 32 KOs) according to Top Rank CEO Bob Arum, who is promoting the show.

Martinez and Beltran are fighting for the belt that was vacated by Adrien Broner (24-0, 20 KOs), whose fifth-round knockout of Vicente Escobedo was contested over the junior lightweight limit because Broner missed weight by 3 1/2 pounds, an infraction that cost him his WBO belt at the scales.

In October, Martinez (25-1-1, 16 KOs) scored one knockdown in the third, and two more in the sixth and final round of his stoppage over Nigerian southpaw Daniel Attah, of Washington, D.C. The win over Attah helped Martinez, 29, to rebound from a unanimous decision loss to then-WBO junior lightweight titleholder Ricky Burns, of Scotland, in September of last year.

Beltran, 23, meanwhile, has won five straight fights, two of them by knockout, since falling by 10th-round stoppage against Joksan Hernandez in April of 2010.

The winner of Martinez-Beltran must face Burgos (30-1, 20 KOs), a 24-year-old winner of five straight fights, two of them by knockout, since falling by unanimous decision to Hozumi Hasegawa in November of 2010. Last month, Burgos stopped previously unbeaten Cesar Vazquez in the third round.

Another matchup on the card is that featuring two-time middleweight title challenger Matthew Macklin (28-4, 19 KOs), of England, and Haitian-born Joachim Alcine (33-2-1, 19 KOs) of Canada.

“The response and support for the card has been absolutely overwhelming. Virtually all of the seats on the first level have been sold. The seats on the second level are more than halfway sold, and we have approximately 4,000 seats left, so we’re looking forward to a sellout.”

Rigondeaux, who turns 32 in September, will be after his fourth straight stoppage win against Marroquin, who turns 23 on Aug. 21 and has won three straight fights since losing by split-decision to Francisco Leal in April of last year. 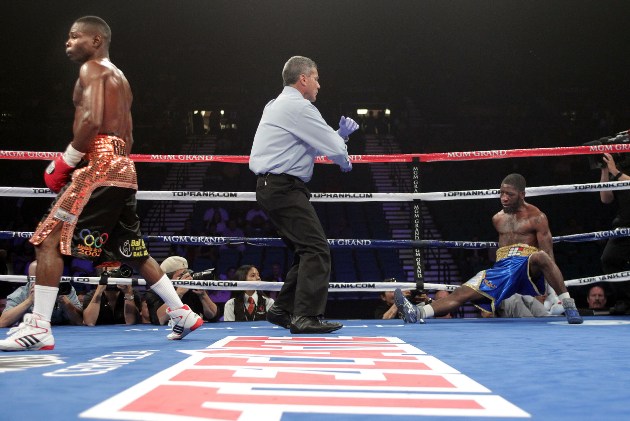 Macklin has lost his last two title bouts by disputed split-decision to WBA beltholder Felix Sturm and 11th-round knockout to Sergio Martinez in June of last year and March, respectively. Alcine is coming off an upset win over David Lemieux in December.

The card will also showcase light heavyweight prospect and Notre Dame graduate Mike Lee (10-0, 6 KOs), who has trained with Ronnie Shields in Houston, Texas, and has become popular due to his appearances in Subway commercials.

“Subway has asked us to put Mike Lee on the pay per view card,” said Arum of Lee, a Chicago native who is coming off a second-round knockout of Tyler Seever in Las Vegas on Saturday night. “So they’re going to give us a lot of big advertising support.”