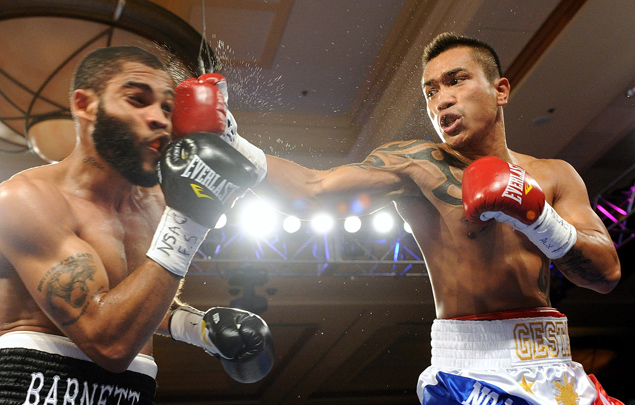 Unbeaten lightweight Mercito Gesta showed why he’s a young prospect to watch and why he’s still a work in progress with his ninth-round stoppage of Ty Barnett in the main event of a Friday Night Fights card at the Texas Station Casino in Las Vegas, Nev.

Gesta, who convinced referee Jay Nady to stop the fight after dropping Barnett with about 15 seconds left in the ninth round and again a split second after the bell, displayed impressive speed and power, solid whiskers and good offensive and defensive technique.

However, the Filipino southpaw was inconsistent in his attack, often threw one power shot at a time and had lapses in his focus. 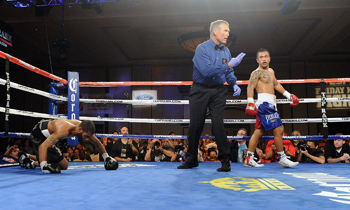 Had Gesta (26-0-1, 14 knockouts) fought a more consistent fight, put his punches together and made a concentrated effort to check the questionable chin of his opponent the 24-year-old boxer-puncher would have no doubt scored an early or middle-rounds knockout.

It seemed like Gesta was on his way to an early stoppage anyway after he repeatedly stunned Barnett (20-3-1, 13 KOs) with straight lefts in the first two rounds of the ESPN2-televised bout.

However, the 29-year-old Washington, D.C. native boxed a determined fight, popping his jab, utilizing lateral movement, and occasionally planting his feet and digging body shots and right hands into his foe.

Barnett seemed comfortable and in control in rounds three and four, but he was hurt badly midway through the fifth and Gesta stalked and punished him for the remainder of the round.

Gesta, who landed 20 of 58 power shots in the fifth round, according to CompuBox, continued to walk Barnett down during the second half of the fight but he wasn’t able to put enough pressure on his defiant opponent to take him out.

It looked as though Barnett would last the distance until Gesta finally landed a three-punch combination late in the ninth round.

Gesta didn’t make a case for contender status or a title shot with his performance but he proved to be one of the better – and most dangerous – prospects in the 135-pound division. 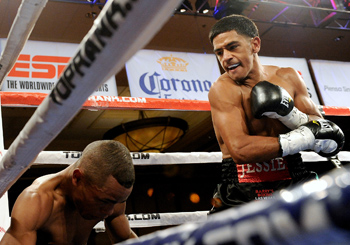 stopping Aldimar Santos in the second round of the opening bout of the broadcast.

Magdaleno (11-0, 8 KOs), a 20-year-old southpaw from Las Vegas, dropped Santos with a wicked left hand in the final seconds of the first round. The former amateur standout went on the attack at the start of the second round, backing Santos (17-3, 9 KOs) to the ropes where he floored the 31-year-old Brazilian fighter with another huge left with 20 seconds left in the round.

Santos beat referee Robert Byrd’s 10 count but he was quickly overwhelmed along the ropes. Byrd waved the bout off at 2:54 of the round.