Adamek aims to keep his streak going against Walker 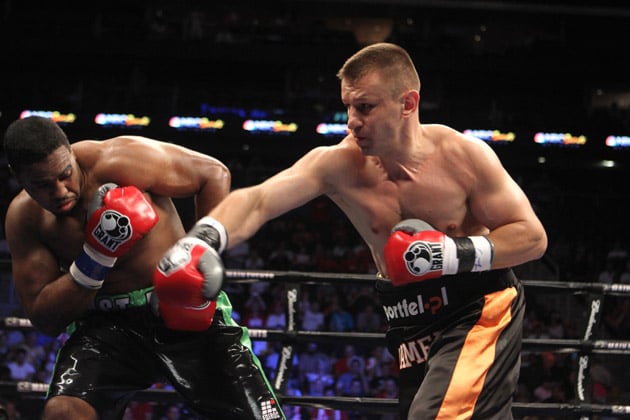 Former light heavyweight and cruiserweight titleholder Tomasz Adamek will meet journeyman Travis Walker on Sept. 8 at The Prudential Center in Newark, N.J., where he has not lost in nine previous appearances.

“We are calling this fight ‘The Ironbound Throwdown.’ This will actually be Tomasz’s 10th fight at Prudential Center,” said Kathy Duva, president of Main Events, during a Wednesday press conference at The Prudential Center.

“This is one of the great runs in the history of the sport. To have a local fighter who is so dominant, who has such a beautiful, big fan following. We are pleased here at Main Events to bring him back to Prudential Center, the best venue in the world.”

“I’m here to put on a good show,” said Walker. “I came to camp in better shape to deal with Tomasz’s speed and movement. I’m going to bring a different kind of a fight for myself as well because I know he is going to throw a lot of punches so I have to be ready to throw a lot of punches as well. The best thing about me is that I have power of mind, so it’s going to be a real good fight.”

“They run as much as they want, they’re going to get caught. I’ve got a great show for y’all. I want to make this fight a showcase of my skills. I’m already in a very good form, but this is just a beginning. I’m expecting Adamek to throw a lot of punches, but I also want to be busy in the ring. Maybe busier than usual. I will have special tactics for this fight. I have nothing personal against Adamek, I want to thank him for the opportunity, but I will also hit him with a purpose.”

Since falling to WBC titleholder Vitali Klitschko by 10th-round knockout in September, Adamek has won two straight unanimous decisions over Nagy Aguilera and Eddie Chambers in March and June, respectively.

“I don’t run, I just have great foot work, I love combinations,” said Adamek. “I love making big fights for my fans. I will fight Travis, no worries. I like to hit my opponents with quick combinations, you could see this in my Nagy Aguilera fight. Travis likes to throw the leather, I’m known to do the same, so it will be a fan-friendly event.”

“I’m expecting Travis to be an aggressive fighter, because he believes than he can overwhelm me with just his size and his jab. I heard this before. For the last three weeks I’m training hard, I have five more weeks of hard training with Roger Bloodworth in front of me. It should answer Travis’ question of have I overlooked him. Don’t count on it, Travis.”

Co-promoted by Ziggy Promotions, the fight will be televised in Poland on pay per view, although arrangements to televise it in the United States have not yet been made. Doors open at 1:30 p.m., and the first bout is scheduled for 2 p.m.

“This fight will be also an important bout for my countryman in Poland. They will be able to see me in primetime, without the necessity of waking up in the middle of the night on September 8. And celebrate afterwards, of course,” said Adamek.

“Nobody can tell me that I’m choosing easy fighters to fight. First of all, I don’t choose them, I just say OK when my people tell me the name of the next guy. Second, after fighting possibly one of the most skilled heavyweights in the world, Eddie Chambers, in my next fight I (am battling) a hard hitting, big guy like Travis Walker. Not an easy thing to do, but boxing is a sport for fans, and I try to deliver every time I step into the ring.”

“The undercard of this show has not been announced yet, but it will be announced in the coming week or so,” said Duva. “At this point we know for sure that Bryant Jennings who appeared on Tomasz’s last show will on this card.”

“We will announce his opponent and several other heavyweight matches that will be on this card, so for fans of boxing there will be a lot more action and a lot more to get excited about.”