Martirosyan or Proksa eyed for Golovkin 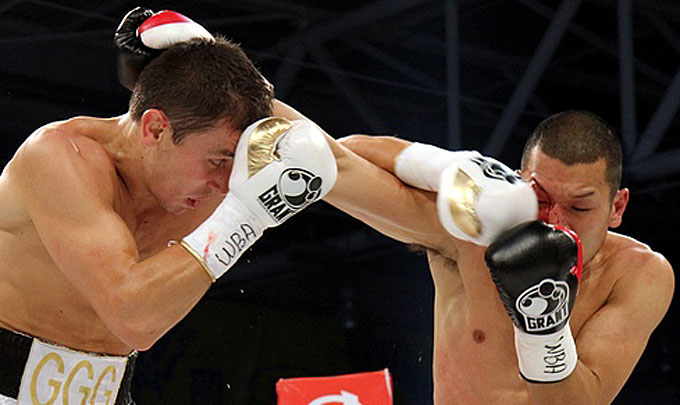 Unbeaten junior middleweight Vanes Martirosyan is being considered for a clash with WBA middleweight titleholder Gennady Golovkin on Aug. 25 in the wake of the recent back injury that forced Golovkin’s WBO counterpart Dmitry Pirog to pull out of their HBO-televised bout.

The talks were confirmed by Tom Loeffler of Golovkin’s promoter, K2 Promotions, as well as the uncle and manager of Martirosyan (32-0, 20 knockouts), Serge Martirosyan, and Martirosyan’s promoter, Top Rank CEO Bob Arum.

“I want to get back to the office,” said Arum, whose headquarters are based in Las Vegas. “But we’ll discuss that this week.”

Loeffler said that another consideration is hard-punching, Polish southpaw middleweight Grzegorz Proksa (28-1, 21 KOs), who is coming off an eighth-round knockout of Kerry Hope on July 7 that avenged his only loss by majority decision to Hope in March.

“Vanes would move up in weight, and Proksa is the European champion at middleweight. They’re both really solid fighters. Proksa is in the running and would add more of a European flair to the show than would Vanes,” said Loeffler.

“But if either Vanes or Proksa takes the fight, then either of those would both be solid opponents. As far as Gennady is concerned, he would accept both of those guys. We should know by sometime next week.”

Martirosyan’s camp might also be involved in a purse bid for a WBC-mandated eliminator with junior middleweight contender and southpaw Erislandy Lara (17-1-1, 11 KOs), who is promoted by Golden Boy Promotions, on July 20 at the organization’s headquarters in Mexico City.

The winner of the bout between Lara and Martirosyan would become the mandatory challenger to face beltholder Saul “Canelo” Alvarez (40-0-1, 29 KOs).

“Right now, we’re originally ordered by the WBC to work out a deal to face Lara. But we’re looking to see if there is anything else out there as well. Lara is the plan ‘A,’ but we’re available for the Golovkin people if the price is right, of course,” said Serge Martirosyan.

“We let Top Rank know that we’re ready to take the fight. That was Vanes’ idea to face Golovkin, and I told Top Rank that if the offer is right, then we’ll take the fight. We’ll consider it. We’re waiting for an offer if they’re interested. So that’s where we are right now.”

Loeffler said that a fight between Golovkin and Martirosyan would be “very viable.”

“It’s very viable in the sense that Vanes is an undefeated fighter and he’s fought on U.S. television many times. He was also an Olympian during the same time that Gennady was an Olympian in 2004,” said Loeffler.

“Vanes has trained at the gym of Freddie Roach [in Hollywood, Calif.,] and Gennady train up in Big Bear [Calif.,] so it would be easy to promote the fight and do some publicity for that fight.”

A 29-year-old native of Cuba who lives in Miami, Lara is coming off a June 30 unanimous decision over Freddy Hernandez that followed a first-round knockout of Ronald Hearns in April.

Prior to facing Hearns, Lara had not been in the ring since July of last year, when he lost a disputed majority decision to fellow left-hander Paul Williams, which many observers thought Lara had won.

Alvarez is coming off his fourth defense of his belt against ex-titleholder Sugar Shane Mosley, whom he defeated by unanimous decision in May. Alvarez is scheduled to face Josesito Lopez on Sept. 15.