Kirkland: ‘If I’m going to fight with one arm, then pay me’ 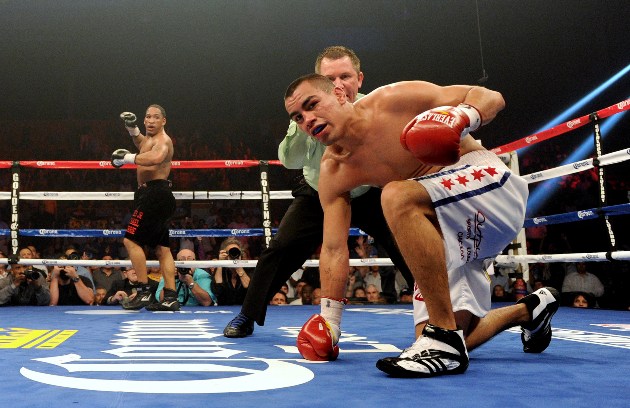 Hard-hitting southpaw James Kirkland told RingTV.com on Friday that he would still consider facing WBC junior middleweight titleholder Saul “Canelo” Alvarez for the “right amount of money” despite his assertion that he still has not fully recovered from surgery to his right shoulder.

“If I’m going to take a fight like this, and I’ve got one arm, and it takes time to rehabiltate and to train, then pay me for that,” said Kirkland. “I would do that, but pay me for it. If my career is over with after this fight, I want to make sure that I don’t walk away with nothing.”

Kirkland (30-1,1, 27 knockouts) had agreed on Thursday to replace Paul Williams as the new opponent for Alvarez in the wake of Williams’ career-ending injury from a motorcycle accident on Sunday that rendered the former two-time welterweight titleholder paralyzed from the waist down.

But Kirkland reportedy pulled out of the bout after having informed his co-manager and legal advisor, attorney Michael Miller, that he tweaked his shoulder during a Thursday evening training session and that he was not “at 100 percent.”

The development scuttled an agreement between Miller and Golden Boy Promotions CEO Richard Schaefer, who had struck the deal regarding the pay per view matchup between Kirkland and Alvarez (40-0-1, 29 KOs).

Schaefer said, however, that he was later informed by Cameron Dunkin, Kirkland’s co-manager with Miller, “Kirkland was just bulls–ting, that he’s not injured and he’s perfectly well, that he feels good, he feels great, and he feels ready to go, but that he’s not going to accept the fight for that kind of money.”

“He has a new advisor. Michael Miller and Cameron Dunkin, those are his two managers, and I made the deal with those two guys. So the new guy that he has as an advisor, that’s somebody else. It’s shocking.”

Neither Dunkin nor Miller could be reached for an immediate comment.

But Dunkin informed ESPN.com that he and Miller were sent an e-mail by a friend of Kirkland’s named Curtis Meeks, whom Dunkin said began serving as the fighter’s advisor.

According to Dunkin, Meeks said that Kirkland “would sign the contract today for $2.5 million and that he is ready to go for the right money.”

“Our answer was that James is injured. We won’t fight him if he’s injured, and said he’s obviously not going to be ready to fight Sept. 15,” said Dunkin.

“His answer was that James could fight later in the year, but that it would have to be for $2.5 million. This guy is obviously telling him he is getting screwed on the money, which is not the case.”

Kirkland denied having a new advisor, although he said that if he was pushed to face Alvarez with “an arm and a half,” that he should be compensated beyond the “six figures” he claimed he was offered.

“It was six figures. And that was an insult, and I’m being honest,” said Kirkland, who confirmed he requested at least $2.5 million. “That was one thing that I said. But they could work it to $2 million.”

Kirkland said he experienced pain in his right shoulder during his initial workout on Thursday. In March, Kirkland underwent surgery to repair two tears that were suffered during his 10th-round disqualification victory over Carlos Molina..

“Like I said, yesterday was my first day in the gym. Today was the second day. I worked out this morning, and it really took a toll on my arm. So I said, ‘maybe that’s because I’m just now breaking it in,'” said Kirkland.

Kirkland said he was then examined by a local doctor at South Austin Medical Center, a process that included his being X-rayed.

“He asked when I last had surgery, and I told him that I was getting ready to fight in September. He said, ‘I’m not a person in the sport game, but I know that tha if you want to fully recover,” said Kirkland. “He said, ‘I know that it’s going to take four to six months at most before you can use it like you used to use it.’ So he said that it would be a lot better to wait.”

Kirkland said that he would consider facing “a top-rated fighter like Alvarez” if he was paid more than he was being offered.

“Not that I’m saying that the offer that you’re giving me is not where it’s supposed to be at, but I’m putting my life and my career in the line, and my arm may never come back. It could jeopardize everything,” said Kirkland.