THE RING July issue: At a glance 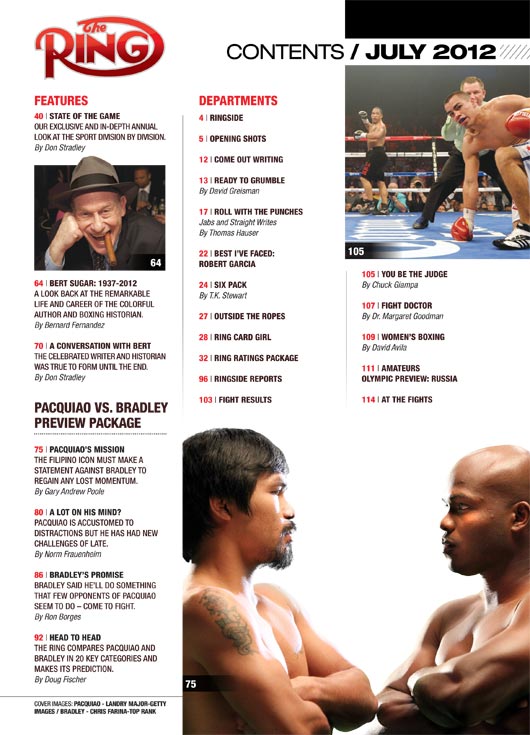 The biggest events in boxing these days involve either Floyd Mayweather Jr. or Manny Pacquiao.

Mayweather faced Miguel Cotto in a battle that exceeded most of our expectations on May 5 at the MGM Grand in Las Vegas. Now it’s Pacquiao’s turn.

The Filipino superstar is scheduled to fight Timothy Bradley on June 9 in the same arena on The Strip. And THE RING provides in a special preview package everything you need to know going into event.

Here’s a look at what you can find:

Also featured in the July 2012 issue is our popular STATE OF THE GAME package, an exclusive and in-depth annual look at the sport division by division, which was compiled by contributor Don Stradely.

And in SO LONG TO A TRUE ORIGINAL, by contributor Bernard Fernandez, we look back on the remarkable life and career of prolific author and boxing historian Bert Sugar.

Also, Stradley conducted one of Sugar’s final interviews – which we call TRUE TO FORM UNTIL THE END – in which one of the sport’s most-recognizable figures was at his engaging best.

Elsewhere in the July issue: