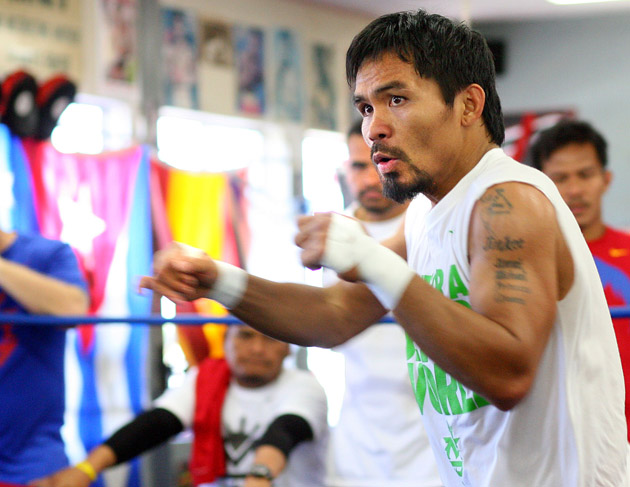 Although each of the vanquished was either a past or current titleholder at the time of their loss to Pacquiao (54-3-2, 38 knockouts), each already had tasted defeat at least once, with De La Hoya, Hatton, Cotto and Margarito having suffered knockouts.

But unlike any rival Pacquiao has faced, Bradley is a determined 28-year-old who is armed with an unbeaten mark of 28-0 that includes 12 stoppage wins. Bradley’s biggest wins have come against current or former world titleholders Kendall Holt, Lamont Peterson and Devon Alexander.

“I would say that obviously, when you look at Manny’s opponents, that the freshest guy that he’s going to have fought has been Bradley. The fighters that he’s fought up through Bradley have been great names like Cotto, Margarito, De La Hoya, Hatton,” said Top Rank Inc. CEO Bob Arum.

“But Bradley is not a great name. But he’s a great fighter and he’s young and he’s fresh. When you have a fresh fighter who hasn’t taken a lot of punishment in his career, he can be very dangerous.”

Bradley rose from to knockdowns to defeat Holt, won nearly every round against Peterson, and is coming off an eighth-round knockout of left-handed faded former lightweight champ Joel Casamayor.

Having vanquished left-handers Alexander and Casamayor in January and November, respectively, Bradley is confident as he faces his third straight southpaw in Pacquiao.

“I think that the important element with Bradley is his mind. He’s a very, very determined young man. Very confident and determined as far as his abilities are concerned, and that is a tremendous plus for any athlete,” said Arum.

“To have it where the mind really takes over and gives him the confidence in his performance. That’s a plus. So many athletes, no matter what the bravado, have doubts about their own performance. And that shows up in the event, whether it’s football, boxing or whatever.”

“I don’t think that we’ve fought anybody that muscular, and so forth, but we’ve fought bigger and stronger people like Margarito and guys like that. We’ve faced strong guys like him before.”

Pacquiao’s advantages, however, are “exprience, speed and power,” said Roach.

“His speed will be tough to deal with. His power will knock you out,” said Roach. “Experience will make it a little bit easier for you.”

BRADLEY: ‘WHATEVER MARQUEZ CAN DO, I CAN DO 10 TIMES BETTER’

Marquez (54-6-1, 39 KOs) has troubled Pacquiao over the course of three bouts — a draw and losses by split- and majority decision.

The youthful Bradley believes he is superior to the aging Marquez.

“He couldn’t stop a 38-year-old [Juan Manuel] Marquez, so he’s definitely not going to stop a 28-year-old like myself, Tim Bradley. He’s definitely not going to do that. I don’t know. Sometimes, I think that Freddie Roach is really naive about his fighter. Roach has confidence in his fighter, and that’s great, but I don’t think that they realize what they’re getting into, to be honest with you. I really don’t think that they realize it. They may think that Marquez just has Manny’s number, but whatever Marquez can do, I can do 10 times better,” said Bradley.

But Roach contends that he has developed a strategy that will solve Bradley’s style.

“I’ve been watching Bradley a lot, and I don’t think that he’s that good of a counter-puncher,” said Roach. “He’s very offensive, he comes to fight and I think that it will be a good fight for everybody and I’ve prepared my game plan for Manny after watching many many tapes of Bradley. We have the game plan set.”

Although Roach has considered a number of scenarios, he believes that eventually, Bradley will stand right in front of Pacquiao.

“My initial feeling is that, yes, I think that he will fight Manny. He’s going to try to show that he’s the better athlete and the more conditioned athlete. But I do have a runner and a mover that spars with Manny just in case that happens, so whatever he brings, we’re prepared for,” said Roach.

“It’s my job to maybe think of what he may do differently. If he tries to make adjustments, we’re making adjustments. So we’re trying to get our guy ready for whatever comes. So Manny’s ready for a slugger and he’s ready for a boxer and I’m covering all of my bases.”

PACQUIAO: ‘I’M PREPARED FOR WHATEVER HE BRINGS’

Pacquiao acknowledged that Bradley poses potential problems he has not seen in other opponents, even as he believes that he can solve them.

“Absolutely, yes. Bradley is a different fighter. We don’t take this fight lightly. We’ve trained hard for this fight. We know that Tim Bradley is not the kind of fighter that we can underestimate. Tim Bradley is undefeated and he’s a champion, so he’s handsome too,” said Pacquiao.

“I don’t know what he’s going to bring into the ring on that night, but I’m prepared for whatever he brings on that night. We expect that he will be in 100 percent condition, so in our training now, we’ve started to do different techniques and movement and boxing and fighting toe-to-toe. We’ve practiced tha in the gym, so we’ll be ready for the fight.”