17
May
by Doug Fischer

Best night of pro career: Serrano boxed his way to a tough eight-round majority decision over naturally bigger and more mature Ayib Bruce (15-2) in his 13thpro fight in July of 2010. Serrano, who had just turned 21, was troubled by Bruce’s size and physical strength but he used his superior hand speed and footwork to outpoint the game Ghanaian.

Worst night of pro career: Serrano, only 20, underestimated Anthony Bowman (9-36-2) and suffered a knockdown in the first round of his unexpected struggle with the Tennessee journeyman, who had lost nine straight entering their six-round bout in November of 2009. Serrano, who won a narrow unanimous decision, doubled Bowman over with a body shot in the opening round but the veteran sprung back up and dropped him with a hook. Serrano, who was also cut from a headbutt, fought back hard in the next round and scored a knockdown of his own in the third to secure the decision. 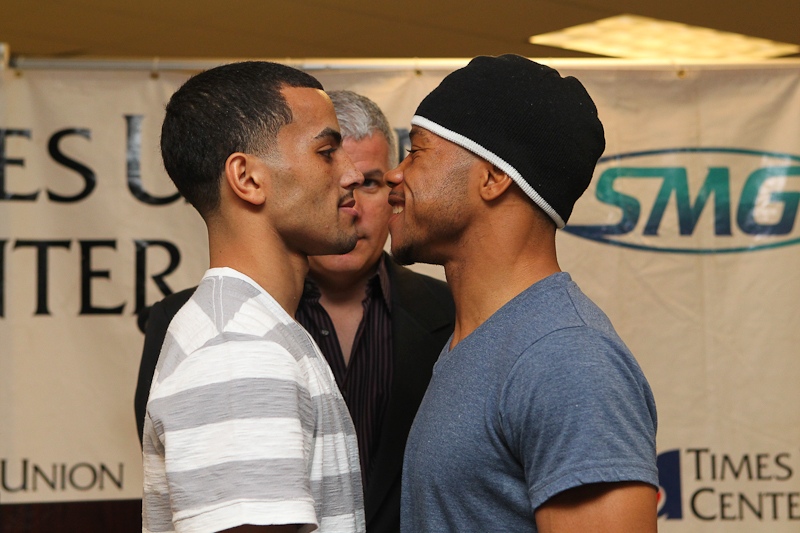 Next fight: Serrano takes on fellow unbeaten standout Karim Mayfield (15-0-2, 9 KOs), an awkward 31-year-old boxer-puncher from San Francisco, in the main event of an ESPN2-televsied card from the Times Union Center in Albany, N.Y., on Friday (May 18). Both fighters have fought in recent Friday Night Fights main events. Serrano got up from a third-round knockdown to outpoint Kenny Abril over 10 rounds in his last bout in February. Mayfield, who has fought most of his career at junior middleweight and welterweight, scored a 10th-round stoppage of veteran Steve Forbes last June before dropping down to junior welterweight where he outpointed Pat Lopez for the NABO 140-pound belt, which will be on the line Friday.

Why he’s a prospect: Serrano is a talented and versatile boxer with a strong amateur background. He also has an entertaining style. He likes to walk his opposition down behind a stiff jab, combination punching and a body attack, but he can also employ a stick-and-move style when he has to. Serrano has above average speed, decent power and nimble footwork.

Why he’s a suspect: Serrano has a bad habit of losing focus and form during his bouts, which has led to his being dropped by opponents he should have dominated (Bowman and Abril). He tends to load up on his power shots, dropping his normally high guard when he does so, thus leaving himself open and sometimes throwing himself off balance. He’s also still developing his “man strength.”

Story lines: Like many pro boxers, Serrano has fighting in his blood. His father, who introduced him to the boxing gym t age 8, was an amateur boxer. His uncle Ben Serrano was a pro middleweight who handed former WBO titleholder Doug DeWitt his first loss and raised his nephew, Kermit Cintron, who would go on to win a major welterweight title. Serrano took to boxing quickly and excelled a junior-level amateur competition. He won the national and international Junior Olympic tournaments in 2005. He took the Under-19 silver medal in the U.S. championships and won the Pennsylvania State Golden Gloves in 2006 before turning pro the next year. He’s been moved fast in the pro ranks, advancing from four-round to 10-round bouts in just three years. Serrano, who believes he’s faced stiffer competition than Mayfield, views himself as the more seasoned pro even though he’s younger than the Californian. “He runs his mouth about who he’s sparred with and he thinks that’s experience, but I think I have more real fight experience,” Serrano said. “I’m going to prove I’m the better fighter and hopefully I’ll get credit I deserve for beating an undefeated fighter.”