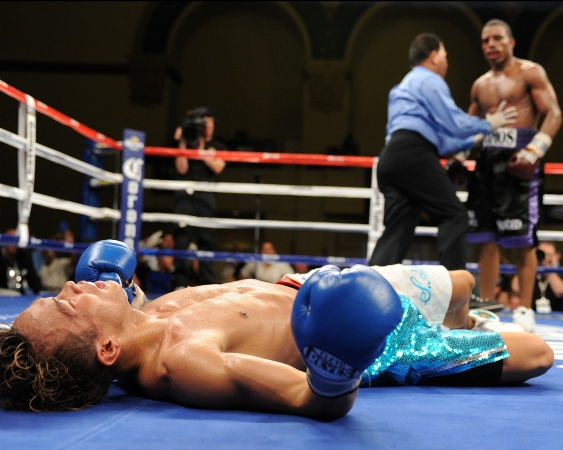 “Sometimes I think that Freddie Roach is really naive about his fighter,” said Bradley, referring to Pacquiao’s trainer, who told Bradley during an episode of HBO’s Faceoff with Max Kellerman that he was going to be knocked out in the fight.

“Freddie has confidence in his fighter, and that’s great, but I don’t think that they realize what they’re getting into, to be honest with you.”

From his Wild Card Boxing Club in Hollywood, Calif., on Thursday, where he is training Pacquiao (54-3-2, 38 knockouts) to face Bradley on June 9 at the MGM Grand in Las Vegas, Roach expressed supreme confidence that his fighter would earn his 16th straight victory and perhaps his ninth knockout during that run against Bradley (28-0, 12 KOs).

“I think that Manny will beat Tim Bradley pretty easily,” said Roach, who compared Bradley to Pacquiao’s second-round knockout victim, Ricky Hatton. “Bradley got mad when I said that he’s no better than Ricky Hatton, but he’s never impressed me.”

Pacquiao is coming off November’s disputed majority decision over Juan Manuel Marquez (53-6-1, 39 KOs), whom he had previously battled through a draw and a split-decision win.

“Juan really understands how to fight southpaws. He’s a very smart man and an excellent fighter. His deliberate and patient style of fighting is a product that comes from experience and experience against great opposition,” Pacquiao is quoted as saying in a recent press release from HBO.

“He’s a brilliant counterpuncher. My trainer, Freddie Roach, has said many times that Juan is the only smart one out there; the only fighter who has figured me out.”

Bradley is facing his third straight left-hander in Pacquiao, having decisioned Devon Alexander for the WBC’s junior welterweight belt in January of last year, and scored an eighth-round knockout over former lightweight champ Joel Casamayor on the Pacquiao-Marquez III undercard.

But Roach insists that it is Bradley who is in for a rude awakening.

“I’m not going to predict a knockout round. He’s a tough, durable guy. He gets in very good shape, but I don’t think that it’s going to go the distance. We’ll get him before it’s over.”