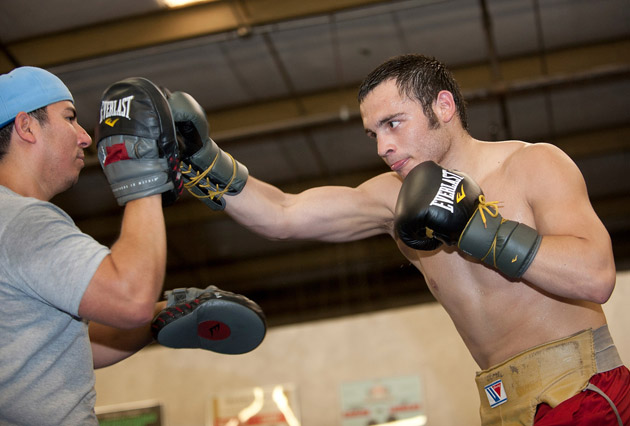 Five-time Trainer of the Year Freddie Roach and Top Rank CEO Bob Arum confirmed that Alex Ariza has been replaced as the strength and conditioning coach for WBC middleweight titleholder Julio Cesar Chavez Jr. in advance of Chavez’s June 16 defense against Andy Lee.

“That’s absolutely, 100-percent correct about Freddie working with Julio,” said Arum. “I talked to Julio and to his father, Julio Sr., and obviously they want Freddie.”

“I don’t know if (Chavez and Ariza) split or whatever, but that’s up to Julio,” said Arum. “But Julio has a conditioner that he’s very happy with, and he doesn’t need, at least for this fight, the services of Ariza.”

Roach is busy training Pacquiao (54-3-2, 38 KOs) at the Wild Card Boxing Club in Hollywood, Calif., for a title defense against WBO junior welterweight titleholder Tim Bradley (28-0, 12 KOs) on June 9 at the MGM Grand in Las Vegas. 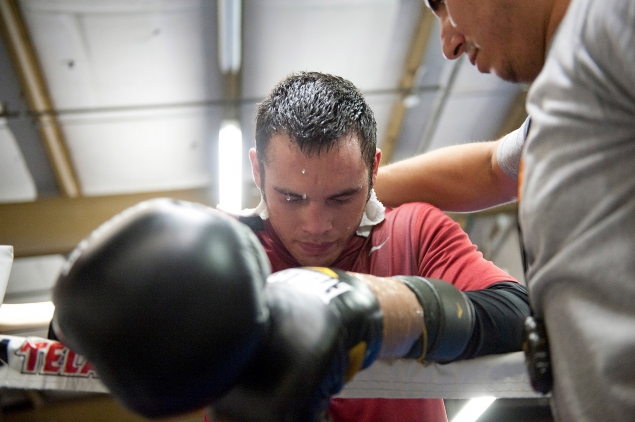 “Chavez is in Las Vegas right now training,” Roach said of Chavez, who is currently working with Valdimir Baldenegro. “Chavez has asked me to come in for the last two weeks after I’m done with Manny to help him out with the fight. I told him that I would do that, so that’s where we stand.”

Since Ariza began working with him, Chavez has solidified himself as a top-tier fighter with five straight victories, including decisions over New York’s tough John Duddy and previously unbeaten WBC titlist Sebastian Zbik, the latter of which earned Chavez his first-ever crown in June of last year.

Ariza was also in Chavez’s corner for his fifth-round stoppage of Peter Manfredo Jr. in November of last year, and, most recently, a decision over hard-hitting Marco Antonio Rubio in February.

“Alex Ariza hasn’t been allowed into his training camp, and so forth,” said Roach. “I’ve also heard that Chavez has hired a new strength trainer, so that’s all that I’ve heard. According sources at Top Rank, Ariza will not be there.”

Neither Roach nor Arum was immediately aware of the new strength trainer’s identity.

Meanwhile, Arum said that Roach will train Chavez at Top Rank’s gym in Las Vegas leading up to his clash with the southpaw Lee (28-1, 20 KOs) that is slated for the Sun Bowl in El Paso, Texas.

“Freddie is going to work in our gym with him here in Las Vegas. Manny’s fine with that during the fight week for the Pacquiao fight. So after that, Freddie’s going to go to El Paso with him,” said Arum.

“Absolutely. That’s 100 percent correct. What Julio said to me is that they rely on Freddie for strategy and all of that sort of stuff. They’re very confident with the other trainer, but they realize that he doesn’t have the experience and knowledge that Freddie has.”

Ariza had been with Khan (26-2, 18 KOs) for eight of his past nine fights, during which the Briton has earned two belts, knocked out New Yorkers Zab Judah and Paulie Malignaggi, beaten former beltholders Marco Antonio Barrera, Marcos Maidana and Andreas Kotelnik and, most recently, been dethroned by Lamont Peterson in December. 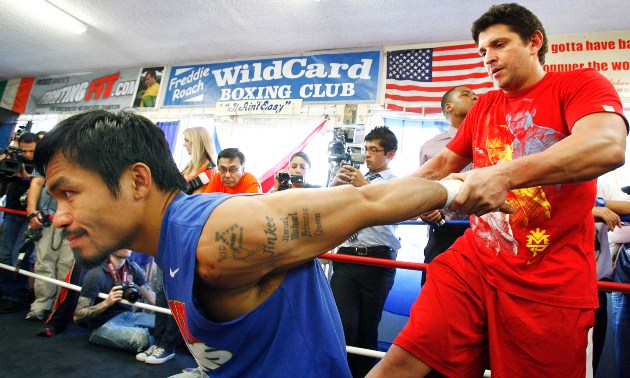 Ariza has been in the corner of Pacquiao over the course of his past eight victories, during which Pacquiao has won three title belts over as many different weight divisions, scored knockouts over Oscar De La Hoya, Miguel Cotto and Ricky Hatton and vanquished Juan Manuel Marquez, Shane Mosley, Antonio Margarito and Joshua Clottey.

Asked if Ariza still was with Pacquiao, Arum said, “for now, yeah.”

If Chavez defeats Lee, he has agreed to face RING champion Sergio Martinez (49-2-2, 28 KOs) in September. Should Chavez lose, Martinez already has signed an agreement to face Lee.