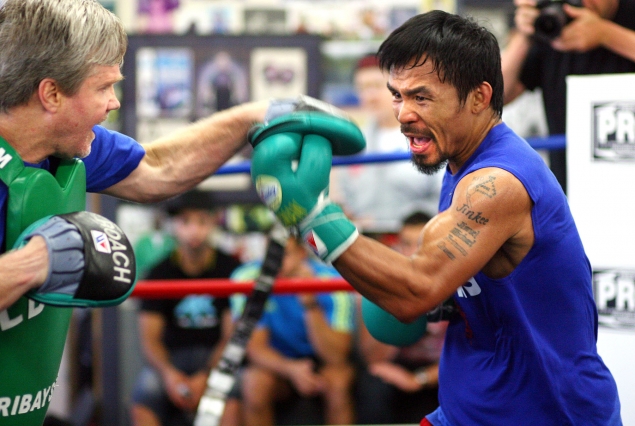 Manny Pacquiao’s progress is such that a fourth sparring partner had to be brought in this week as a result of the WBO welterweight beltholder’s brutality, according to his trainer, Freddie Roach.

“I am pleased with Manny’s pace of improvement,” Roach said during a Monday workout with Pacquiao (54-3-2, 38 knockouts) at his Wild Card Gym in Hollywood, Calif. “We’re bringing in a fourth sparring partner this week because Manny is really beginning to tee off on the ones we have in camp,”

Pacquiao will be taking a 15-bout winning streak that includes eight stoppages into his clash with WBO junior welterweight beltholder Tim Bradley (28-0, 12 KOs), which will take place at the MGM Grand in Las Vegas.

“Manny went 11 rounds on the mitts with me,” said Roach of Pacquiao, who landed in Los Angeles on Saturday night from Baguio City, Philipines.

“He was pretty strong, and I was happy with his workout. Manny’s timing and speed have improved daily since he began training at Wild Card one week ago.”

Pacquiao is coming off November’s disputed majority decision victory over WBO interim junior welterweight beltholder Juan Manuel Marquez (53-6-1, 39 KOs), the third bout of a trilogy in which each fight’s outcome has triggered controversy.