09
May
by Michael Rosenthal

Light heavyweight Marcus Browne and light welterweight Jamel Herring on Tuesday became the fourth and fifth Americans to qualify for the London Olympics at the Americas Qualifier tournament in Rio De Janeiro.

Browne, from Staten Island, N.Y., became the first American to qualify in Rio when he outpointed Felix Valera of the Dominican Republic 12-6. Herring, a Marine Corps sergeant from Coram, N.Y., defeated Yoekvis Hernandez of Venezuela in a back-and-forth battle 12-10 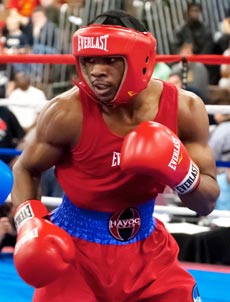 “Well it’s been a long road, but I finally got to where I wanted to with sacrifice and hard work,” Browne said. “I just want to thank all of the people who stood behind me through thick and thin. I can’t wait to get home and get focused on winning the gold in London.”

“I can actually say that hard work pays off,” he said. “I turned a dream into a reality, especially since about a year ago not too many people gave me a chance.”

Heavyweight Michael Hunter of Las Vegas also moved a step closer to a berth in the Games with a 25-7 victory over Marcio Figueroa of Venezuela to advance to the semifinal round. He must finish in the top three to qualify.