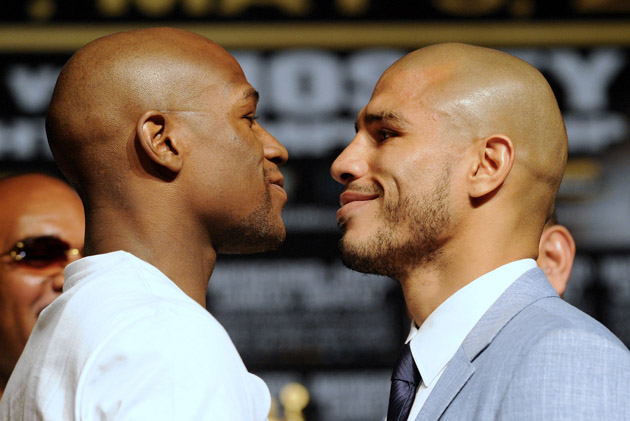 LAS VEGAS — WBC welterweight titleholder Floyd Mayweather Jr. will earn what is believed to be an all-time boxing record for a guaranteed purse of $32 million, four times more than the $8 million guarantee for his opponent, WBA junior middleweight beltholder Miguel Cotto, according to Keith Kizer, executive director of the Nevada State Athletic Commission.

The amount of Mayweather’s purse surpasses the previous mark of $30 million earned by Mike Tyson for his second loss to Evander Holyfield in June of 1997, according to Kizer.

“This is the largest guarantee ever in Nevada. Ever,” said Leonard Ellerbe, CEO of Mayweather Promotions. “And where are the big fights held? In Nevada.”

There is no telling what Mayweather will reap after all of the HBO pay-per-view numbers are totaled.

“That’s to be determined,” said Ellerbe.

Mayweather (42-0, 26 knockouts) earned a guaranteed $25 million for his fourth-round knockout of Victor Ortiz in September, and $22.5 million for his unanimous decision over Shane Mosley in May of 2010.

“It’s the biggest guarantee ever in the history of the sport,” said Golden Boy Promotions CEO Richard Schaefer, who told ESPN.com that his company was responsible for guaranteeing the money. “Nobody ever had a guarantee bigger. Floyd is in a league of his own. I think that this shows it again.”

Mayweather will pursue his eighth belt in five weight classes against Cotto (37-2, 30 KOs), whom he will meet in Saturday night’s HBO Pay Per View-televised clash from the MGM Grand.

MAYWEATHER, MOSLEY, JOIN UP FOR CHARITY

During a charity event on Thursday night held at the MGM Grand’s Talent Pool and sponsored by Mayweather and Mosley, the two fighters announced that they are donating $25,000 to the St. Jude’s Ranch For Children.

According to its website, the St. Jude’s Ranch For Children, which has three campus located in Nevada and Texas, serves abused, abandoned and neglected children and families, creating new chances, new choices and new hope in a safe, homelike environment.

Thursday evening’s poolside event was entitled “Spring Of Style.” The entertainment and fashion show was sponsored by The Floyd Mayweather Jr. Foundation and the Sugar Shane Mosley’s Diamond’s Love Foundation, and procedes from tickets also went to charity.

“It was a wonderful evening,” said Ellerbe. “It was just another example of Floyd showing the philanthropic side.”

Mayweather’s foundation is aimed at empowering and promoting the social development and advancement of struggling adults and adolescents, focusing on community health and wellness, economic growth and development and youth education.