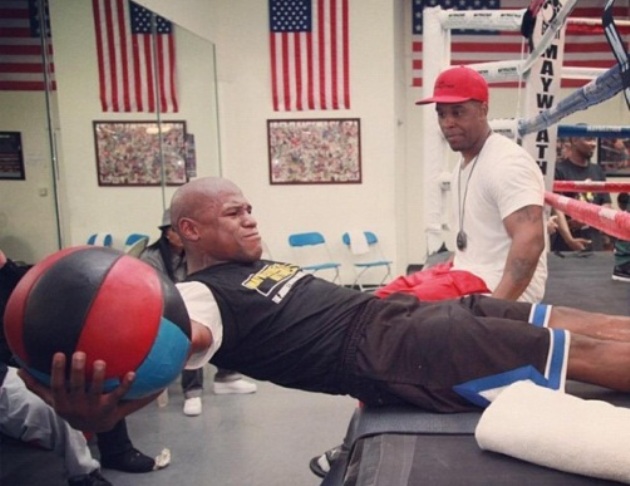 Floyd Mayweather Jr. is now just five days from his May 5 challenge for the WBA junior middleweight belt owned by Miguel Cotto at the MGM Grand in Las Vegas.

Mayweather is coming off Septermber’s victory over Victor Ortiz, whom he dethroned as WBC beltholder by fourth-round knockout.

The following was taken from a press release distributed by Golden Boy Promotions.

Question for Mayweather: You’ve taken very little punishment during your career, but at age 35, how much longer do you anticipate fighting?

“I plan to end my career when I am 37, but we will see how I feel then, too. At 35, I am in the best shape of my life. I’m dedicated to my craft and to the sport of boxing.  For those reasons, I know that as long as I feel and remain healthy, I can continue to fight for as long as I want.

“I have the best team, ‘The Money Team,’ in my corner who works with me day in and day out to make sure that I’m prepared every time that I step into the ring. Staying focused is definitely a big part of my success, and it will continue to be.

“At this moment, I’m the fighter to beat and I don’t see that changing anytime soon. Of course, I would like to fight for the fans too. They have supported me throughout my career, and without them, I would not be the fighter I am today.

“Forty-two have tried, 42 have failed. I will hang up the gloves when I’m ready. When my career is over, I know I will live with no regrets. Everyone asks about other fights and fighters I might fight, but none of that will affect my decisions to fight moving forward.

“I don’t live with regrets. No way. I work for me, I fight for me and I will always do what’s best for my career and my family. But right now, I’m focused on my upcoming fight with Miguel Cotto on May 5, and once I beat him, I can then worry about what’s the next step in my career.” 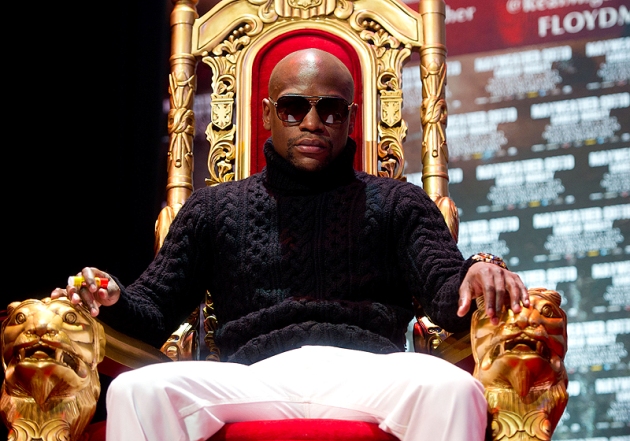 In advance of his clash with Cotto, Mayweather has not shied away from publicly addressing the controversy in other areas of his life in interviews with Bob Costas last month, and a subsequent one with Michael Eric Dyson earlier this month.

During each, he discussed his off-again-on-again relationship with his father, Floyd Mayweather Sr., whom he claims is “jealous” of his uncle and trainer, Roger Mayweather, addressed his perceived racial comments regarding NBA guard Jeremy Lin of the New York Knicks, and claimed it was he, not his pound-for-pound rival, Manny Pacquiao, who made the most recent attempt to make their potential megabout a reality.

With Dyson, Mayweather expressed his belief that he has the power to convince President Barack Obama to carry his title belt into the ring if he ever faced Manny Pacquiao, likened himself to Muhammad Ali in terms of the racial resentment and derision he appears to arouse from his detractors, and addressed his early life in a dysfunctional household that was affected by drug abuse and neglect.

With Dyson, Mayweather also addressed and his adversarial relationship with HBO commentator Larry Merchant, he spoke on his impending jail time and also delved deeper into his relationships with both a mother who was once addicted to crack and heroin, and Floyd Sr.’s past as a man who was once imprisoned for his actions as a drug dealer.

Mayweather admits that some of the drama depicted on shows such as HBO’s 24/7 series are meant to sell his image.

“I think it’s going to help with certain pay-per-view buys. It’s about having a sharp mind and having a strong business team around you. I think it’s a great thing, even with the Dyson interview. I think it was marvelous, because people had a chance to see how articulate I am and that I’m not just a young flashy hotheaded man that’s making a lot of money,” said Mayweather.

When all is said and done, I’m making smart business decisions. I understand when I’m on 24/7, it’s about the viewers. It’s about ‘you must watch TV.’ When I’m on TV, I want to keep people glued to the television, because that’s what it’s about. So even people that aren’t boxing fans are going to say, ‘you know what? We got to tune in and watch this guy. He’s very, very interesting. He’s a great story.’ So I don’t mind telling the story to the world.”

The flip side, said Mayweather, is that observers don’t always hear about his paying the medical bills for an ailing infant as well as for the funeral of former titlewinner Genaro Hernandez, or his efforts with Habitat For Humanity.

Mayweather was also subject to scrutiny during a recent open workout in his Las Vegas-based gym before the gathered media, fielding questions and providing a full display of training routines and sweating profusely after having hammered the heavy bag, slapped the speed bag and also briskly banged on the mitts with Roger Mayweather.

All of the activity was streamed live over a number of websites, including RingTV.com.

“I think I’m getting better with age. I think I’m really sharp. I’m still hungry. I think that if I was my opponent, I think when I look at it if he’s on the live stream, he has to say to himself, ‘I can’t watch this,’ because I think it’s going to throw my focus off,” said Mayweather.

“Because I know there’s not a fighter in the history of the sport that’s dedicated like I’m dedicated. There’s no fighter that’s going to work as hard as Floyd Mayweather, because, again, I have the will to win. I think that my opponent, once they show me on live stream, the opponent may let his trainer watch and the trainer don’t mind watching nbecause the trainer don’t have to get inside the ring.”

WILL 50 CENT FIGHT ON A FUTURE CARD?

Not only has rap artist 50 Cent become a mainstay in the Mayweather camp, but he may also get involved in the promotional side, if not, actually enter the ring.

“But we don’t just have a friendship, we have a tremendous bond. As far as with boxing, I think he’s going to be involved on the promotion side. We may even put him in there let him fight on pay-per-view one time.  So we don’t really know what the future holds, but he is getting involved with boxing.”