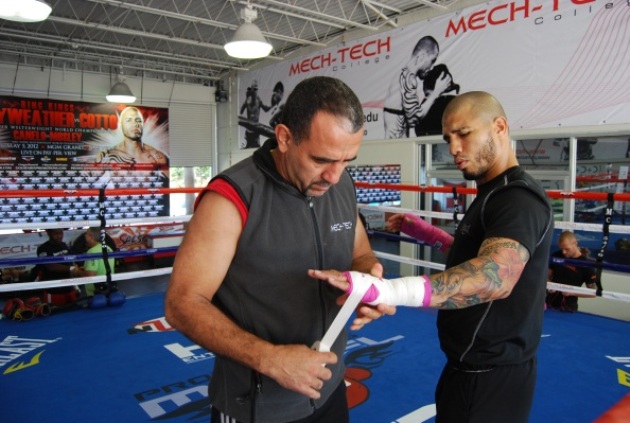 Less than a week away from the fight, Miguel Cotto is in the final stage of preparation for the May 5 defense of his WBA junior middleweight belt against WBC welterweight titleholder Floyd Mayweather Jr. at the MGM Grand in Las Vegas.

Mayweather (42-0, 26 knockouts) is after his eighth major crown over five weight classes against Cotto (37-2, 30 KOs), a three-division champion who has scored consecutive stoppage victories over ex-titleholders Yuri Foreman, Ricardo Mayorga and Antonio Margarito since his WBO welterweight crown was taken by Manny Pacquiao via 12th-round knockout in November of 2009.

The following was taken from a press release distributed by Golden Boy Promotions, the lead promoter of the card whose co-feature matches WBC junior middleweight titleholder Saul “Canelo” Alvarez against Shane Mosley, whom Cotto beat by unanimous decision in November of 2007.

Question for Cotto: Do you have any post-fighting career plans or aspirations?

“Right now my plans are for the May 5 fight. I aspire to do a lot of things in my life, but that’s not what is important today. This will be one of the biggest fights of my career, and I know it’ll be a victorious one. I feel that I am at a great place right now, and I feel very balanced. I think we shouldn’t forget the importance of balance.

“The last few years of life have been great for me as a boxer. I have learned quite a bit about myself, and what it takes to win. My fight with Floyd Mayweather will be great and exciting and I know fans desperately want to see it happen. The reaction this fight has gotten has been incredible, and the enthusiasm unmatched.

“No one should forget that I am very comfortable at 154 pounds, and that will be a huge asset going into this match. Also, there’s no doubt I have the power to win this fight. If anything, my power has strengthened. That will make the difference. Fans will also be thrilled to see me land some exciting combinations and ultimately see me emerge victoriously.

“I know Mayweather fans are very insistent that he only wins. But Floyd hasn’t fought what he will be fighting come May 5. On that day, Floyd is going to fight the best opponent he has ever been in a ring with, and the fighter is me. I can’t wait for this one.”

Hundreds of students assembled recently to catch a glimpse of the Puerto Rican beltholder and see him present the scholarships.

“I am very pleased with all the support we have received here this morning at Freedom High School to deliver this great scholarship from our friends at Mech Tech Institute to Harold Ruiz Beltran,” said Cotto. “He is an inspiration for other young individuals to follow their dreams.  Dreams come true when you work hard.”

Cotto has called Orlando’s Mech Tech Institute home for the past eight weeks as he prepares to face Mayweather.