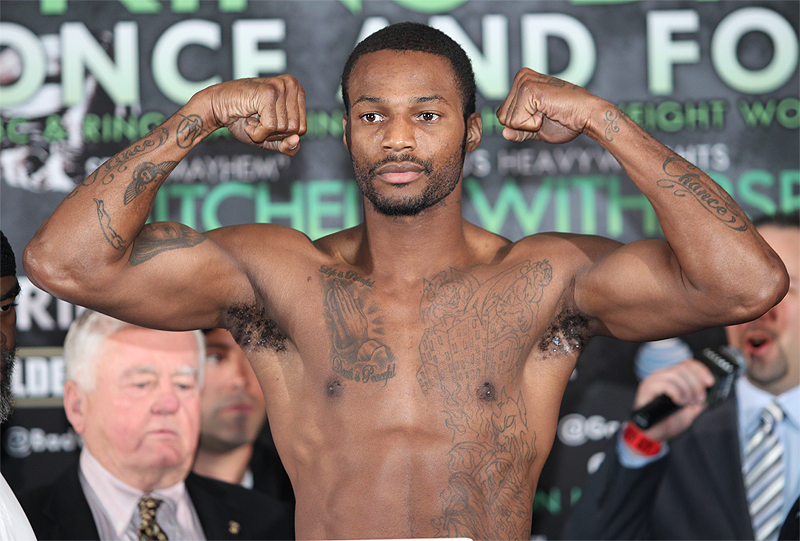 Dawson is back training under the tutelage of his personal favorite, Scully, with whom he grew up sparring with.

Trainer and fighter share a common bond, growing up in Connecticut, both notable fighters in their own right. With his trainer turmoil behind him, back with the teacher whom he’s most comfortable with, Dawson is full of energy and confidence headed into the biggest match of his career, his rematch with the legendary Bernard Hopkins (52-5-2, 35 knockouts) on Saturday in Atlantic City, N.J. (HBO, 10:15 p.m. ET).

Dawson (30-1, 17 KOs) will be looking to end the career of the venerable 47-year-old veteran, win THE RING light heavyweight championship in the process, and finally put to rest the controversy of their foul-filled first bout last October.

“I wanted to become myself again.  Me being with so many different trainers, I think that kind of derailed my own style and going all of these different ways,” said Dawson. “One trainer wanted me to work on this and another trainer thinks I’m better at this so I should be working on that.

“Well Scully is different because Scully knows all of my strengths.  So we add to that.  I’ve known Scully since I was 12 years old.  I sparred with him when I was coming up younger, earlier in my career.  So Scully knows me.  He knows everything about me.  We’ve been in the ring together.  So he knows my strengths and he knows my weaknesses.  So we had the chance to work on all of those things.”

The first fight was filled to the brim with controversy. The dubious end came in round two when Hopkins jumped on Dawson, in an apparent attempt to sap the 29-year-old southpaw’s energy, only to be roughly shed by Dawson via shoulder shove. Hopkins, of Philadelphia, Penn., writhed around on the mat in pain and the bout was ultimately called off to a dislocated shoulder suffered by Hopkins.

Dawson thinks Hopkins was looking for a way out.

“I wanted to let him know that I wasn’t going to put up with his tactics all night and I wanted to let him know ‘I’m strong, I’m too strong for you,’ and I think he felt that,” said THE RING’s No. 2-rated light heavyweight. “I’m going to keep saying this; Bernard did not want to be in the ring with me that night.  Maybe he undertrained and he didn’t expect to see what he saw that night.

“Maybe he needed more time to get in better shape.  I don’t know, but I’m here and I’m for real and I’m coming to fight.”

With the first fight only going two rounds, Dawson knows Hopkins got a glimpse of what to expect from him. He feels that this will eliminate any “feeling-out process” in the early rounds.

“I feel like even the first round is going to be the third round because I think Bernard got to feel me out a little bit,” said Dawson. “I got to feel him out a little bit.  So I think this for him makes for a great fight because we’ve been there.  With only two rounds we’ve both been in there with each other and we know what to expect.”

Scully is happy to be back with Dawson and thinks their relationship will buoy Dawson to the biggest win of his career.

“I feel like our boxing relationship is excellent because I’ve proven to him that things I’ve shown him work in the ring,” Scully told RingTV.com. “We like each other and respect each other because I’ve known him since he was a kid, we’ve sparred many times, been on many boxing trips together over the years. He knows that I understand him as a boxer from a mental standpoint and I’ve seen that this carries a lot of weight with him.”

Dawson wants the respect that Hopkins commands, but knows that in order to attain it he’s going to have to defeat the future hall of famer in impressive fashion.

“I admire everything he’s done in the sport of boxing over the last few years, you know, becoming the oldest world champion. Those are the things you can’t take away from Bernard Hopkins,” said Dawson. “You can’t take that away from him.  The only thing I have to do is go out there and dethrone him.

“I want to become the world champion.  I want the same recognition that Bernard gets.  So, on the 28th that’s what I’m going out to get.”