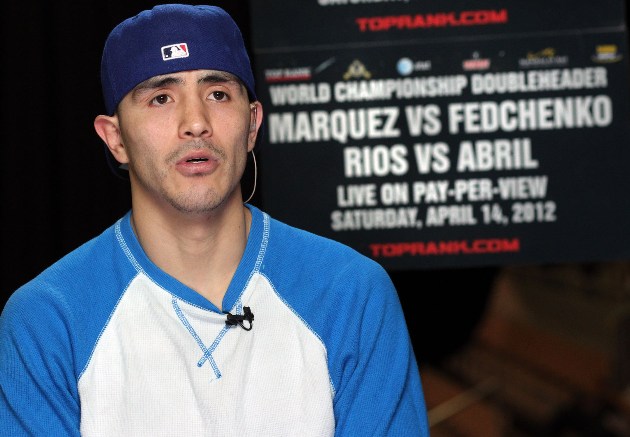 The winner of Saturday night’s WBA title clash between THE RING’s No. 1-rated lightweight Brandon Rios and Richard Abril will receive an extra $50,000 in accordance with Friday’s announcement by Top Rank President, Todd duBoef.

“Prizefighting is part of boxing’s heritage. In the early years of modern professional boxing, offering a bonus or ‘prize’ to the winner of a fight was a tradition,” said duBoef, in advance of their HBO Pay Per View televised-bout from the Mandalay Bay Hotel in Las Vegas.

“It added more excitement for the fighters and the fans.We wanted to bring the prize aspect back into fight game and this seemed to be the perfect platform to do it.”

Rios (29-0-1, 22 knockouts) and Abril (17-2-1, 8 KOs) have displayed so much animosity toward one another that two of their three press conferences have resulted in semi-brawls, and their third went without a posedown for fear that they might go after each other, yet again.

“After personally witnessing their animosity toward each other throughout fight week,” said duBoef, “I think Rios and Abril will be looking at the $50,000 bonus more as the spoils of victory than as a performance incentive. They can’t wait to go for it and one-up each other.”

In his latest volley at Abril questioned the intelligence of Rios, whose nickname is “Bam Bam.”

“You know why Rios is called ‘Bam Bam?’ Because he has pebbles for brains,” said Abril, who then made a reference to Rios’ having hired a nutritionist to assists with past weight-cutting issues.

“He has to pay a guy to teach him to eat right? I learned how to do that when I was three years old. He’s an idiot. I’m going to break his mouth, break his heart and break his piggy bank. Come on down Bam Bam. The prize is right for me.”

Rios is three inches shorter than the 5-foot-11 Abril, whom he believes will try to use his range to avoid the pressure of fighting toe-to-toe.

“I know he’s going to try and run from me all night like Forrest Gump. Run Robert, run.’ But on Saturday night, I’m going to turn Forrest Gump into Forrest Chump.”