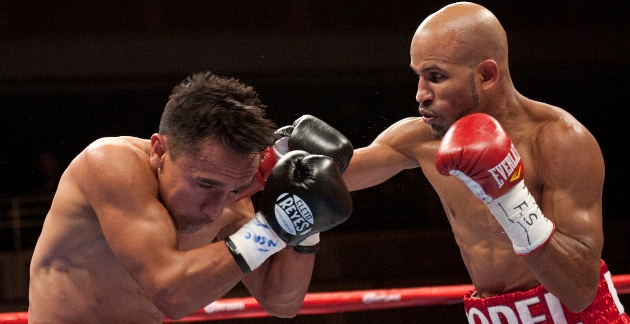 Former titleholder Eric Morel will be 10 years older than Abner Mares on April 21, when the elder man pursues his 12th straight victory and perhaps his sixth knockout during that run in a Showtime-televised clash from the Don Haskins Convention Center in El Paso, Texas.

In Mares, Morel is in against a young man who has endured a difficult schedule over a 20-month span through December of last year, having twice defeated ex-beltholder Joseph Agbeko, earned a decision over former titleholder Vic Darchinyan and battled to a draw with then-beltholder Yonnhy Perez.

A Puerto Rican-born Madison, Wis., resident and former 1996 Olympian, Morel will try to earn a title belt for the first time since August of 2000, when he won the WBA flyweight belt by unanimous decision over Sornpichai Kratingdaenggym.

Nicknamed “Little Hands Of Steel,” Morel defended that crown five times — twice by knockout– before losing it by unanimous decision to Lorenzo Parra in December of 2003.

In March of 2005, Morel lost his bid for the WBA’s junior bantamweight title by unanimous decision to Martin Castillo, and was subsequently convicted and imprisoned for three years for sexually assaulting a 15-year-old girl.

Morel returned to the ring with an eight-round, unanimous decision over Felipe Almanza in February of 2008 to begin his current winning streak.

In this Q&A, Morel addressed the challenge presented by Mares, as well as the potential for a bout opposite WBO junior featherweight titleholders, Nonito Donaire. 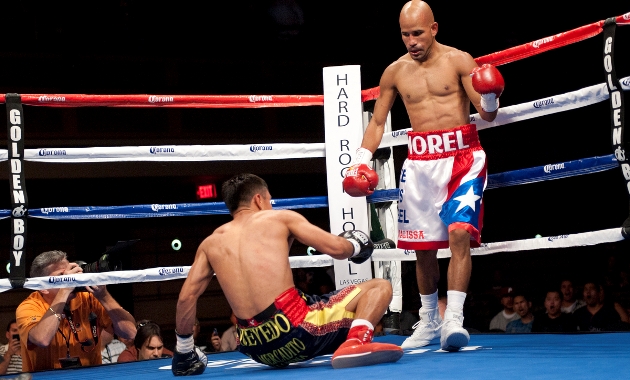 RingTV.com: What do you see in Mares?

Eric Morel: He’s a very complete fighter, as far as what I’ve seen. I’ve fought on his undercards twice when he fought Joseph Agbeko both of those times.

He’s very good. Very strong. He’s got speed and he can box. He can stay toe-to-toe. I mean, you name it, he can do it all. But that’s nothing something that I haven’t seen before. I’ve fought all types of fighters.

But his style is perfect for mine. I’m aware of his power and I’m aware of everything that he can bring. I’m confident that I can pull it off.

RingTV.com: When you were fighting on the undercards, did you envision ever facing Mares?

EM: Oh yeah. I know what I’m going to have in front of me. But he probably thinks that he has seen what I have in the past.

He probably thinks that it’s going to be a walk in the park, but it will not be. So I don’t know who is going to be under more pressure.

RingTV.com: Is is fights like this where you, as the veteran, feel challenged to display your experience and to attempt to show the younger man something that he has not seen?

EM: Most definitely, yes. This is another case of that. Because he might think that I’m 36 years old and that I’m at the end of my career. But we shall see. I’ve been there and done that. I’m still here.

For me to keep going, I’ve got to beat somebody like Mares. I’ve got to prove that I’ve still got it, and not just to myself, but to the general boxing fans.

RingTV.com: At this point in your career, what would a victory over Mares mean to your career, and, conversely, a loss to him mean?

EM: It would be a great win either way that you look at it. As far as my career goes, it would bring better opportunities and much bigger names.

Such as Nonito Donaire or [WBA bantamweight beltholder] Anselmo Moreno. There are a lot of names up at 122 that mean great opportunity to me and very exciting fights for the fans. 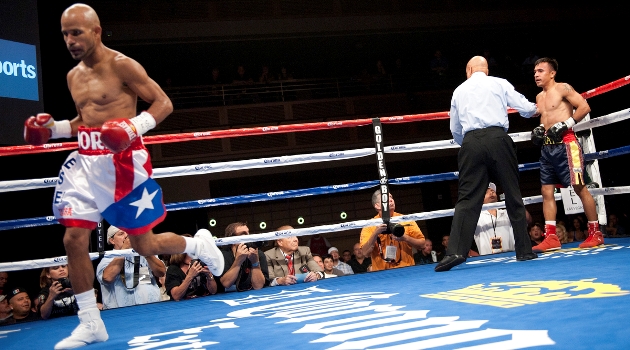 RingTV.com: Are you concerned about his having been penalized for low blows in the past against Vic Darchynian and Joseph Agbeko?

EM: I’m not concerned. No. That’s why the referee is there for. Hopefully, if the referee sees something going on, then he will step up to the plate.

In those situations, you hope that he will step up and take care of what needs to be done. So, no, I’m not concerned about any of that. I’ll leave that up to the referee.

RingTV.com: How much is your conversial past behind you and what lessons have you learned from that?