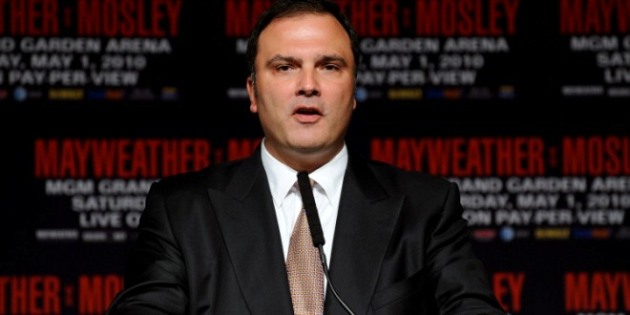 Richard Schaefer has signed a long term contract extension with Golden Boy Promotions, which will allow him to remain its CEO “for many years to come,” according to Schaefer.

Schaefer was hired in 2000 by Golden Boy President, Oscard De La Hoya, to run Golden Boy Enterprises, and, in 2003, was named CEO of the newly-created Golden Boy Promotions based in Los Angeles.

“I am thrilled to have Richard commit to a long-term contract extension with Golden Boy, as he is not only my trusted Chief Executive Officer, but he is one of my closest friends,” said De La Hoya.

“This is a very important day for the company, and another very exciting chapter in our storied path. We have achieved so much already, and I can’t wait to announce the many endeavors Richard and I have been working on over the past months to ensure our continued growth and success.”

“I am excited to extend my contract and look forward to working with the company for many years to come. Oscar is a visionary leader who has inspired millions as a fighter in the ring,” said Schaefer.

“And now he is doing the same thing outside of the ring with his ‘yes we can” attitude. I am proud of him, our Golden Boy staff, our partners and shareholders and most importantly our fighters who make the company what it is.”

Over the past ten years, Golden Boy Promotions has become a premier promotions company, increasing its revenue and events base yearly.

Golden Boy was involved in 103 boxing promotions in 2011, which translates into an average of nearly two fights per week on nearly every major boxing network in the United States and Mexico, including HBO, Showtime, Fox Sports Net, ESPN, Televisa, and Telefutura.

On May 5, Mayweather will challenge WBA junior middleweight beltholder Miguel Cotto on HBO Pay Per View from the MGM Grand in Las Vegas.

“Our success speaks for itself. Together we have built the company into a global promotions powerhouse and we will continue to make history every day,” said Schaefer.

“We have a great team of young, energetic and creative people working for and with us. I am looking forward to breaking new records together with them.”