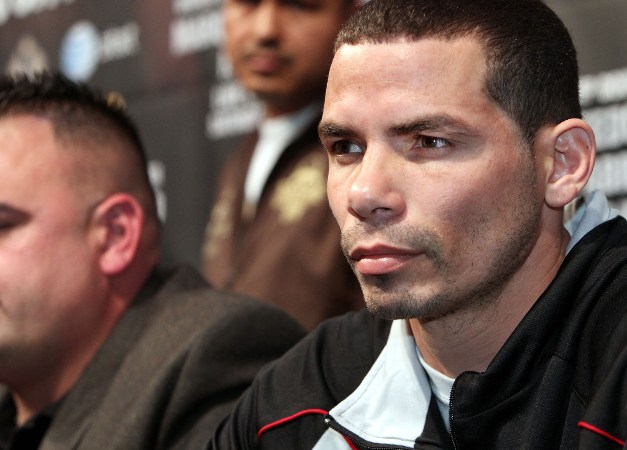 Richard Abril seems to be delighting in the fact that he’s a prohibitive underdog heading into Saturday night’s HBO Pay Per View televised clash with RING No. 1-rated lightweight Brandon Rios, a bout for which the WBC’s belt is on the line.

“I don’t like Rios. He’s got a big mouth. Rios is a good fighter. He has a Mexican fighting style,” said Abril, a winner of five straight, two of them by knockout. “But Saturday is going to be the end for him. My best weapon is my precision. That is my advantage over Rios.”

It is easy to see that Abril not only walks taller than Rios, but he also has the trash-talking mouth to match his adversary, with whom he has developed an animosity stemming from two recent press conferences during which brawls ensued between the fighters’ camps.

“I’m going to break Rios’ mouth when we fight. He’s said a lot of s–t,” said Abril, who then referenced Rios’ losing the WBA belt on the scales before his last fight — an 11th-round knockout of John Murray. in December. “I want Rios to make weight. I want him at his best when I beat him. No excuses.”

Abril truly believes that he can vanquish a man in Rios who is 12-0-1, with 11 knockouts in his past 13 bouts, including an 11-fight winning streak and stoppages in his last four fights. 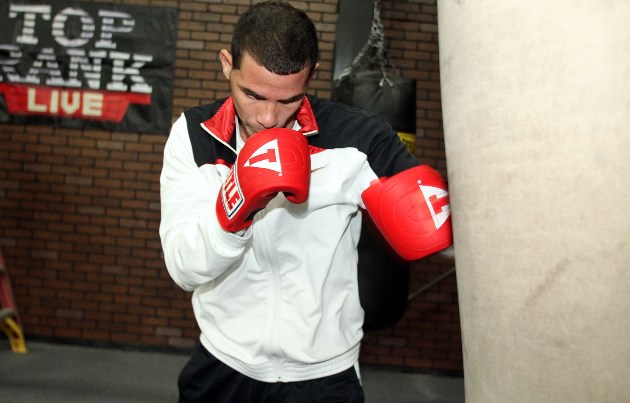 Abril was inserted as a replacement against Rios when unbeaten former featherweight beltholder, Yuriorkis Gamboa failed to show up at a Miami press conference last month, showing up to incite an already miffed Rios in the event’s aftermath.

That was the first tussle between Rios and Abril. The second occurred on Monday at the Los Angeles-based Millennium Biltmore Hotel’s Crystal Ballroom.

“I was surprised when Gamboa withdrew from his fight against Rios,” said Abril. “I thought Gamboa had a good chance to beat Rios. For a $1 million purse, I would fight King Kong.”

It may take a gorilla-sized effort from Abril to defeat Rios, who has achievements include a DQ win over then-undefeated Anthony Peterson in September of 2010, as well as a knockout of Urbano Antillon in July of last year.

Rios had earned the WBA crown in February of last year with his come-from-behind, 10th-round knockout of Miguel Acosta, whom he floored in the sixth, eighth and last round of a fight ended Acosta’s 19-fight winning streak. 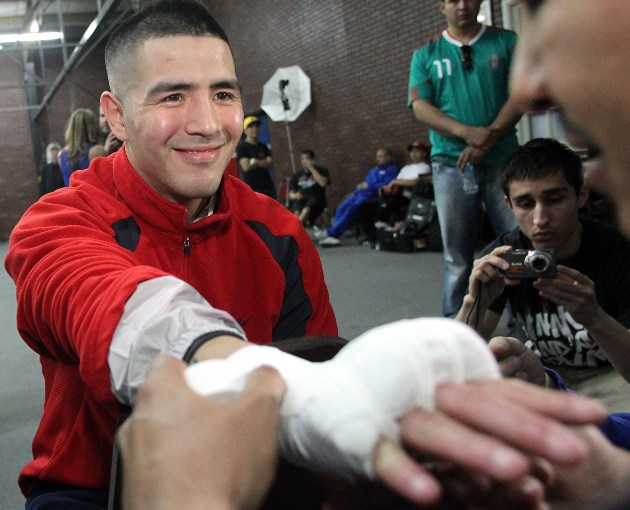 Abril has also beaten Acosta, and believes that his victory was more impressive than that of Rios. Abril dropped Acosta once in the fourth and twice in the 10th on the way to a unanimous decision in October of last year.

“When I beat Acosta to win the interim world title, I knocked him down three times during the fight,” said Abril. “I had a more dominant performance against Acosta than Rios.”

Abril has not lost since suffering a split-decision setback to Hank Lundy in January of 2010. Abril’s other loss was by split-decision in June of 2008 against Breidis Prescott, who went on to score a 54-second knockout in his very next fight over Amir Khan in September of 2008.

During the final press conference on Wednesday at the Mandalay Bay Hotel, Abril kept took yet another verbal shot at Rios, this time, at his advesary’s Mexican heritage.

“I ride horses, listen to Mexican music and speak the language,” said Abril. “I am more Mexican than Rios.”

“Juan Manuel M├írquez and I have a lot of options in 2012, and a lot of opportunities,” said Rios. “I think this could be a career year for either of us. One of us could end up as the Fighter of the Year.”

But first Rios must deal with Abril. 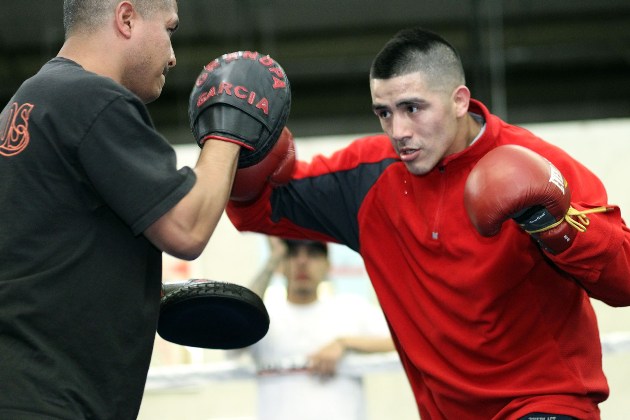 “I’m not letting this unknown come in and ruin eight years of hard work I put into building my professional boxing career,” said Rios. “I beat Miguel Acosta when he was in his prime, unlike Abril, who beat him on his way down on short notice.”

Much of Rios’ motivation comes from the fact that he wants to redeem himself for having given up his belt prior to facing Murray, who received an extra $20,000 as a result of Rios’ failure to make weight.

“I was disappointed when I lost the title because I lost the title to myself, on the scale and not to an opponent. It was my fault 100 percent,” said Rios, who missed the contracted weight of 135 three times, then weighed 146.4 pounds at a 9 a.m. weigh-in the day of the bout.

“The minute I returned home afterthat fight, I went straight to the gym to resume training and hired a nutritionist. It was the best decision I ever made.”

Rios said that a switch in nutritionists has made a big difference in the weight-cutting issues, having hired Cecilio Flores, who formerly worked with RING middleweight champion Sergio Martinez.

“I’m a beast,” said Rios. “I feel so much more energetic and powerful, and I’m not missing meals. I’m never hungry.”

Now all Rios wants to do is regain what lost, but this time, he’ll do it in the ring.

“I originally came back to 135 pounds to fight Gamboa and to win back my world lightweight title. I wanted my title back,” said Rios.

“I’m not the same without a world championship belt around my waist. I also think a world title makes me worth more. It makes me more valuable. I’m just a guy who loves to fight. I love my job.” 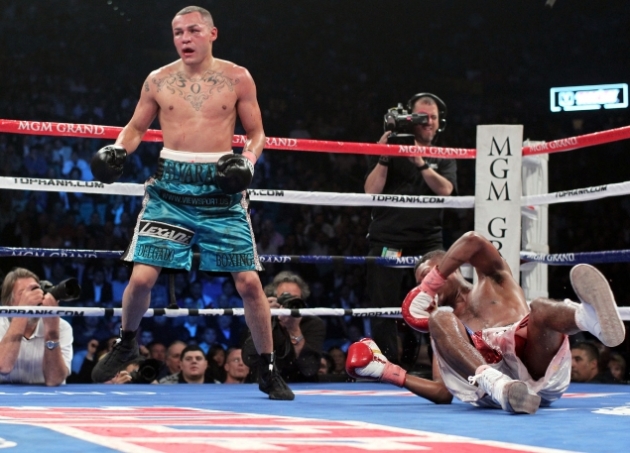 In his last fight, Alvarado rallied to defeat Prescott on the undercard of Manny Pacquiao’s disputed majority decision victory over Marquez in defense of his WBO welterweight belt in November.

In order to defeat Prescott, Alvarado overcame a fourth-round, right-handed uppercut that ripped open his left eye, causing a profuse flow of blood that hindered Alvarado’s vision for the remainder of the fight.

But Alvarado endured, his 10th-round assault flooring Prescott with a vicious left-right-left uppercut series. A similar volley forced referee Jay Nady to wave an end to the fight moments later.

Alvarado’s closing sequence was comprised of his landing 27 of 38 power shots in the final round.

“That was incredible. That was like a movie. You couldn’t script anything better. I mean, blood pouring down Mike Alvarado’s face, and he’s behind on the scorecards. The only chance that he has to win the fight is to drop this guy or to knock him out, and it looks like he’s fading in the ninth round,” recalled Arum at the post-fight press conference.

“And then, out of nowhere, he came on and he knocked the guy out. It was a Hollywood ending. That’s like the Rocky movies, you know, with the blood streaming down. That’ doesn’t really happen in real life. It was as dramatic as it could get with the blood pouring down his face and everything.” 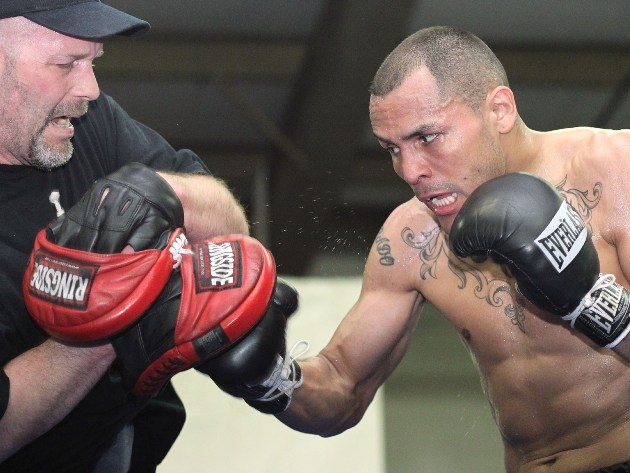 Alvarado trailed 87-84 on the cards of Patricia Morse Jarman and Lisa Giampa, and, 86-85, on that of Jerry Roth, meaning that he required the knockout to win.

“It was as dramatic as it could get with the blood pouring down his face and everything,” said Arum. “When I got into the ring after the fight, I said to Mike Alvarado, ‘Man, you’ve got a set of balls.'”

It was the biggest win in the career for Alvarado, who both dropped and stopped Prescott for the first time in Prescott’s career.

Next up is Herrera, a winner of five consecutive fights since falling by eight-round split-decision to Mike Achondo December of 2009.

Herrera is coming off June’s 10-round, majority decision victory over Mike Dallas Jr. (18-2-1, 7 KOs), who lost for only the second time in his career.

Herrera’s other big win was by 10-round unanimous decision in January of last year over previously unbeaten Ruslan Provodnikov, who has won four straight since then, three of them by knockout. 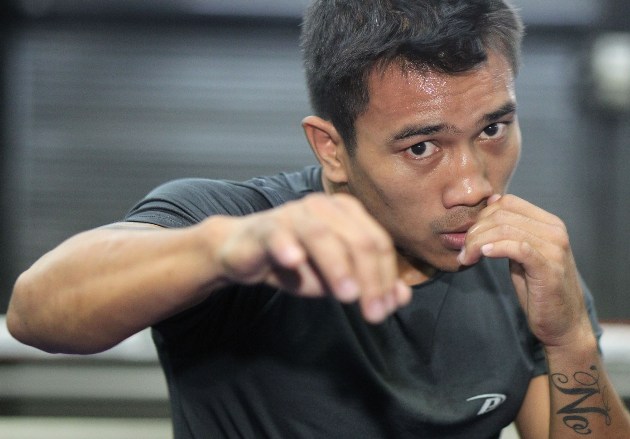 “The dual-site pay-per-view event will open at Mandalay Bay with Gesta, followed by Alvarado vs. Herrera and the Rios-Abril world title fight,” said Arum.

“The grand finale will send boxing fans to M├®xico City where they will get their first look at the brand new Arena M├®xico, and a projected full house, on hand to witness M├írquez’s attempt at history.”

A southpaw like Pacquiao, Gesta, who is 24, goes by the nickname, “No Mercy.”

In his past few fights, Gesta has shown exactly that.

Gesta has nine knockout victories over the course of his past 13 fights, and appears to be raising the bar with his performances.

Cuero ended a five-bout winning streak with knockouts of Alex Barrios and Luis Hernan Rodrigues on March 7 and March 24 in the second and fourth rounds, respectively.