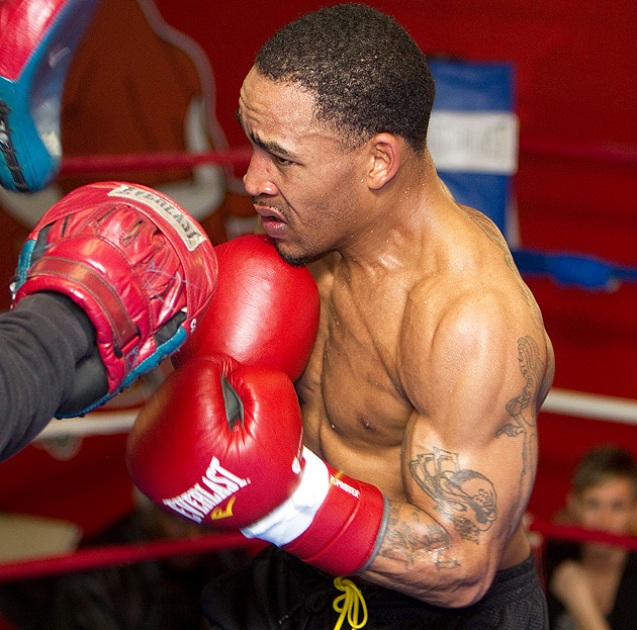 Hammer-fisted junior middleweight James Kirkland informed RingTV.com on Monday of his desire to face either IBF beltholder Cornelius Bundrage or WBC titleholder Saul “Canelo” Alvarez once he has completed rehabilitation from recent surgery to repair tears in his right shoulder.

Serious talks have taken place for a September 15 bout between Alvarez (39-0-1, 29 knockouts) and Kirkland (31-1, 27 KOs) should Alvarez get beyond a clash with former champ Shane Mosley on the Cotto-Mayweather undercard on May 5, according to Kirkland’s co-manager, Michael Miller.

Kirkland’s other possible target, Bundrage (31-4, 18 KOs), has a mandatory defense against ex-beltholder Cory Spinks in June.

Molina was the latest bout in which Kirkland has faced adversity, following his first-round knockout loss to Nobuhiro Ishida in April of 2011 and his come-from-behind, sixth-round knockout of Alfredo Angulo in November.


James Kirkland on when his shoulder began to hurt against Carlos Molina:


“I can’t really say. But I think that it was like in the fourth round. Maybe like the third or the fourth round. That’s when I started to sort of feel it in spurts. But I knew that I had to pull through the little bits of pain.

“It was really painful, but I had to pull through. So I was able to hold on. So that’s what I did. So I got the win, and I got this out of the way.”

On his past three fights, bouncing back from the Ishida, overcoming the adversity of the first-round knockdown against Angulo, and the shoulder injury against Molina:

“I’m a fighter. I’m exactly what the word means. I’m a fighter. I go through the ups and the downs of boxing, but one thing that you know is I come to fight through any type of pain.

“You know, I’m a 100 percent warrior, and I will just keep coming and keep on coming. Now, I’m in a position where I’m in position to fight for a world title. So you’re going to see a totally different Kirkland.

“That’s what I want to show and shed light on. This is going to be one of these unbelievable situations. In my next fight, I’m going to make what people might believe should be a hard fight look easy.

“As far as in the training camp, there are things that I know that I’m going to be able to do that I haven’t in the past.

“I’m going to master it. I’m going to be faster, stronger and lighter on my feet. My movement, the whole nine yards.”

On who he wants to fight next:

“I want Canelo. I want Cornelius Bundrage or I want Canelo Alvarez. In the meantime, I want to get those two big fights and then shoot up to 160.

“I’m enjoying myself at 154, but I think that I could be a lot faster and a lot stronger and have less problems losing that extra weight if I was at 160.

“So imagine what I would be like at 160, without having to drain or stress my body to get down those extra six pounds.

“Plus, I would be eating a lot better. I will be talking to a lot of people about my diet and my exercise before my next upcoming fight.”

On when he believes that he can return to the ring:

“First of all, I’m going to 100 percent do whatever it takes to make sure that my arm is exactly where it’s supposed to be.

So I’m not going to jeopardize anything by saying, ‘let me take this fight too early,’ because my fans or my people say it. I know that we need to make this money.

“But I know that I need to do what it takes as far as what James Kirkland needs to do to rehabilitate himself to the fullest, and that’s exactly what I intend to do. I’m going to stand on that.

“Right now, they’re telling me that I need to take three weeks without doing nothing, and three-to-four months of rehab.

“Then, from there on, I can make that move as far as getting myself back into shape and getting everyting the way that it’s supposed to be as far as my training. So it all depends on that and the time that there is between getting my arm back and my next fight.”