Brandon Rios admits it is bit of a letdown to be facing Richard Abril on April 14 instead of his original opponent, Yuriorkis Gamboa.

However, the undefeated featherweight standout withdrew from what was to be an HBO Championship Boxing main event, leaving Rios with an unknown substitute and forcing promoter Top Rank to turn the card into a split-site pay-per-view show co-headlined by Rios-Abril from the Mandalay Bay in Las Vegas and Juan Manuel Marquez-Sergey Fedchenko from Arena Mexico in Mexico City.

Still, Rios wants his fans to know that he’ll be worth watching even though he’s no longer part of a high-profile fight. Rios’ matchup with Abril isn’t anywhere near as anticipated as the Gamboa showdown was, but that doesn’t mean the unbeaten lightweight slugger isn’t anticipating his return to the ring.

“I’m always excited to fight,” Rios told RingTV.com during a recent media workout at Fortune Gym in Hollywood, Calif. “I love my job. I doesn’t matter who I fight. I’m always going to be the same Brandon, that same guy who puts on exciting fights.

“So it’s still going to be a fun fight for the fans. I’m just a little pissed off that it won’t be Gamboa who I beat on. I was motivated to shut his mouth, but I guess he got cold feet.”

Enter Abril (17-2-1, 8 KOs), a 29-year-old Miami-based Cuban who has won five consecutive bouts since dropping a 10-round split decision to then-unbeaten prospect Henry Lundy in January of 2010. The nearly 6-foot boxer’s is coming off an impressive unanimous decision over former WBA lightweight titleholder Miguel Acosta last October. Acosta, who gave Rios fits in the early going of their entertaining title bout last February before being overwhelmed in the late rounds, was dropped three times by Abril, who was awarded the WBA’s “interim” title for his effort.

Rios, who made one defense of the WBA title he won from Acosta (a third-round KO of Urbano Antillon) before losing the belt on the scales prior to stopping John Murray in 11 rounds last November, says he was unaware of Abril until the Cuban confronted him at the Miami press conference that was supposed to announce the Gamboa fight. 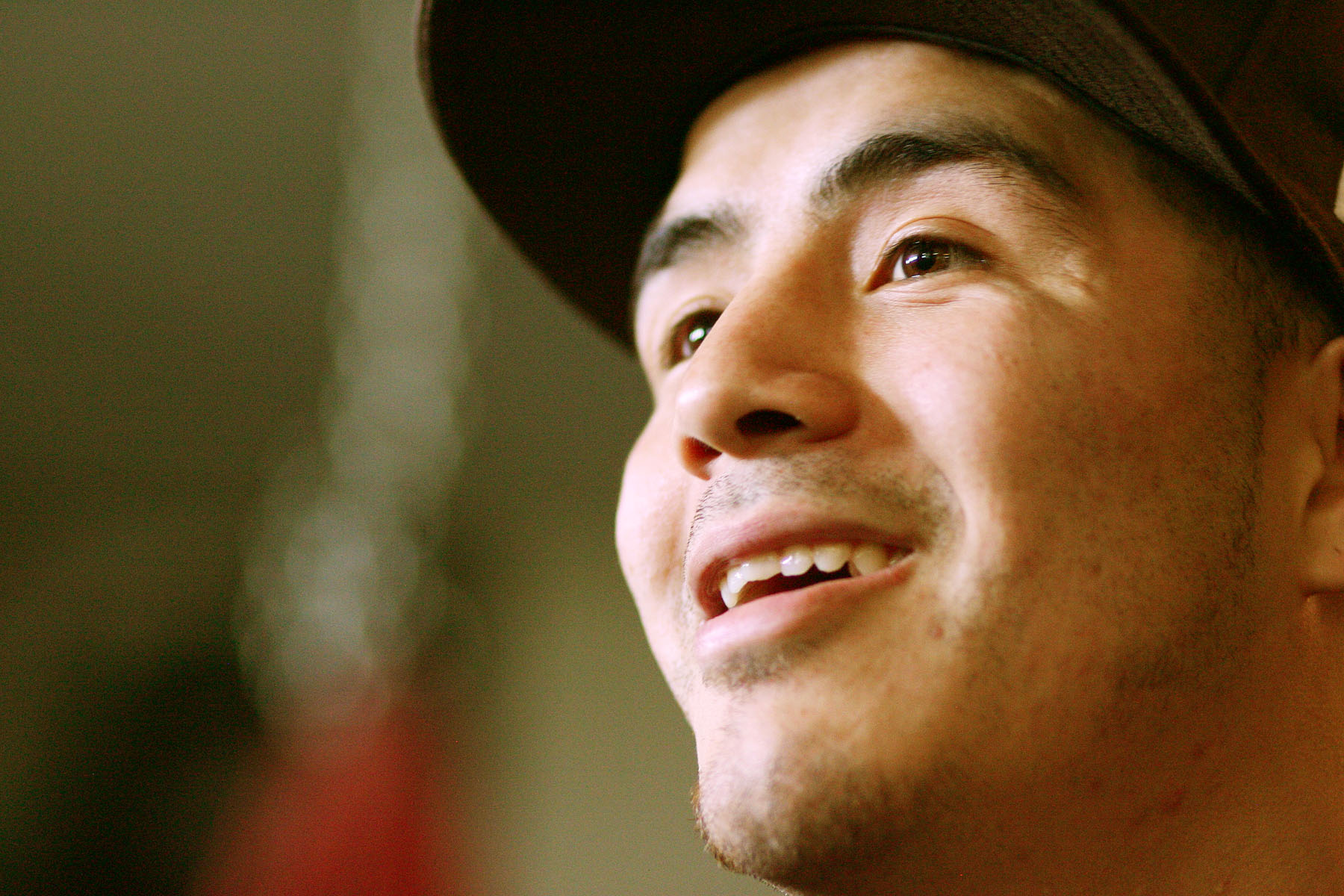 “He says he’s the real WBA champ and all this mess. He kept talking, talking, talking, and I talked back to him in English, which he didn’t like. We got closer and closer and then he pushed me. I didn’t even have time to do anything back because he was gone. He took off.”

So if you think Rios is not motivated to fight this little-known substitute, think again.

Rios says he hasn’t seen much footage of Abril, apart from a few fight highlights on Youtube.com, but his trainer Robert Garcia has watched two of the fringe contender’s complete bouts on tape. The former 130-pound titleholder is confident Rios can handle Abril, although he admits that the Cuban’s style may trouble his pressure fighter in the early rounds.

“He’s a difficult fighter,” Garcia said. “Abril is a very tall and rangy boxer. He’ll try to stick and move and hit Brandon with long punches, but Brandon’s a beast and he’s got 12 rounds to work with. The early rounds might be difficult, just as they were when Brandon fought Acosta, but he’ll do what he always does – break the other guy down.”

And entertain fans while he does it.

Apart from Abril’s brash press conference challenge, another motivating factor for Rios is regaining his WBA title. The vacant belt Rios lost by not making the lightweight division limit of 135 pounds prior to his fight with Murray is on the line for the winner of their scheduled 12-round bout.

“I won the fight with Murray but it was like I lost because I didn’t take home my belt,” Rios said. “I want it back. I can’t let Abril go around calling himself ‘the champ.'”

There’s more incentive for Rios to win on April 14. His promoter, Bob Arum, has discussed staging a 140-pound showdown with Marquez on July 14 at Cowboys Stadium in Dallas, Texas, if both get by their next opponents. Marquez’s bout with Fedchenko is for the WBO’s vacant interim 140-pound title.

Rios has heard the talk but insists he’s focused on Abril.

“I’m not concerned about (Marquez) right now,” he said. “It sounds like a great fight and I’d love to do it, but Abril is next. My job is to get ready for the fight that’s in front of me. It’s (manager) Cameron Dunkin’s job to think about the next fight.”

The Marquez/Rios co-headliner is supported by a scheduled 12-round bout between Mike Alvarado, an undefeated RING-rated junior welterweight, and Mauricio Herrera, a tough and cagey Southern Californian who upset two 140-pound prospects (Ruslan Provodnikov and Mike Dallas Jr.) last year.

Like Marquez and Rios, Alvarado (32-0, 23 KOs) is known for making good fights. The 31-year-old Colorado native’s last bout was a bloody, come-from-behind 10th-round stoppage of Breidis Prescott on the undercard of the Manny Pacquiao-Marquez III pay-per-view show last November.

Alvarado, who has been training in the Los Angeles area – where he’s sparred with IBF lightweight beltholder Miguel Vazquez, Sergio Mora and Alfonso Gomez at the Azteca Boxing Club and Mora’s Montebello-based gym – says he’s in the best shape of his career.

“I haven’t felt this good and this prepared for a fight in a long time,” said Alvarado, who attended the Fortune Gym 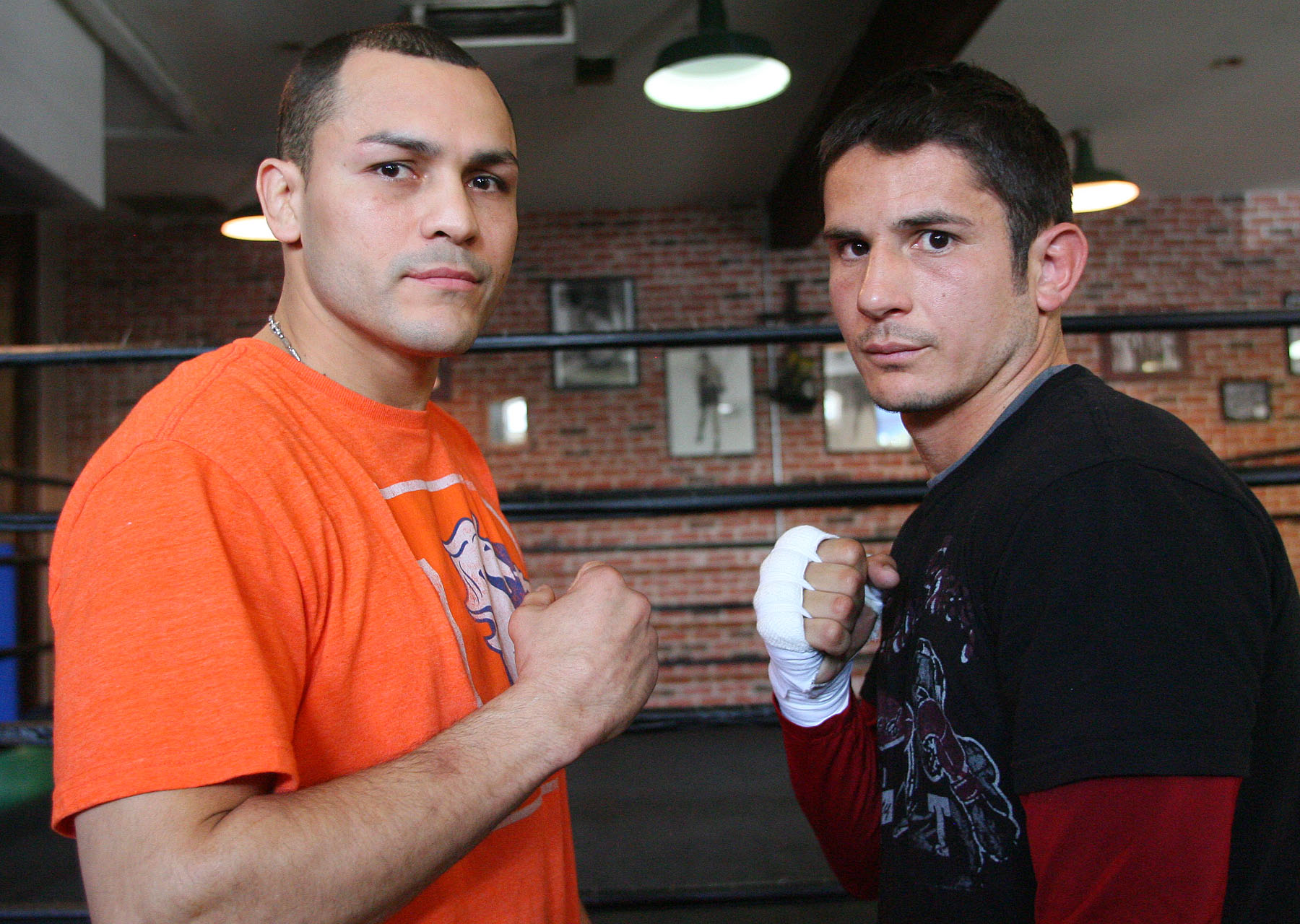 media workout with Herrera. “Fans can expect to see the warrior they saw in the Prescott fight but with better stamina and a new skill set.”

Herrera (18-1, 8 KOs), of Lake Elsinore, Calif., says he had a great camp at the Arlanza Boxing Club in Riverside, Calif., and the 31-year-old boxer believes his crafty style will befuddle Alvarado as it did Provodnikov and Dallas.

“He’s in for a fight,” Herrera said. “My awkwardness, my jab and my movement will frustrate him, but I’ll do more than box. The plan is to do a little bit of everything. I’ll stick and move and I’ll stand and fight. We’ll give him everything and see if he can take it.”

The broadcast team for the show, which goes for the suggested retail price of $44.95, will be former Friday Night Fights studio anchor Brian Kenny (play by play), veteran commentator Rich Marotta (analyst), and former junior middleweight titleholder Raul Marquez (color), with an assist from TopRank.com’s Crystina Poncher, who will provide backstage and locker room interviews.