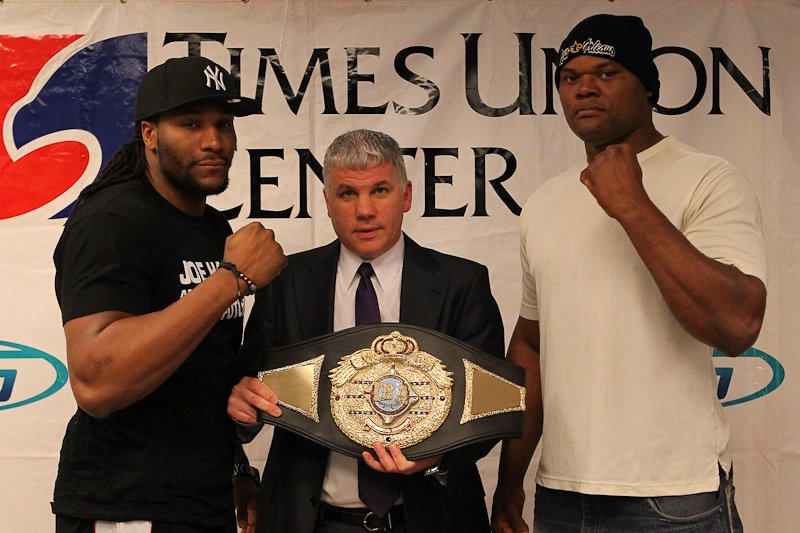 Undefeated heavyweight prospect Joe Hanks (left) poses with promoter Joe DeGuardia (center) and Rafael Pedro (right), who he will fight in the main event of a Star Boxing card at the Times Union Center in Albany, N.Y., on Saturday.

Joe Hanks has yet to fight on national television but the undefeated heavyweight prospect still commands attention when he is in the gym or in the ring, thanks to his imposing physique and impressive athletic ability.

Outside of the ring, Hanks (18-0, 12 knockouts), who headlines a non-televised card in Albany, N.Y., on Saturday, turns heads with his personality. The 28-year-old New Jersey native is articulate, engaging and funny.

With his long dreadlocks, muscular 6-foot-4 frame and decidedly East Coast accent, Hanks is bound to remind hardcore fans of Shannon Briggs, an unavoidable reality that he’s well aware of.

“I’ve been getting that my whole career,” Hanks laughed during a recent workout at The Rock gym in Carson, Calif. “Some people stop me on the street thinking I’m Lennox Lewis.”

It remains to be seen if Hanks, who moved from his home in Newark, N.J., to Los Angeles three years ago, can even come close to emulating the hall-of-fame achievements of the former heavyweight champ, or even Briggs’ considerable accomplishments, but it’s obvious that the American heavyweight hopeful has the tools to be successful, perhaps even famous.

That’s why Joe DeGuardia, president of Star Boxing, was eager to sign Hanks last January despite the heavyweight’s late start in boxing and his under-the-radar status in the sport.

“I look for certain qualities in the fighters I sign, and Joe has the right qualities inside and outside of the ring,” DeGuardia said. “I think he can be as good as Shannon Briggs was because he’s a talented athlete and he’s got a dedicated work ethic. He’s learned a lot in a short time as a pro.

“But he’s also charismatic. I think he’s a marketable fighter, somebody who can one day carry the mantle for the American heavyweight.”

DeGuardia might be getting ahead of himself with that last notion. It doesn’t matter how talented or personable a fighter is; if he isn’t on TV, it’s going to be awfully hard for fans to get behind him or to advance his career.

However, the Bronx, N.Y.-based promoter says Hanks’ days of fighting off TV will end in 2012.

“This will be the year to showcase him on TV and step up awareness of how good he is,” DeGaurdia said.

How good is Hanks? He’s passed a couple minor tests since jumping directly from six-round competition to the 10-round level last year.

Hanks scored a unanimous six-round decision over fellow undefeated (10-0) prospect Ashanti Jordan, a three-time San Francisco Golden Gloves champ that Golden Boy Promotions had signed, back in 2009 when he was 8-0. 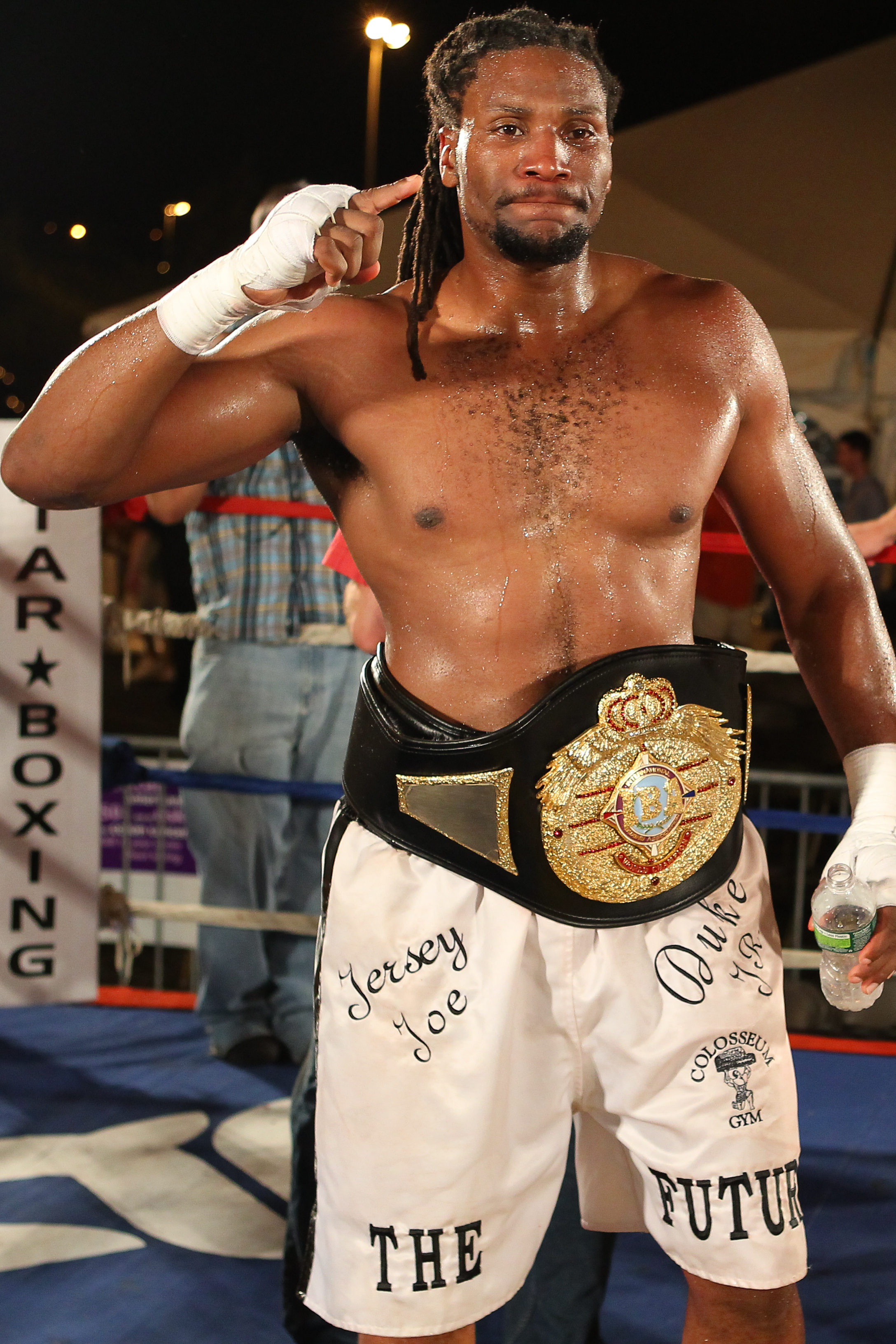 “Ashanti beat me in the amateurs, in my first national tournament,” said Hanks, a high school basketball standout who began boxing at age 19 and only fought 25 amateur bouts. “I thought I beat him in that amateur bout so I had something to prove that night. Plus, the promoter of that card put me in the ‘opponent’ locker room and corner, so I was mad.

“I took it to him even though I was still gaining experience at the time. I shut him out on one card.”

Hanks shut out Escalera (18-3-1) on all three official scorecards, but he says he had to work hard for the victory in his first 10-round bout.

“He came to fight,” Hanks said. “We fought hard for 10 rounds. I guess he felt strong from not having to make the 200-pound limit because we went at it, but I kept my technique sharp and picked up the pace in the late rounds.”

“I think Seth Mitchell is the perfect opponent for Joe,” DeGuardia said. “I think Hanks-Mitchell is a good TV fight. The only question is if Seth Mitchell’s people want him to be in a fight that he could lose. They may not want that. If so, we’ll keep moving Joe until someone is ready to step up.”

For now, that means having Hanks face Rafael Pedro (21-9-1, 15 KOs), a 6-foot-7 Cuban journeyman, in the main event at Albany’s Times Union Center on Saturday. DeGaurdia likes the fight because of the large size of both the opponent and the venue.

“I also want him to get used to fighting big, tall guys. Pedro can weigh as much as 300 pounds, and I’m not talking about a ‘fat 300.’ He’s a giant with a lot of knockouts on his record.”

It’s not hard to figure out why DeGuardia wants Hanks to get used to fighting opponents who are bigger than he is.

“Right now in heavyweight boxing, you’ve got the Klitschko brothers and everyone else,” said DeGuardia, who has witnessed two of his fighters – Kevin Johnson and Albert Sosnowski – fail in title challenges to WBC beltholder Vitali Klitschko. “Aside from the Klitschkos, I think he can hang with anybody in the division.”

However, Hanks, who is very familiar with the Ukrainian brothers from having sparred both, isn’t in a rush to face them or his American heavyweight contemporaries.

“I’m all for American heavyweights, I support them,” Hanks said. “It’s just a matter of time before my path will cross with Seth Mitchell and Deontay Wilder and the others. Until then, I’ll be rooting for them. I’m going to back them up and help them all I can if they want or ever need my help.

“That’s what the European heavyweights do,” continued Hanks, who served as a sparring partner in three of RING heavyweight champ Wladimir Klitschko’s camps before his first pro bout. “They work with each other in the gym, learn from each other, and they get better.

“Over here in the U.S., we’re so busy not working with each other and calling each other out on the internet in hopes creating interest in small-money fights on ESPN that we miss the big picture. We’re not growing. Because of the past success of American heavyweights, we became complacent while the European heavyweights continued to evolve in every facet of the sport.”

With or without the support of his fellow American heavyweights, Hanks says he will continue to evolve his own craft. And when fans finally see him on TV for the first time, they will remember him for more than his dreadlocks.

“It may not happen in my next few fights, but when I do get that TV exposure I’ll be more prepared for the opportunity,” Hanks said. “When my coming out party happens I want fans to say ‘Wow! Who is that guy and where has he been?'”