Mayweather-Cotto targeted for May 5 at the MGM Grand 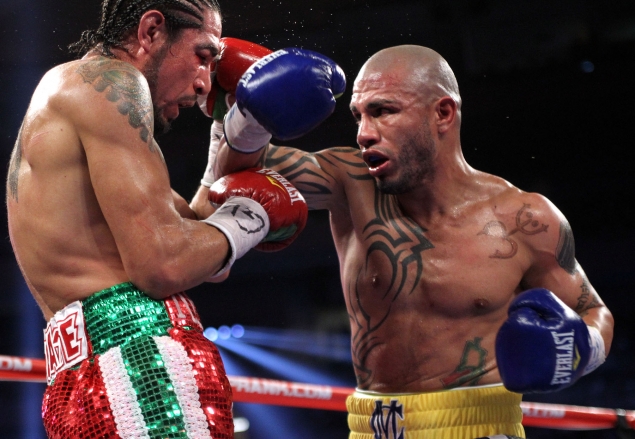 Miguel Cotto’s advisor, Gaby Penagaricano, confirmed that the WBA junior middlweight beltholder has agreed in principle to the terms of a defense of his belt against WBC welterweight titleholder Floyd Mayweather Jr. on May 5 at the MGM Grand in Las Vegas.

“We have an agreement in principle. There’s nothing signed yet. But we have the structure of the deal agreed upon in principle. We’re still working on it, but it’s only a formality and the documents just need to be finalized. The fight will be at 154 pounds,” said Pengaricano.

“Miguel is very happy and that’s his position that he’s taken since his first fight. He’s always ready for the big challenge and the big names, and he’s never ducked anyone. He’s always faced the tough competition that has been in front of him, and that’s exactly what he’s going to do for this fight.”

Mayweather (42-0, 26 knockouts) announced his intention of pursuing his eighth title belt over five weight classes against Cotto (37-2, 30 KOs) on Wednesday during a hearing in which a five-member Nevada State Athletic Commission voted unanimously to grant Mayweather a one-fight, conditional license.

Mayweather, who turns 35 next month, has postponed jail time which threatened his announced plan to return to the ring on the target date, his agreement to not contest the sentence being one of the conditions for his license.

Mayweather will begin serving his sentence on June 1 after the completion of the fight, which will be on pay per view, although a network has not been selected.

“We’re obviously very excited. This is a mega fight and a super fight and they’re always that way when it comes to a Floyd Mayweather fight. Miguel Cotto is one of the top three pay per view stars. So you have two top pay per view stars fighting each other on this big weekend, May 5, which is truly the Super Bowl of boxing,” said Golden Boy Promotions CEO, Richard Schaefer.

“So I’m very, very excited. When Miguel Cotto fights, it’s always a great fight. He’s one of the most entertaining fighters, and when Floyd Mayweather fights, it’s always the best, and he’s also the pound-for-pound king. So to have these two guys go at it, it’s going to be clearly the biggest pay per view event this year.”

Coming off of a fourth-round knockout of Victor Ortiz in September that earned him his seventh crown and the WBC’s title belt, Mayweather will make only his second-ever appearance as a junior middleweight since earning the division’s WBC belt by split-decision over Oscar De La Hoya in May of 2007.

“Miguel Cotto is a world class fighter who can never be taken for granted and continues to prove he is one of the best in boxing. It will be a challenge for me to compete with him at this weight,” said Mayweather, who weighed 150 pounds against De La Hoya.

“But this is the type of test I thrive on and gives me the motivation to train even harder. I have no doubt in my mind that my title belt collection will increase once again and Cotto’s reign as champion will come to an end on May 5.”