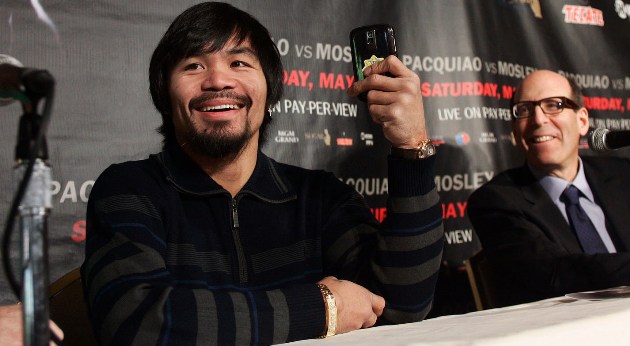 Top Rank CEO Bob Arum told RingTV.com on Wednesday that he hopes to finalize a clash for June 9 between WBO welterweight beltholder Manny Pacquiao and WBO junior welterweight titleholder Tim Bradley as soon as this weekend.

Arum said that he is looking to complete the Pacquiao-Bradley deal in San Antonio, Texas, where he will be promoting Julio Cesar Chavez Jr’s HBO-televised defense of his WBC belt opposite Marco Antonio Rubio, and Nonito Donaire’s 122-pound debut against Wilfredo Vazquez Jr. at the Alamodome. Donaire-Vazquez will be for the vacant WBO junior featherweight belt.

“Michael Koncz and Cameron and everybody will be in San Antonio. We’re going there and I’m meeting with Cameron and Michael Koncz to see how far we can go toward wrapping up a Tim Bradley fight,” said Arum, who promotes both fighters.

The Pacquiao-Bradley fight may be closer to fruition now that WBA junior middleweight Miguel Cotto is out of the picture, having been chosen on Wednesday by Floyd Mayweather Jr. as his May 5 opponent.

Mayweather already had been dismissed by Arum and Koncz as an a potential opponent, given that Mayweather is slated to begin serving an 87-day jail sentence on June 1 and Pacquiao’s desire to fight on June 9.

Koncz, however, agreed that Bradley is not a definite.

“We will be talking about the fight this weekend, however, we have not committed to Bradley,” said Koncz. “We still have the three of them. We’ve got Bradley, we’ve got Marquez and we’ve got Peterson.”

Arum said that he also made an offer to manager and trainer, Barry Hunter, on Wednesday for IBF/WBA junior welterweight titleholder Lamont Peterson to face RING lightweight champion Juan Manuel Marquez at the Dallas Cowboys’ Stadium on July 14.

The Marquez-Peterson winner would get a shot at the winner of Pacquiao-Bradley.

“We haven’t made a deal yet, but I talked to Barry this morning and hopefully that will come together for July 14,” said Arum. “Hopefully, we’ll be able to conclude July 14 for Cowboys Stadium. We’re holding Cowboys Stadium for the Marquez-Peterson fight.”

Hunter acknowledged the call from Arum, even as he said that he still is entertaining an entreaty from Golden Boy Promotions CEO Richard Schaefer offering a hefty sum for Peterson to have a return bout with Amir Khan, whom Peterson dethroned as IBF/WBA titleholder by disputed split-decision last month.

Schaefer told RingTV.com on Friday that he “offered [Peterson] $1.5 million and we offered him a 50-50 split of world-wide revenues” to face Khan.

Hunter has acknowledged that Peterson favors a rematch with Khan, but would not elaborate on whether or not he considered one scenario more finanicially favorable — the one with Marquez or the one with Khan. 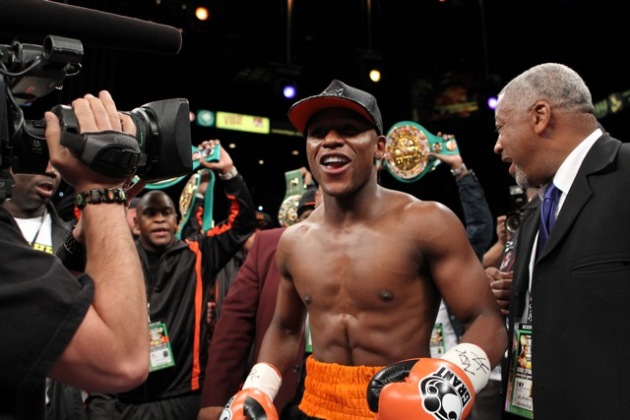 Cotto was dethroned as WBO welterweight beltholder by Pacquiao in November of 2009, when he was stopped in the 12th round by the Flilipino star. Having initially dismissed Cotto as Pacquiao’s “leftovers,” Mayweather defended his selection on his Facebook page on Wednesday.

“I’m fighting Miguel Cotto on May 5th,” wrote Mayweather, “because Miss Pac Man is ducking me.”

“We wish Miguel the best. He’s a terrific kid. He’s a very good fighter,” said Arum. “He got a very good offer on the fight. We advocated for him that he should take it. We just wish him the best.”