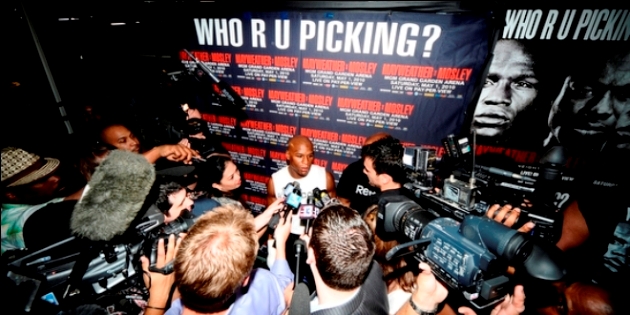 The five chairmen of the Nevada State Athletic Commission voted unanimously on Wednesday to grant a one-fight, conditional license to unbeaten WBC welterweight beltholder Floyd Mayweather Jr., who also announced during the hearing that he will face WBA junior middleweight titleholder Miguel Cotto in his next bout on May 5 at the MGM Grand in Las Vegas.

Among the five conditions for Mayweather (42-0, 26 knockouts), who postponed a jail sentence in order to fulfill his announced plan to return to the ring on May 5, are that he must show up to serve his time on June 1, promise not to contest it after his fight with Cotto, and avoid any brushes with the law.

Saying “I will surrender on June 1,” Mayweather promised to turn himself in on the designated date to begin his jail sentence in accordance with the courts’ mandate.

Mayweather re-applied for the Nevada license on Jan. 23 in order to have it reviewed on Wednesday by the NSAC.

Executive Director Keith Kizer said that every fighter’s license expires on Dec. 31 of every year, and it seemed a forgone conclusion that Mayweather would be re-affirmed.

Although he said that it was “fair” that he had to appear before the commission given his out-of-the ring actions, Mayweather, nevertheless, was grilled about his conduct related to his guilty plea to charges of misdemeanor battery domestic violence and no contest on two counts of harassment in a case involving the mother of two of his children, Josie Harris.

During the hearing, officials suggested that Mayweather work with Kizer to inspire amateur boxers, even as he addressed his role as a community activist in Las Vegas and contended that the media unfairly judges him based on his sometimes outlandish antics on HBO’s 24/7 series.

“I’ve given back for 10 years to Las Vegas,” said Mayweather. “But it’s only just recently that the media has caught wind of it.”

Mayweather mentioned his recent $100,000 donation to the Susan G. Komen foundation fighting breast cancer, his work with Habitat for Humanity and his presence as a speaker at local schools, among other things.

Mayweather was supposed to do 40 hours of service with Habitat for Humanity by Jan. 31 as part of a North Carolina judge’s order resulting from the fighter’s failure to appear for a deposition in a music rights lawsuit. The charitable organization said last month that it had heard nothing from Mayweather.

On the deadline for his service, though, Mayweather announced his intention to donate $100,000 to the organization. Both this and the Susan G. Komen gift came after the postponement deal he made with a Las Vegas judge, his lawyers citing the economic impact a May 5 event would have in Las Vegas.

“I talk to children at elementary schools, and I feed the less fortunate,” said Mayweather. “I don’t want to just go and give them money. I want to go and spend time with them.”

In relation to Harris, Mayweather explained that he was not beating her but only restraining his girlfriend, whom he said was under the influence of drugs and alchol.

Claiming that he he only uses his fists as a professional in the ring, Mayweather said that he does not lay a hand on his children because of the way he was treated by his parents as a youth.

Mayweather’s mother had issues with drugs, and his father and former trainer, Floyd Mayweather Sr., served jail time during a critical portion of Mayweather’s early life.

Mayweather said that he felt that his children were “coached” during the fact-finding investigation process leading up to his trial, and that he accepted the plea bargain because he did not want to “put my children on stand.”

Mayweather is coming off of a fourth-round knockout of Victor Ortiz in September that earned him the WBC’s title belt, his seventh career crown.